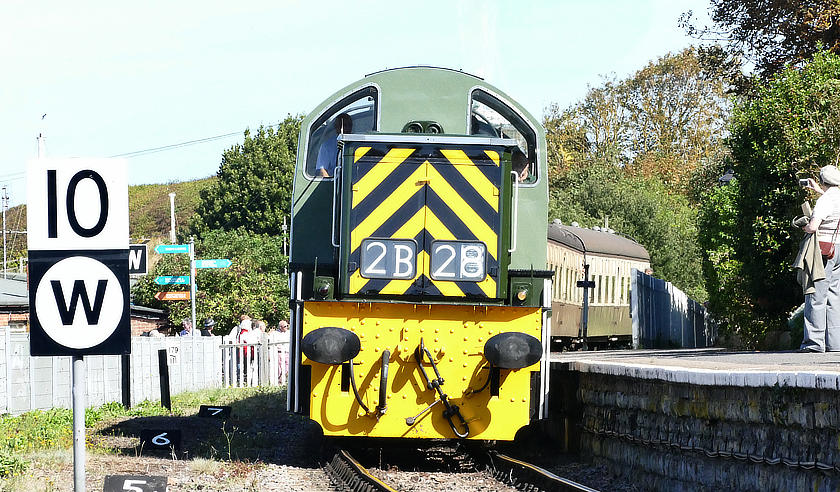 The steam-hauled public services from Bishops Lydeard (BL) to Watchet (WT) will stop at Williton to attach the booked Diesel to the rear of the train. Upon arrival at Watchet and after the passengers have disembarked, the Diesel will haul the Empty Coaching Stock (ECS) and steam loco back to Williton where the two locos will change places. Then, the Diesel will haul the ECS and loco back to Watchet to pick up the passengers. On the return leg, the steam loco will lead and the Diesel will be uncoupled and will remain at Williton. These special arrangements are necessary because there is no passing loop at Watchet so the loco cannot run around its train while there.

Class 14 D9526 will cover the Saturday working but Class 33 D6566 is the booked diesel for these top-n-tail workings to Watchet that continue through to Wednesday 2nd June. The timings for these workings are as follows:

As above except there is no crew training working so Class 33 D6566 will be the booked Diesel and the timings are brought forward by one hour as follows:

Timings as Saturday 29th May except there is no crew training working so Class 33 D6566 will be the booked Diesel.

Other workings may take place. The railway is to be considered as LIVE at all times.

The webcams provide a very good way of watching the action from afar. Here are the links:

Many thanks to Railcam UK and the WSR for providing these webcam services.

Interesting workings ? Click here to buy a ticket to ride.

Thank you very much for supporting the DEPG and the WSR !