Further progress was made towards the ‘new normal’ by the extension of WSR services from Williton to Watchet on Saturday 29th May, with Class 14 ‘Teddy Bear’ D9526 providing the additional ‘top and tail’ traction between the two stations. The reason for having a loco at each end of the train is because there is no passing loop at Watchet, so the steam-hauled arrival has to be hauled back to Williton where the diesel will come off and the steam loco will run around for the return journey to Bishops Lydeard. 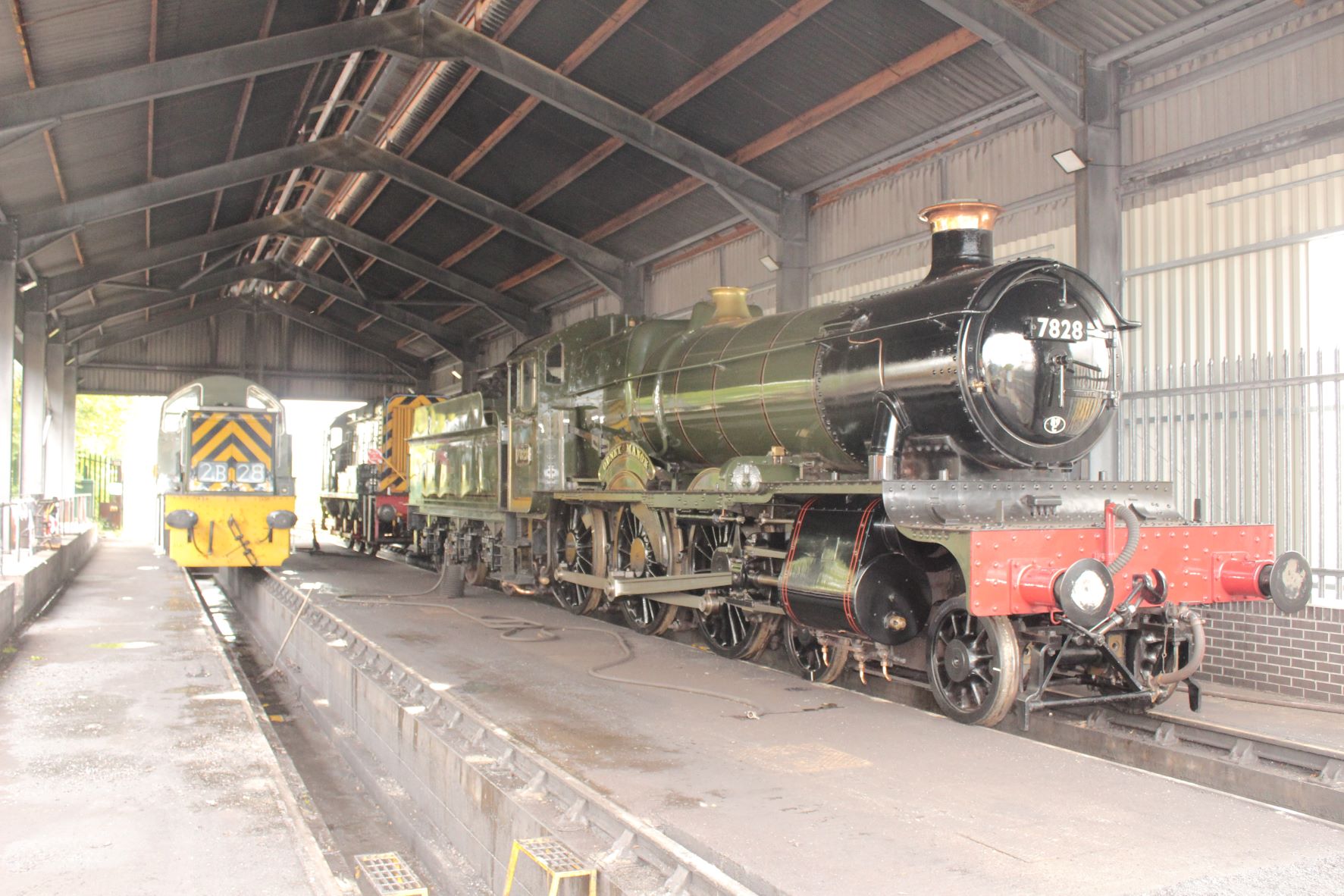 To allow the passengers an hour to stretch their legs at Watchet, the Empty Coaching Stock (ECS) will be hauled back from Watchet to Williton, a distance of 1.7 miles, so that the locos can change places for the return leg. The diesel will then haul the ECS back to Watchet and remain at the rear when departing from Watchet. The train will stop at Williton for a few minutes so that the diesel can be detached. This repeats twice daily under the ORANGE and YELLOW timetables that are in force through to Wednesday 2nd June. See our DIESELGEN posting for timings and details.

To facilitate the extension to Watchet, it was necessary to perform route refresher training for the drivers, guards and secondmen that will be involved, so a special working took place on Friday 28th May using the Hawkworth-designed Taunton Inspector’s Observation Saloon W80976W with haulage provided by Class 33 ‘Crompton’ D6566 (33 048). For the outbound leg of the journey, D6566 was propelling the inspection saloon from the rear while towing three ‘Dogfish’ hopper wagons, which were deposited at the Dunster Permanent Way Depot. This route refresher working was repeated on Saturday 29th  – but this time, without the hopper wagons. 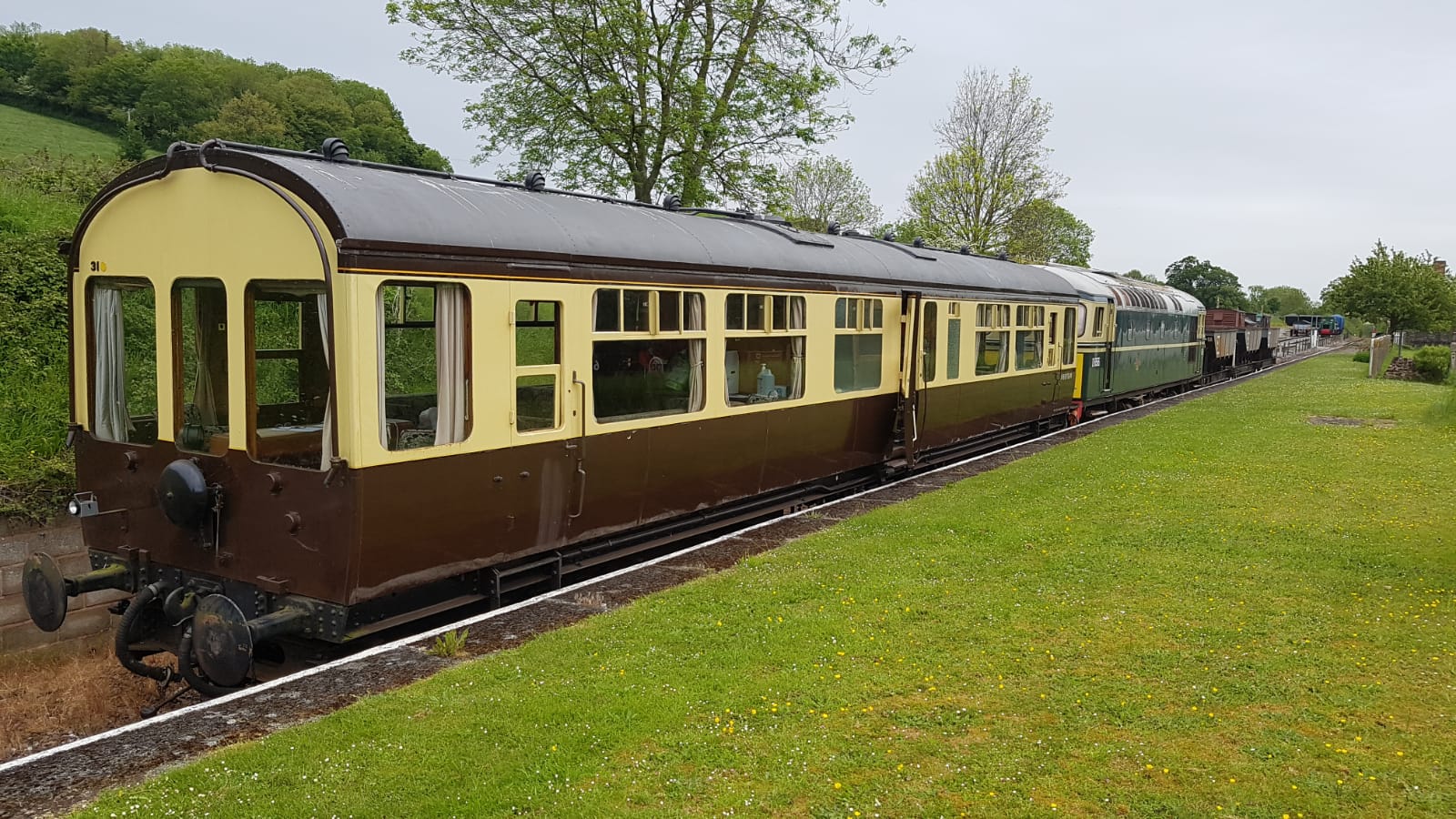 The staff training ‘officers inspection special’ pauses at Washford on Friday 28th May 2021 after being propelled from Williton by Class 33 ‘Crompton’ D6566 (33 048) – with three ‘Dogfish’ hopper wagons in tow. Photo by Martin Howard © CC BY-NC 3.0 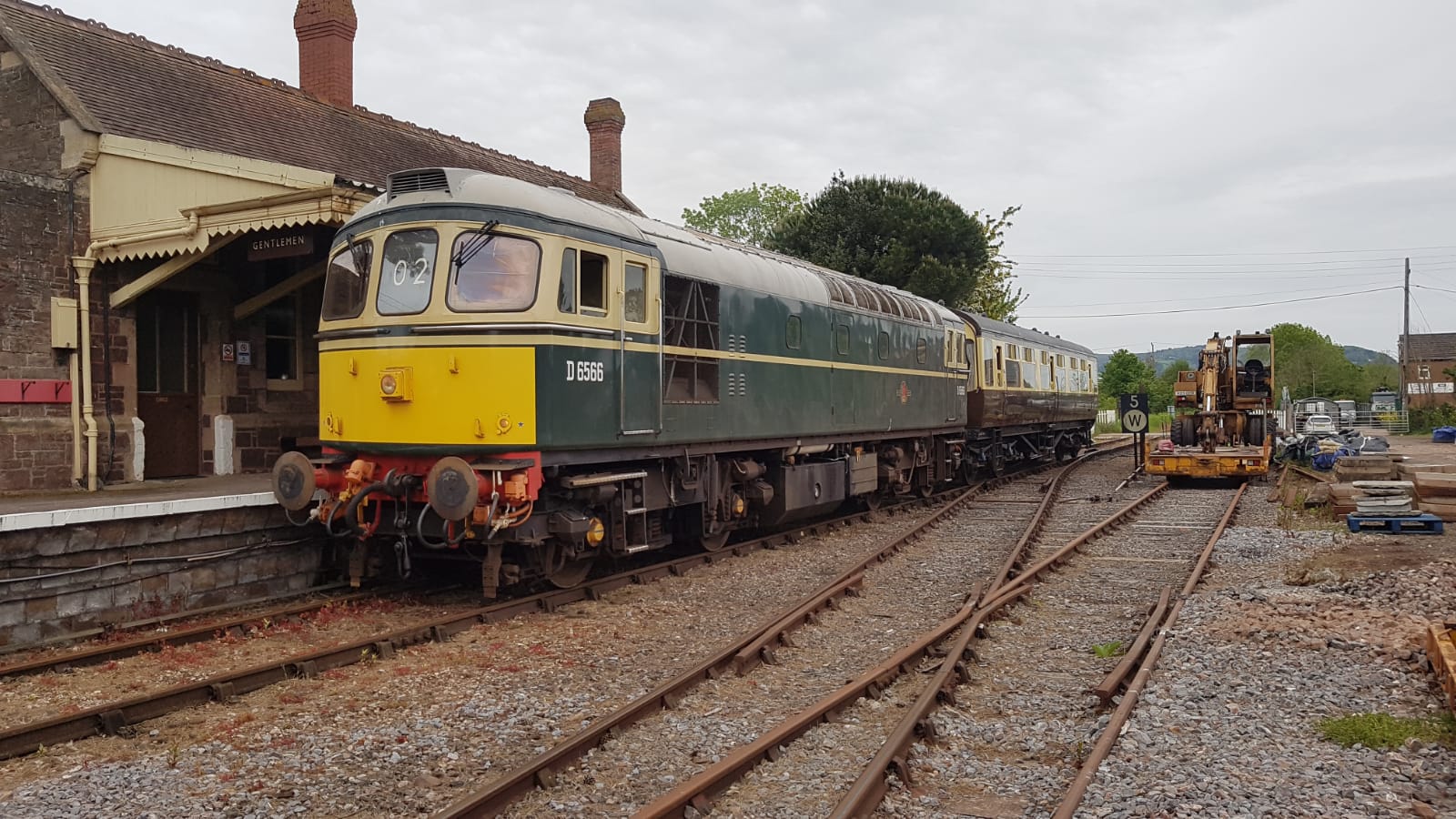 Class 33 D6566 (33 048) prepares to depart from Dunster with the ‘officers inspection special’ route refresher working to Williton on Friday 28th May 2021 – after depositing the ‘Dogfish’ ballast hoppers in the yard. Photo by Martin Howard © CC BY-NC 3.0

Class 33 ‘Crompton’ D6566 (33 048) will be covering the top-and-tail duties on the Watchet services from Sunday 30th through to Wednesday 2nd June 2021. Watch out for the news of our next diesel running dates by keeping an eye on our website or signing up for our DIESELGEN bulletin service.

Class 47 47077 ‘NORTH STAR’ – further progress has been made on this loco after a lengthy engine run last weekend, during which a thorough inspection of air and vacuum systems was made. Luckily, no major issues were found, but a number of snags were uncovered in other systems, each of which will get attention during the coming days.

One such issue was a leaking radiator element, most probably damaged during the refitting of the cooler group shutter assemblies during the previous weekend. This was quickly dealt with by Terry and the ‘Tuesday team’ and will be tested during the next engine run. 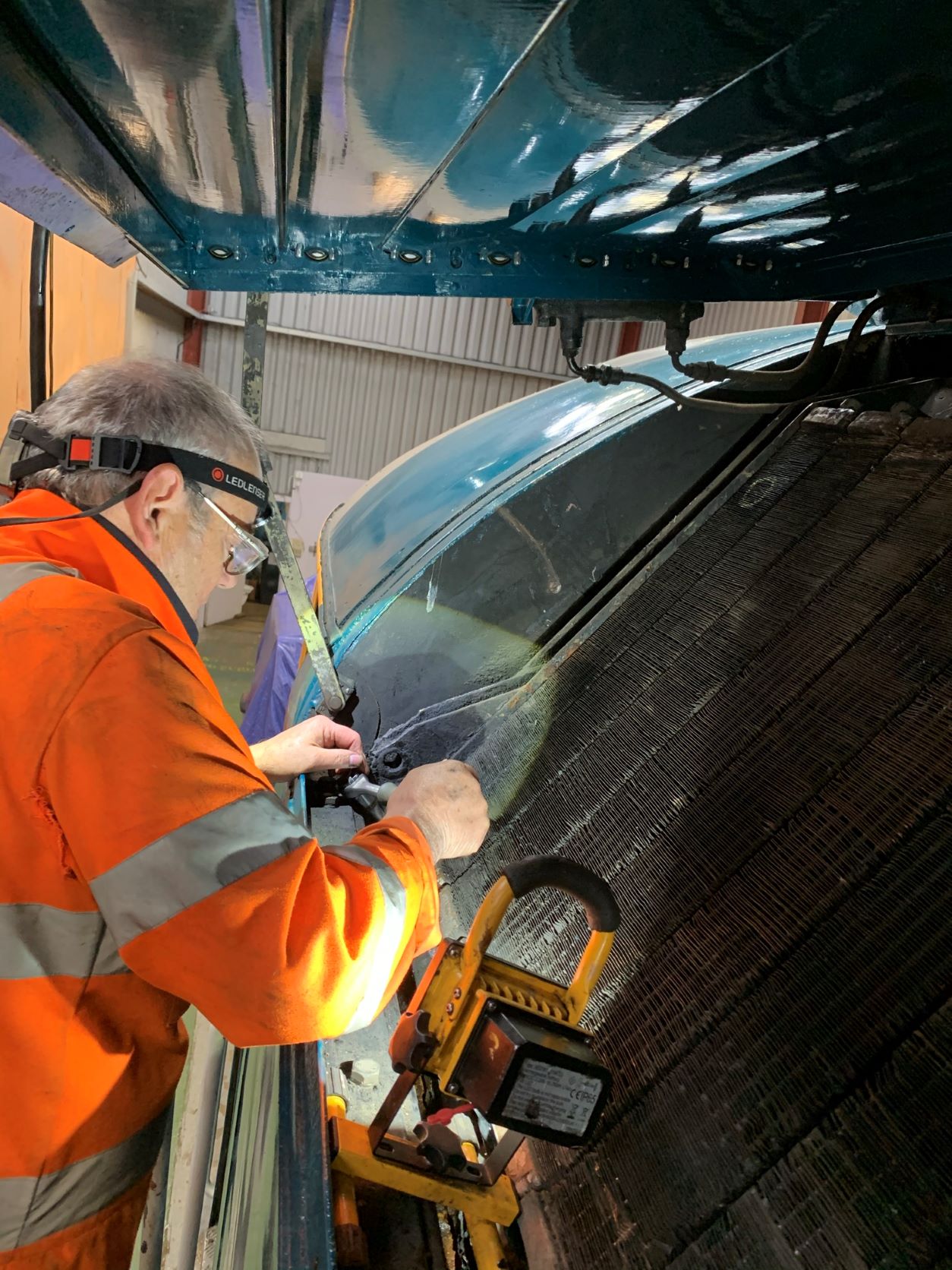 Further progress was made with the refitting of two access panels in the roof of the former boiler room, the cleaning and painting of both cabs and a number of other small jobs. This weekend, we will be dealing with some electrical tasks including the completion and closure of the battery boxes. All together, it adds up to a lot of progress, so thanks go out again to our volunteers who paused their work on their ‘normal’ projects to lend a hand on the ’47’.

Class 33 ‘Crompton’ D6575 was under investigation from Ian and Tom in connection with a low fuel pressure issue that was causing the loco to exhibit signs of fuel starvation when operating under load. The suction pipe from the fuel tank was under suspicion and tests quickly confirmed that this was causing the problem. The solution was to run a new flexible suction line into the fuel tank, using the old fixed pipework as a guide. The loco is now restored to full power and is available for traffic if called upon.

Class 52 D1010 ‘WESTERN CAMPAIGNER’ – this loco is being prepared for an engine run and a yard shunt that will take place on the weekend of 5th June, following which D1010 will go under cover in place of 47077 so that body repairs can commence. Do you have your copy of our new booklet “D1010 WESTERN CAMPAIGNER – FROM MEREHEAD TO MINEHEAD” ? All of the revenue from the sales of this booklet will go into the D1010 restoration fund, along with revenue from sales of pre-owned books, so please help the fund grow by buying from our online store. Thanks !

Class 14 ‘Teddy Bear’ D9518 – the ‘Tuesday team’ have been hard at work restoring one of the four sets of steps and fabricating another from scratch! The below photo shows the restored set drying after a coat of primer. We are grateful for the restoration and fabrication skills of our new volunteers Colin F, Chris and Mark, all of whom are busy restoring multiple parts of the loco, with more parts being lined up for attention to keep the momentum going. 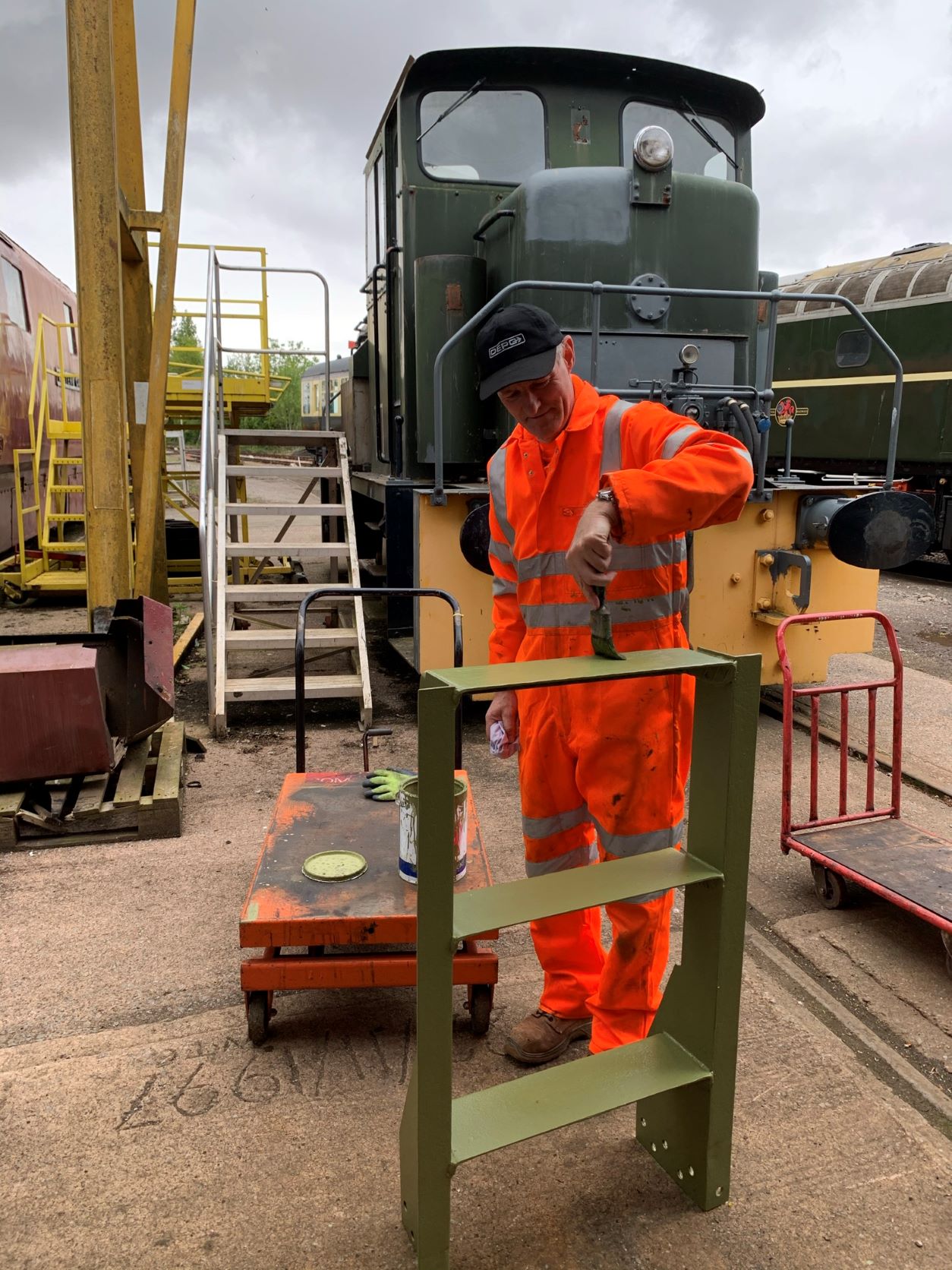 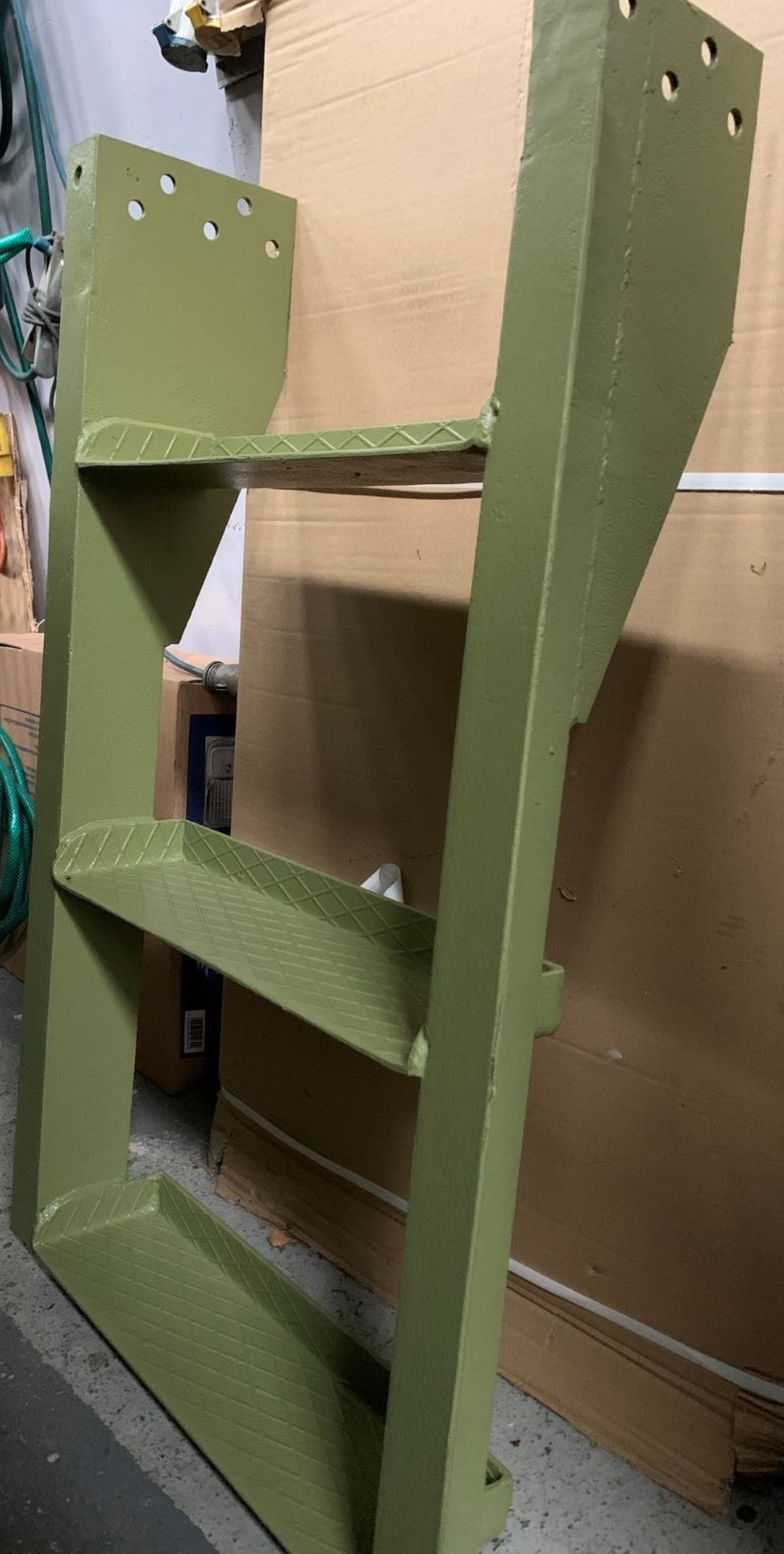 Restored set of steps for Class 14 ‘Teddy Bear’ D9518 after being painting with primer by Chris L of the ‘Tuesday team’. Photo by Andy Royal © CC BY-NC 3.0

Many thanks to all of our volunteers who are hard at work maintaining, restoring, shifting, managing and fund raising for our fleet of heritage locomotives !