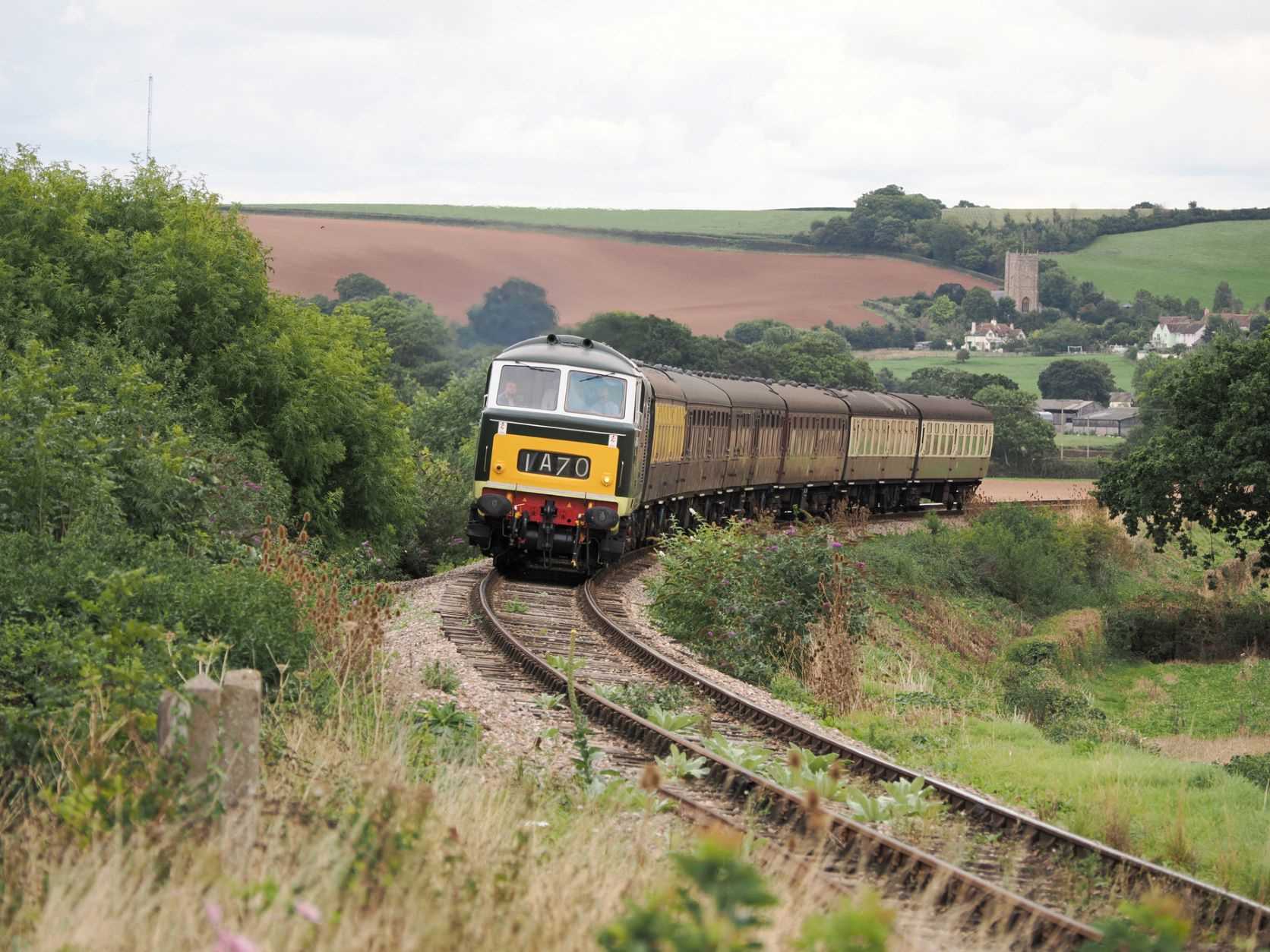 Last weekend was the end of scheduled diesel-hydraulic-haulage this season, as Class 35 ‘Hymek’ D7018 has now returned to Williton to undergo transmission control block investigation work after running the entire season locked in second gear. Although her engine was limited to 1200 rpm instead of the usual 1500 rpm, reducing power to prevent overheating during standing starts, the ‘Hymek’ has performed all of it its duties in style and with a decent amount of ‘Maybach Music’ accompaniment.

Here’s a short video that we have posted on our DEPG YouTube channel. Click here or on the image below to watch this video on YouTube: 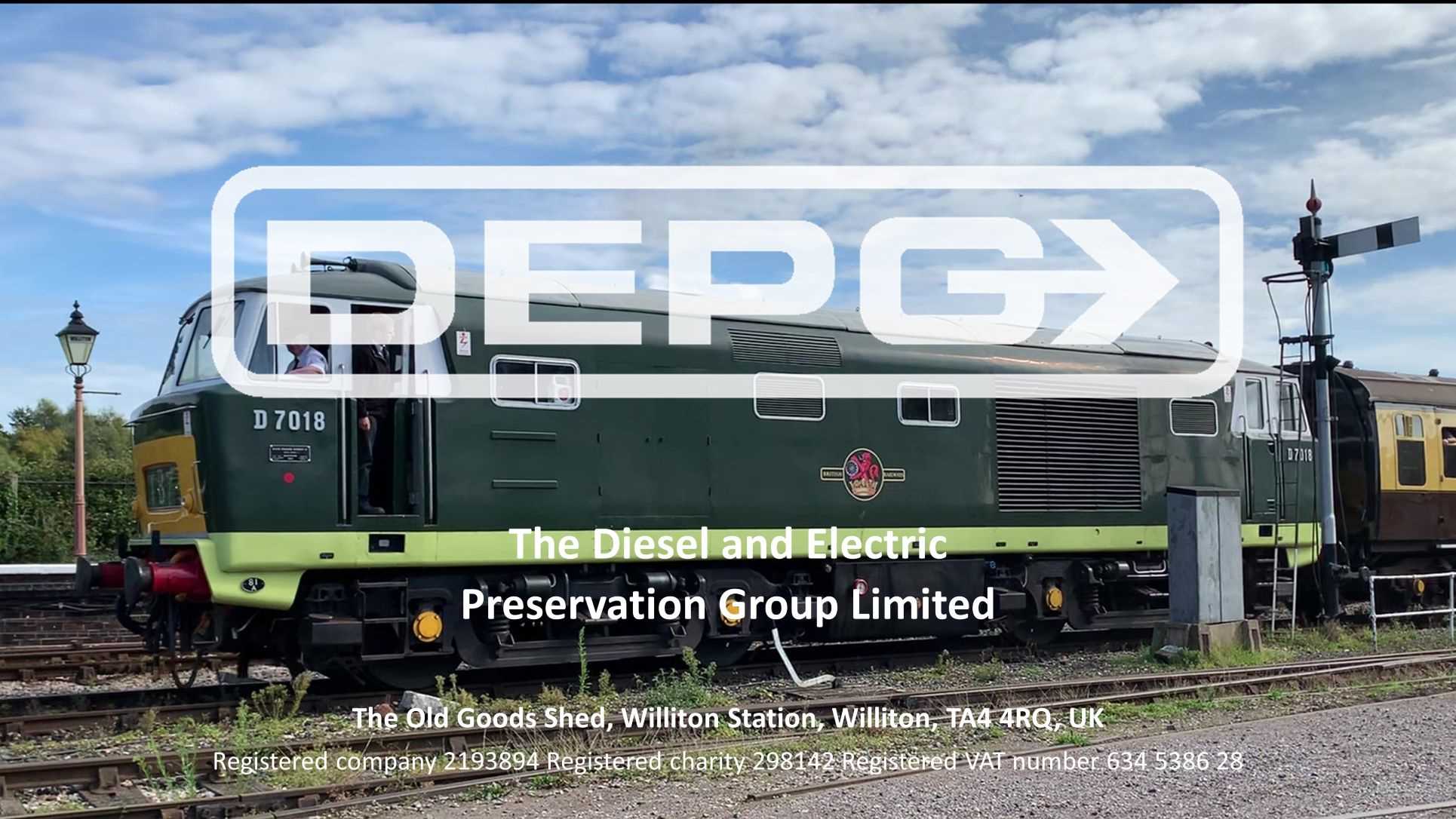 D7018 departing from Williton for Minehead on Saturday 24th September 2022. Click on the image to watch the video on the DEPG’s YouTube channel. Video by Andy Royal © CC BY-NC 3.0

As from Saturday 1st October, the railway enters the quieter ‘shoulder’ of the 2022 season and the RED timetable will come into effect, with services reduced from 4 to 3 trains each way per day. Two weekends in October are currently rostered for diesel haulage (8-9th and 15-16th), with Class 33 ‘Crompton’ D6575 (33 057) booked to cover the 12:30 Bishops Lydeard to Minehead and 14:30 return 40-mile duty. 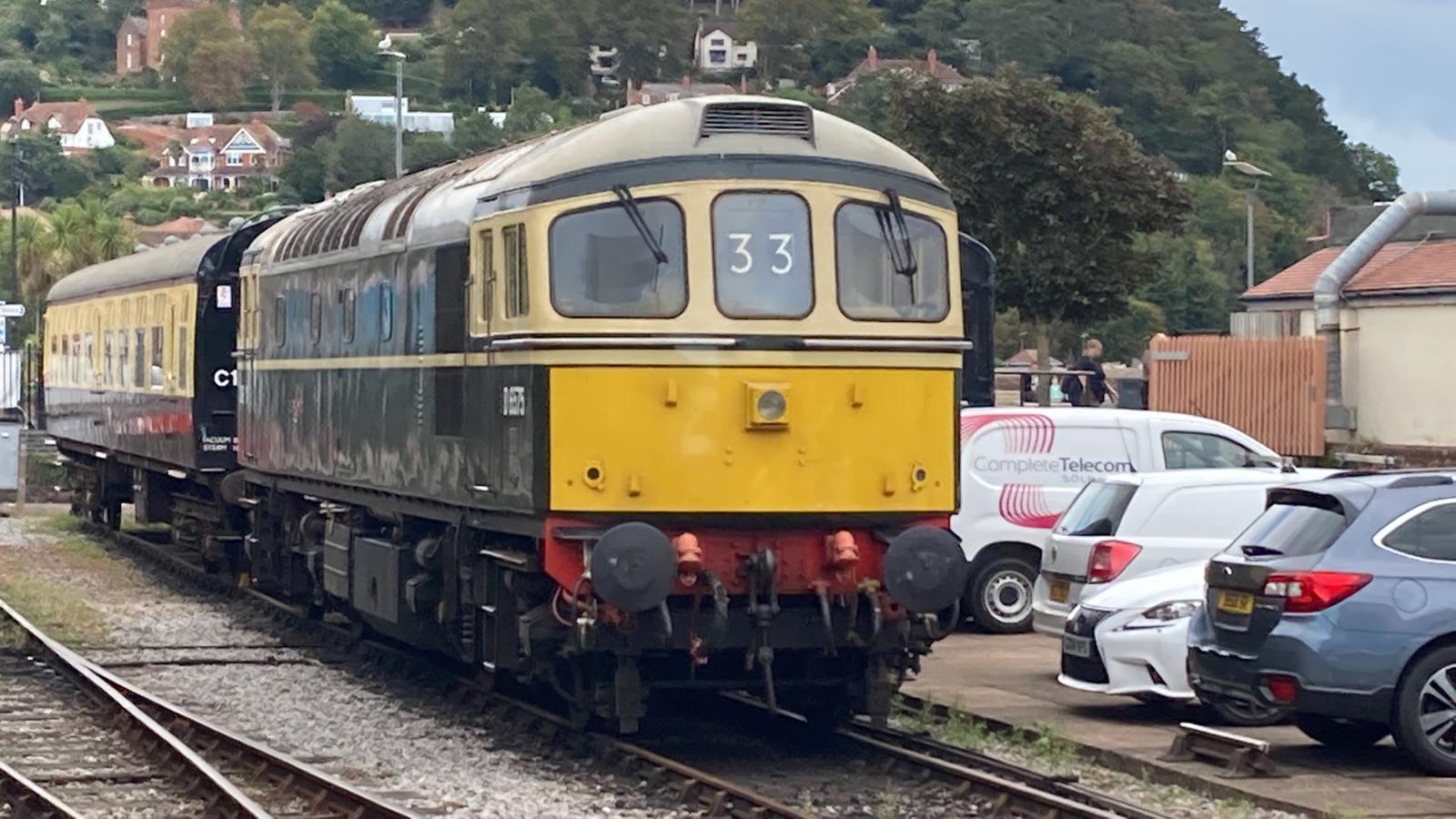 We have kept our DIESEL RUNNING DATES page updated throughout all of the timetable and traction changes that took place during the year and will keep this page available as a detailed record of public running for 2022. We will create a new page for 2023 as soon as timetables have been agreed and published.

MANY THANKS TO ALL WHO HAVE TRAVELLED for supporting this year’s DIESEL RUNNING program on the WSR.

The usual caveats of loco availability apply, but we aim to provide as much advance notice of any change as possible, using our DIESELGEN and Twitter feeds, so please sign up to keep up to date.

Class 52 D1010 ‘WESTERN CAMPAIGNER’ – this loco is set to be painted in her first coat of maroon during this week and we will be using gloss paint in case the loco has to spend some time outside during the winter. At present, D1010 occupies one of the two roads inside our loco shed at Williton, but if the covered space is needed for heavy maintenance on one of our other locos, D1010 will need to vacate to make space. In that eventuality, the use of gloss paint will give additional protection. In spring of 2023, the loco will be sanded down so that work can continue on the surface finish of the many patches that have been added during the last twelve months.

Please consider SPONSORING A PATCH because there is plenty of recently-added metal that still needs engraving. We engraved 30 patches last weekend and have another engraving session planned for this coming Saturday, after which we will be preparing the photographs and certificates of sponsorship to send out to all who have sponsored this phase of the restoration work. Click the image below and sponsor your patch now. Thank you in advance for your support ! 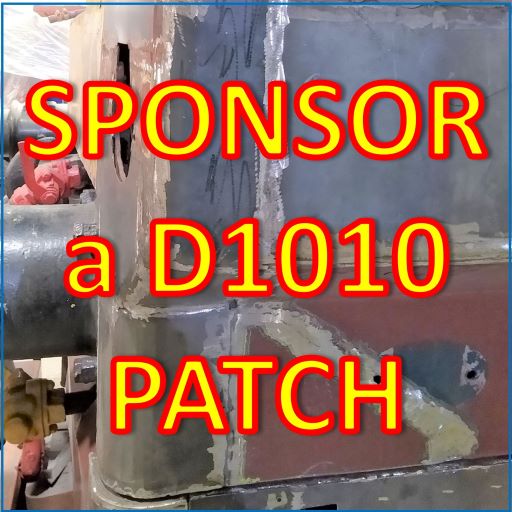 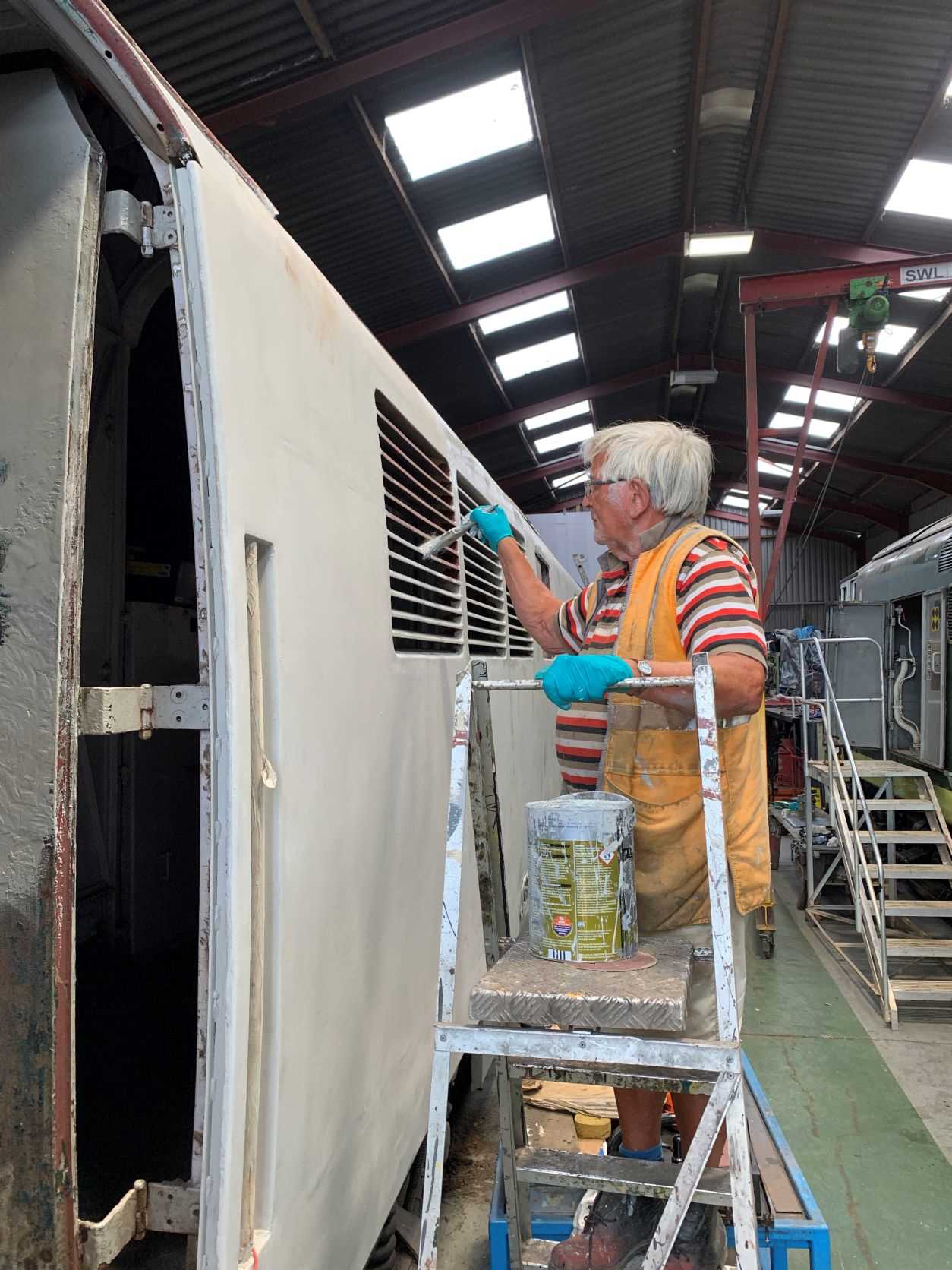 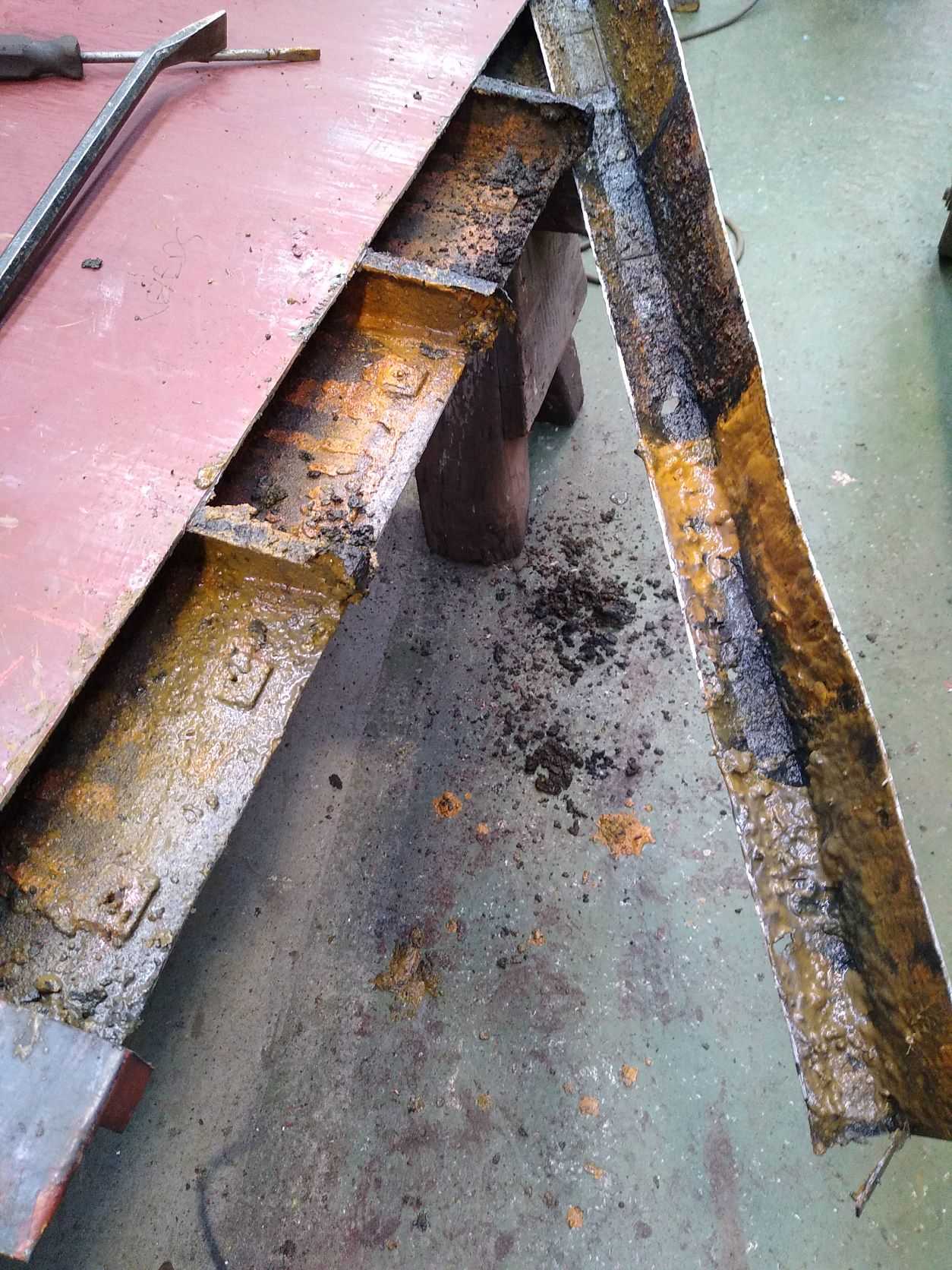 D1010 – the battery box door that was acting as a water tank was cut open for repairs to take place at Williton on Tuesday 20th September 2022. Photo by Colin Foxhall © CC BY-NC 3.0 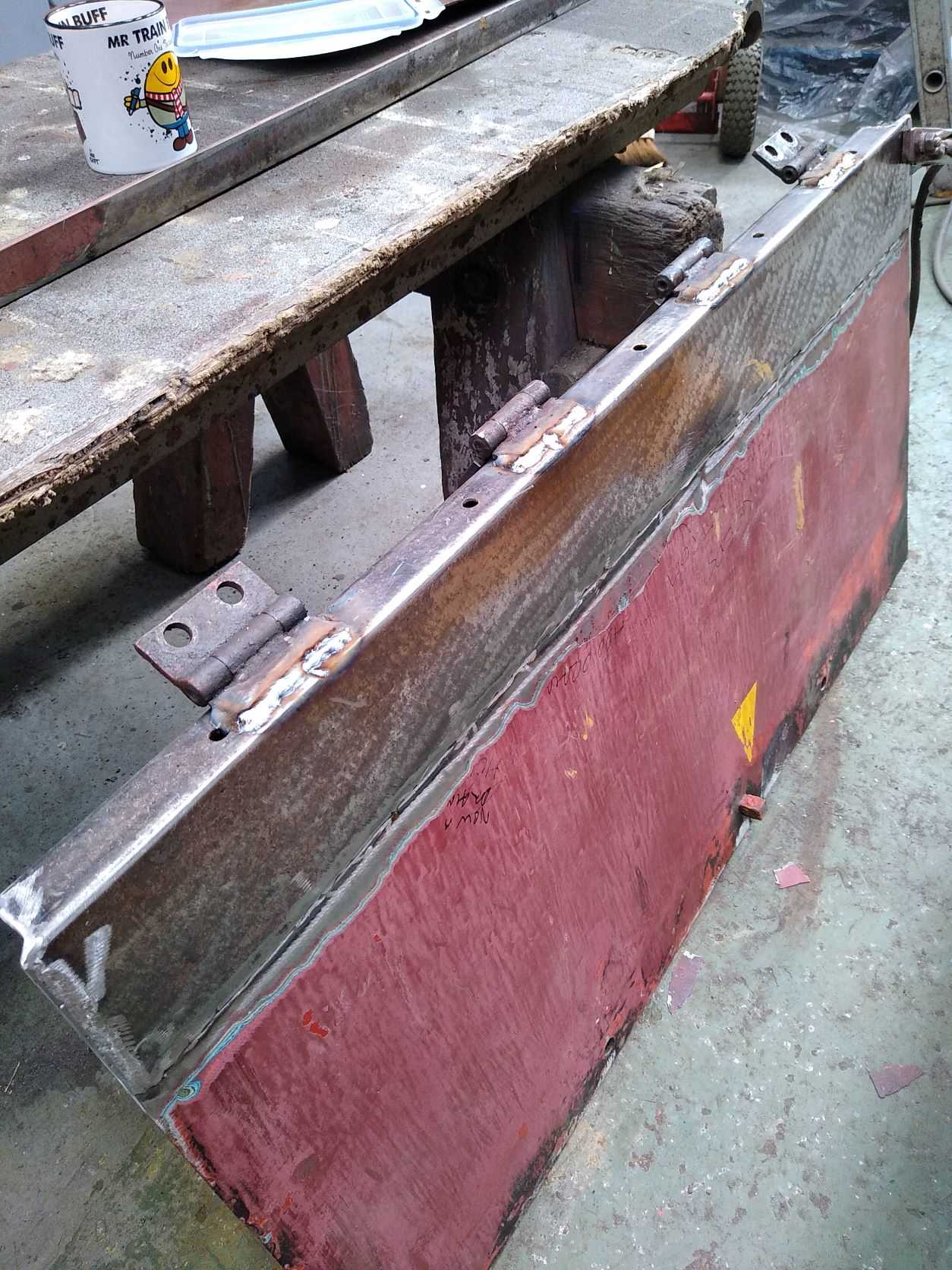 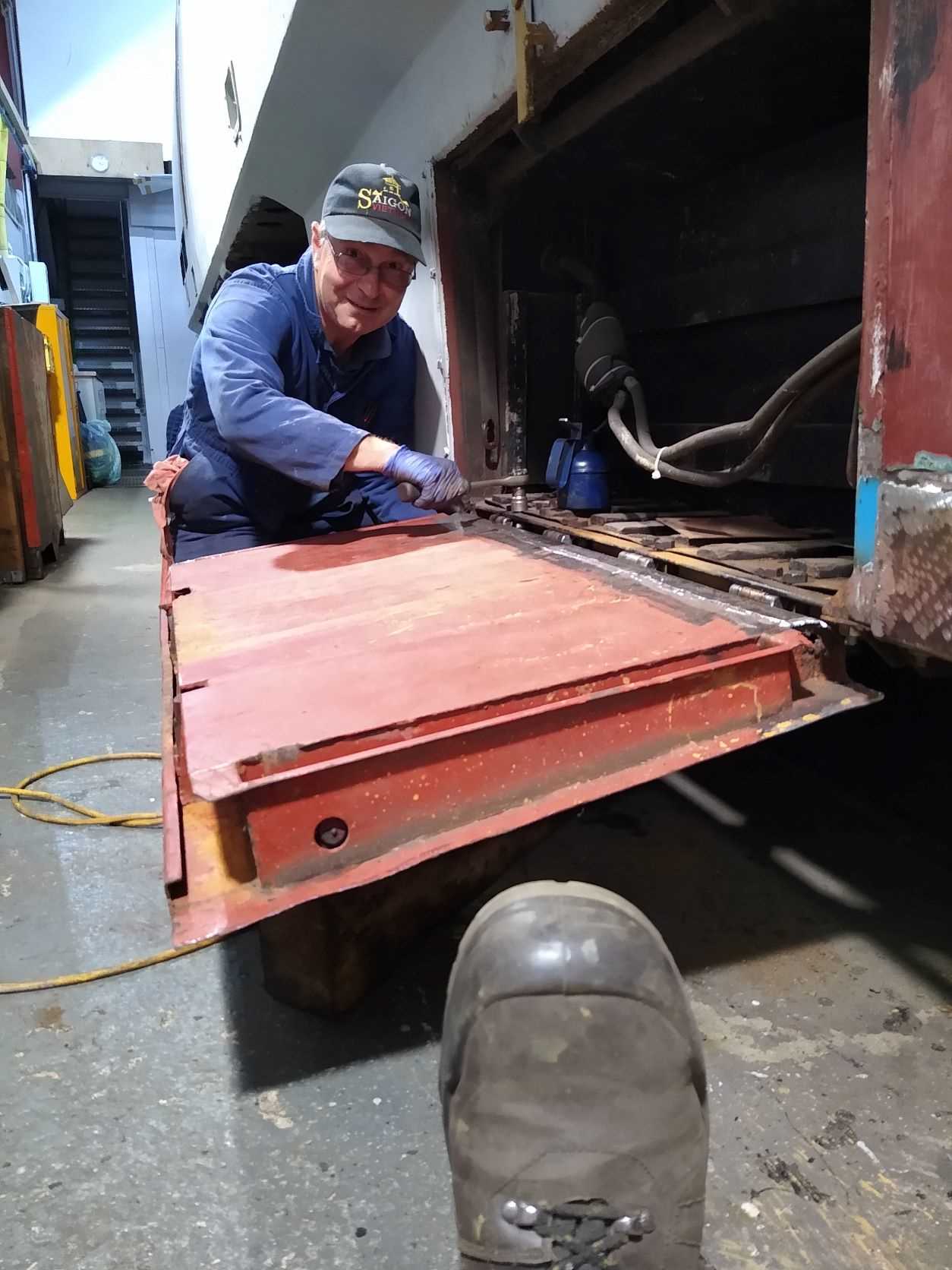 For the sum of £25, this scheme offers you a chance to sponsor the restoration of this much-loved locomotive, with your personal contribution being recorded and documented on a set of drawings that will be made available at our Williton depot on running days and open days. For those who prefer to remain anonymous, a unique reference number or code word of your choice will be engraved instead.

Class 33 D6566 (33 048) – this loco continues to get attention to various small tasks while waiting for her heat exchanger to return from contract repair, which is expected some time in mid-October.

Class 33 D6575 (33 057) – this loco is currently stabled at Minehead and being the WSR Duty Loco, is fully serviceable. She will move to Bishops Lydeard when convenient for the Operations Department, prior to taking up her remaining public service duties, as listed on our DIESEL RUNNING DATES page, which shows that she has been the busiest loco of our home fleet this year. Well done D6575 !

Class 35 ‘Hymek’ D7017 – we came very close to an engine start-up at Williton on Saturday 24th September but the pre-start checks revealed that the oil primer feed to one of the two turbochargers was not delivering oil as it should, so the start-up attempt was abandoned. The oil primer lines are being investigated. This careful precautionary work is essential to avoid a turbocharger bearing failure and subsequent damage. We expect to get this issue resolved and get the loco started up during ‘work week’ – which happens to be this week ! 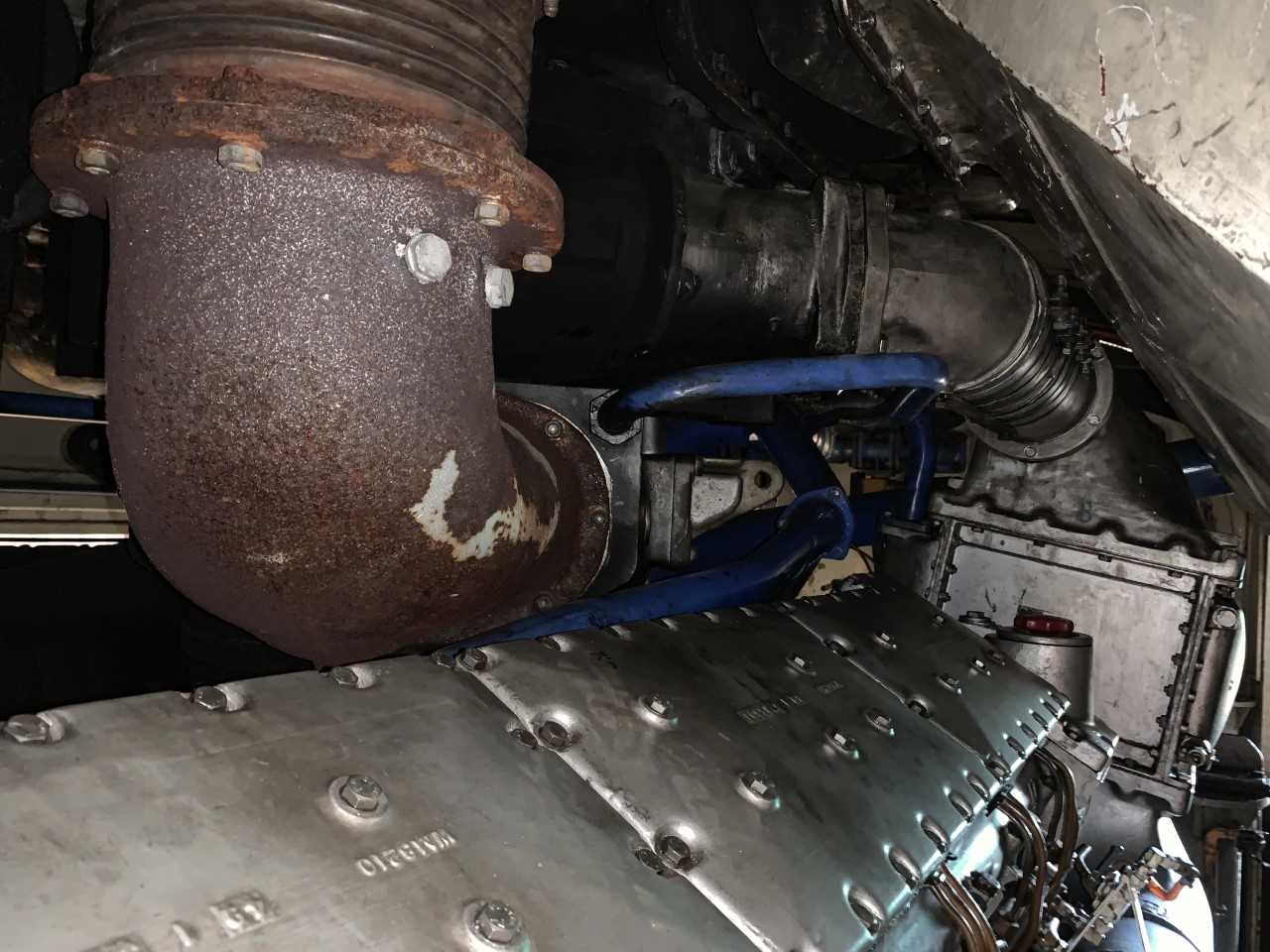 D7017 was prepared for start-up at Williton on Saturday 24th September 2022 but the oil primer for the turbocharger was found to be in need of a clean-out, so the start-up attempt was abandoned. The large rusty component in the photo is the exhaust outlet from the turbocharger. It is devoid of paint and rusts easily because it gets very hot ! Photo by Andy Royal © CC BY-NC 3.0

Class 35 ‘Hymek’ D7018 – this loco was in use on the 10:00 and 14:30 Minehead to Bishops Lydeard return services on Sat/Sun 24th/25th September and has now completed her public service duties for this season. The loco returned to Williton late on Sunday evening and work will now re-start on investigating the reason why the automatic gear change control system is not working as it should.

Class 14 ‘Teddy Bear’ D9518 – the re-installation of the many pipes and cables around the compressor and generator requires that the framework that forms the short nose end is in place, because the frames provide many of the attachment points. So, the Class 14 team have stepped up the work on these frames, as shown in the photographs below: 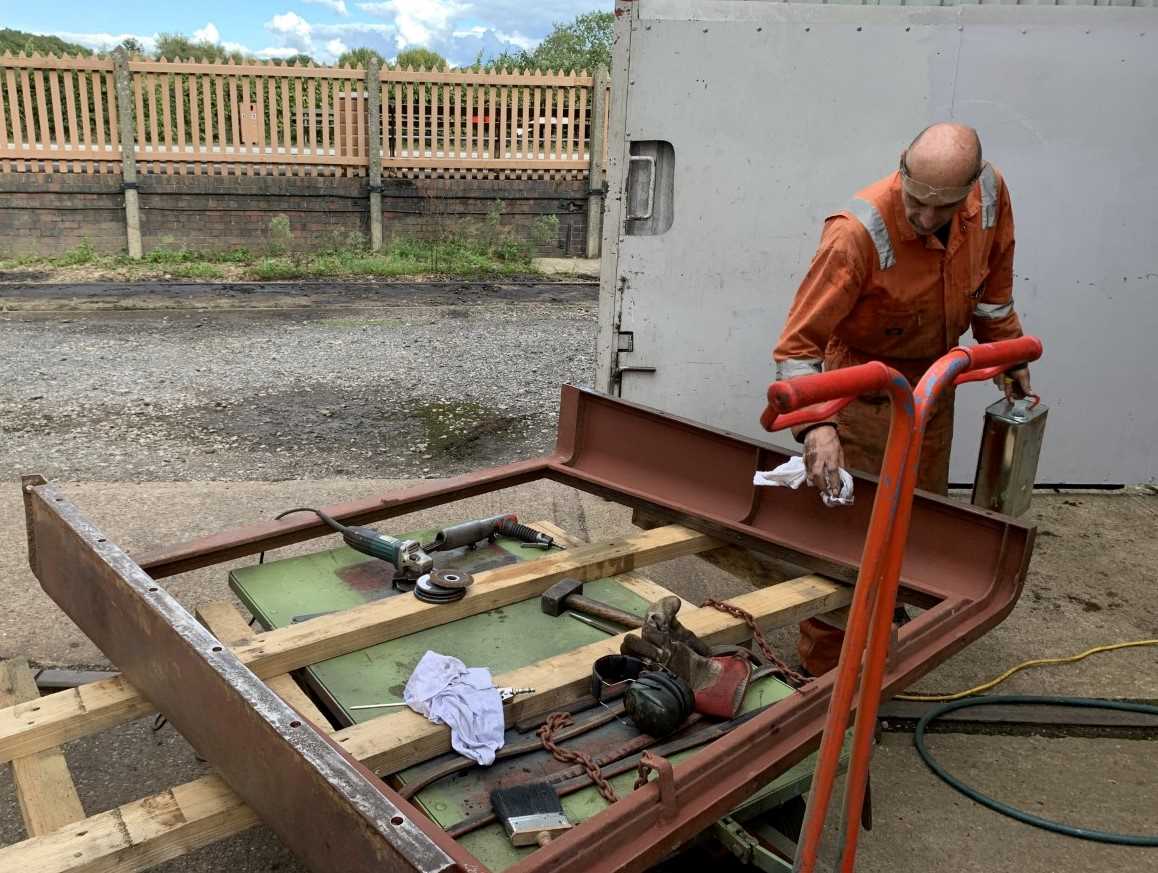 D9518 – the end frame for the short nose end underwent restoration at Williton on Saturday 24th September 2022 in the capable hands of Colin G. Photo by Andy Royal © CC BY-NC 3.0 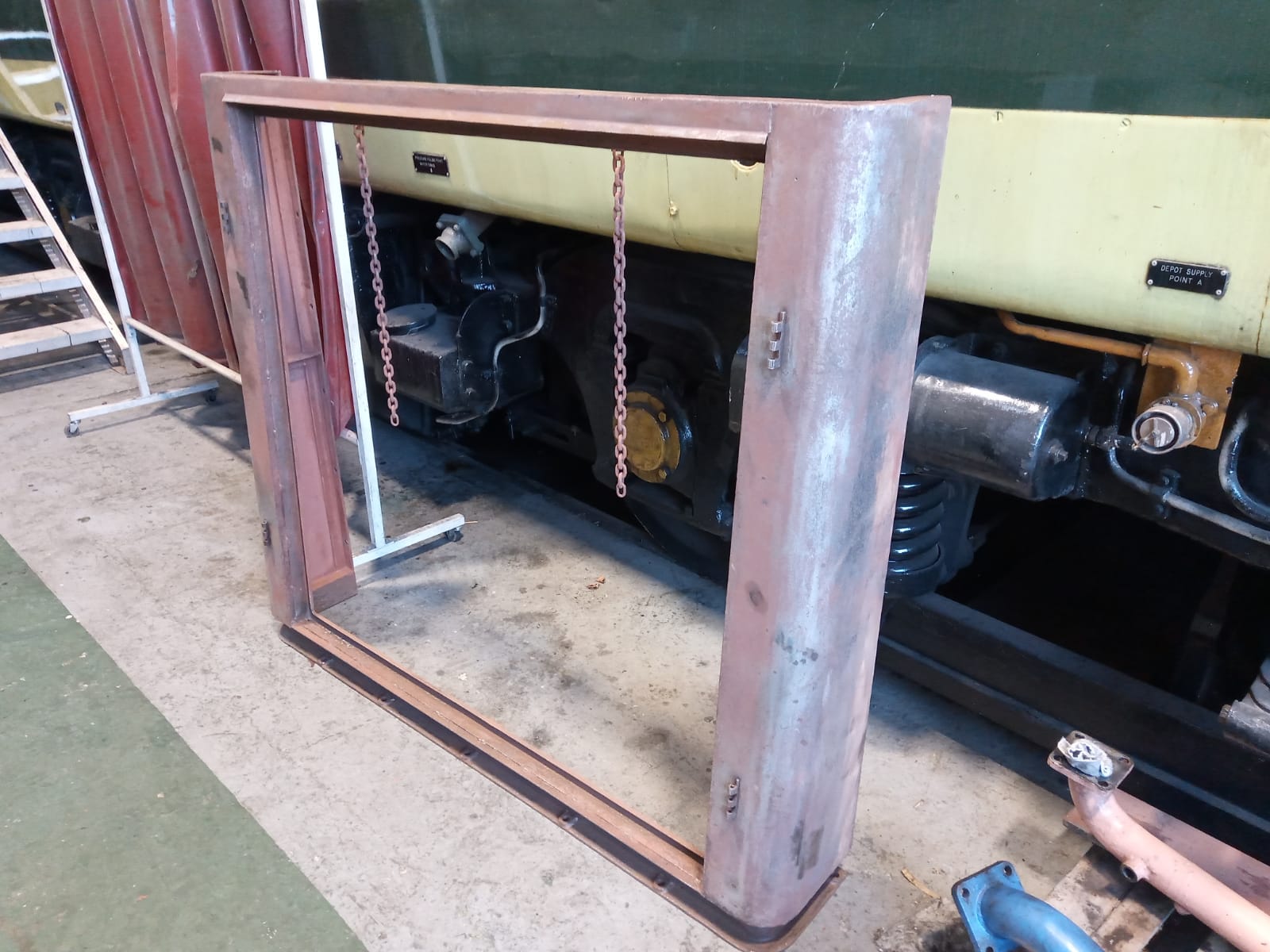 D9518 – the end frame for the short nose end restored and ready for painting at Williton on Saturday 24th September 2022. Photo by Colin Girle © CC BY-NC 3.0 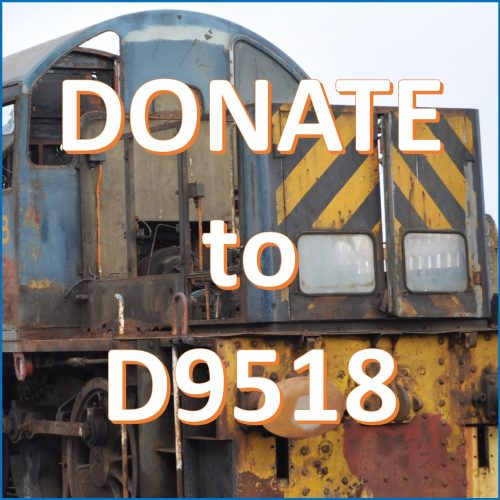 Class 14 ‘Teddy Bear’ D9526 – this loco continues to be in regular use on the Kent & East Sussex Railway working alongside the steam locos and the Diesel Multiple Unit (DMU), sharing the work of hauling the public services. Work on locally-based sister D9504 has progressed well, so we expect to see D9526 returning to Williton early in the New Year.

Class 47 47077 ‘NORTH STAR’ – this loco continues to be in regular use at the NYMR, although usage will reduce as autumn sets in. Last week, in the ‘ON SHED’ feature we included a photo of ‘NORTH STAR’ when she was still in mainline service, running as 47840. This photograph showed that the loco carried a ‘BRISTOL BLUEBIRDS’ headboard which prompted a question, and former DEPG Chairman Bob Tiller was quick to respond as follows:

“The Bristol Bluebirds headboard is used by GBRf train crew in Gloucester / Bristol.

At that time, 47840 ‘NORTH STAR’ was being used as a spare loco by First Great Western (FGW) and I was the FGW Fleet Engineer. The 47 was used to move empty stock and perform sleeper moves when a Class 57 was not available. We had other 47s, 830 and 832, but handed them back as more 57s came into service.

47840 would have had to go to conversion or sale or scrap, so as I was liaising with GBRf in my FGW role and also with Porterbrook, I decided along with assistance from Porterbrook management that 47840 should be saved as a ‘celebrity’ 47, a lot of us having a close affinity with this loco.

When the hire of 47840 ended with FGW, it went for 6 months to GBRf in effect with me, as I had left FGW and moved to GBRf as Fleet Engineer then as Engineering Director. The 47 was used both for stock moves and rail services.

Due to my friendship and the spirit of cooperation with both Brush Traction and Porterbrook, we were able to get some work done at Brush as they too realised that the preservation of 47840 was worthwhile and was their product. We therefore took 47840 off hire at GBRf and Train Manager Stu Priday and myself collected her from Old Oak Common going via Swindon, Golden Valley and Sheet Stores (Long Eaton, Derbyshire), light loco to Loughborough.

At Brush, they very kindly undertook a complete repaint in two tone green, rewired and refitted exhausters for dual braking along with all relevant pipework, fitted headcode blind boxes and wired all lighting. Brush also undertook some engine repairs and bogie work before we moved 47840 from Loughborough to Derby to haul its special train to Minehead and into preservation.”

Many thanks to Bob for providing us with this information ! 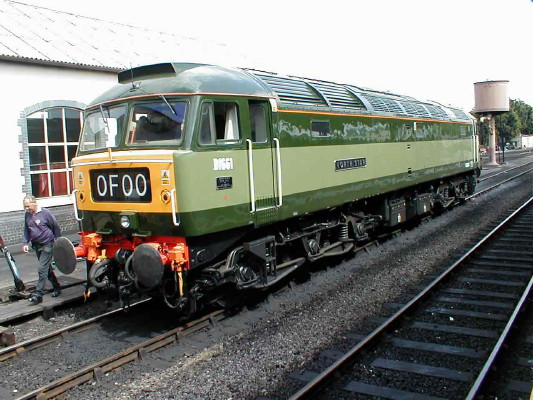 Andrew Barclay 0-4-0DH 578 – after receiving diagonal stripes on her leading buffer beam, this little loco now awaits similar attention to he trailing buffer beam and also the restoration of cabside lettering. We hope to make further progress on this work during October.