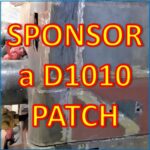 D1010 is the pride of the fleet at Williton, a beast of a locomotive powered by two Maybach MD655 engines. The loco was stored outside Merehead quarry for a number of years before being preserved by The D&EPG, firstly at Didcot and then moving to Williton. Today the loco has a dedicated team of hardy volunteers who maintain the loco with a view to keeping her in good working order.

The ‘Westerns’ were the Western Region’s diesel hydraulic flagship. Designed for express passenger work, they were equally at home on heavy freight. D1010 is one of 74 locos built from 1961 to 1963. All locos were named, each name beginning with the word ‘Western’.

Built at Swindon and Crewe works, the ‘Westerns’ first appeared on the scene in late 1961. They were the last of the Diesel Hydraulic classes to be withdrawn from service, after being classified as non-standard. The last four examples (including D1010) disappeared from service in February 1977. Such was their popularity with enthusiasts, seven locos of the 74 built were saved for preservation and one of these, D1015 ‘WESTERN CHAMPION’ has been mainline certified.

D1010 is currently undergoing a bodywork and transmission overhaul, after which she will be returned to service wearing her original livery of BR maroon with yellow bufferbeam.

Support D1010 via the CAMPAIGN for CAMPAIGNER by clicking this link or clicking the image below:

Go to the Loco timeline page

Go to the Locomotive Status page

Back to the Home page