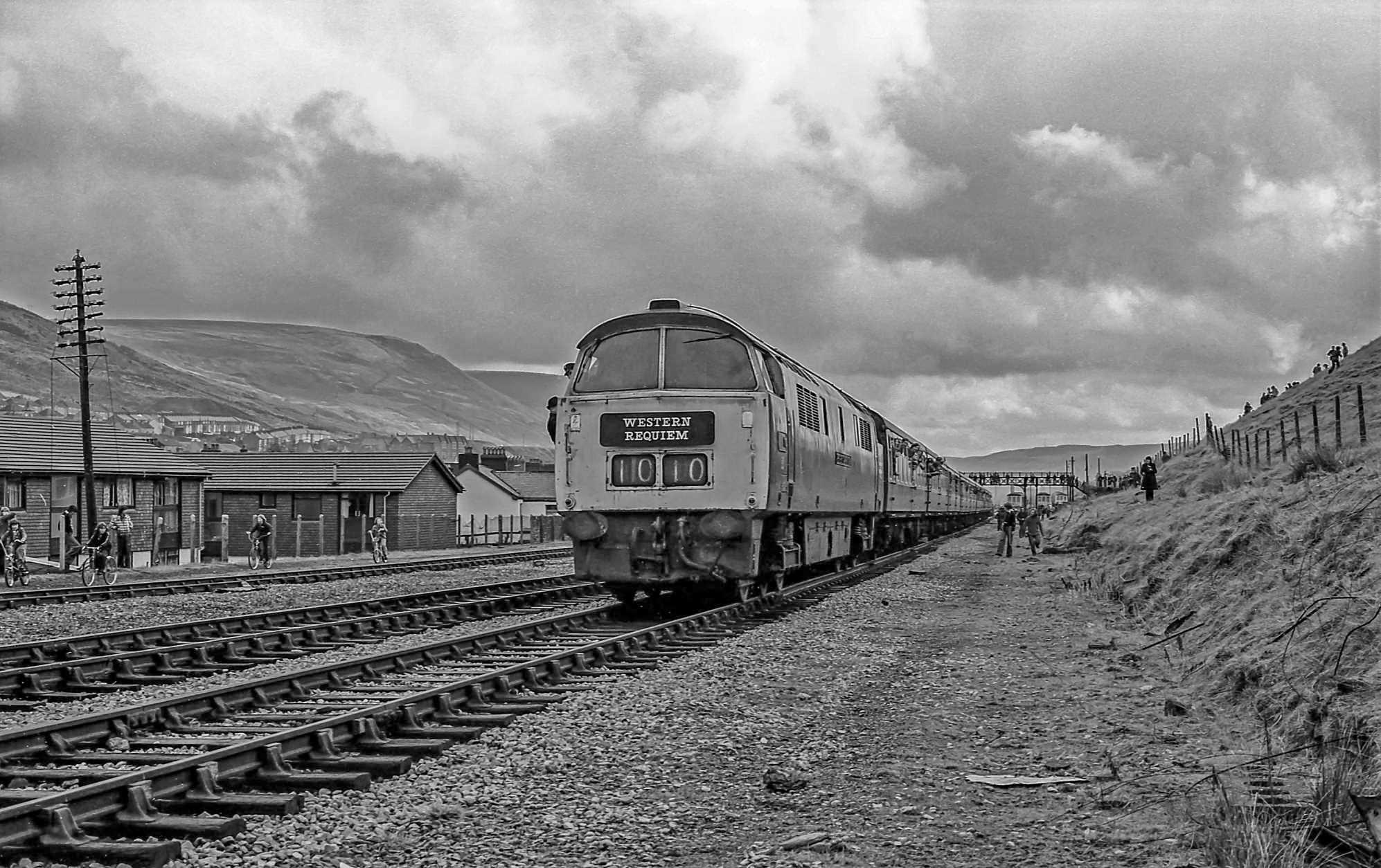 D1010 ‘WESTERN CAMPAIGNER’ brings her train to a stand on the headshunt at Treherbert in the Rhondda Valley to uncouple and run around the RPPR “WESTERN REQUIEM RELIEF” railtour before retracing her steps to Pontypridd and then onwards to Merthyr Tydfil and later, Aberdare before returning to Paddington via Gloucester on Sunday the 13th of February 1977. Photo by Kelvin Lumb © CC BY-NC 3.0

45 years ago today, our D1010 ‘WESTERN CAMPAIGNER’ hauled one of the last railtours of the diesel-hydraulic era when she hauled the 1Z08 ‘WESTERN REQUIEM RELIEF’ railtour from Paddington to the heads of the valleys of South Wales. The tour was the ‘relief’ because the ‘proper’ railtour was scheduled for the following Sunday but was so heavily overbooked that the organisers, the ‘Railway Pictorial Publications Railtour’ (RPPR) arranged for the ‘relief’ to run via the same route, exactly one week prior to the main tour. 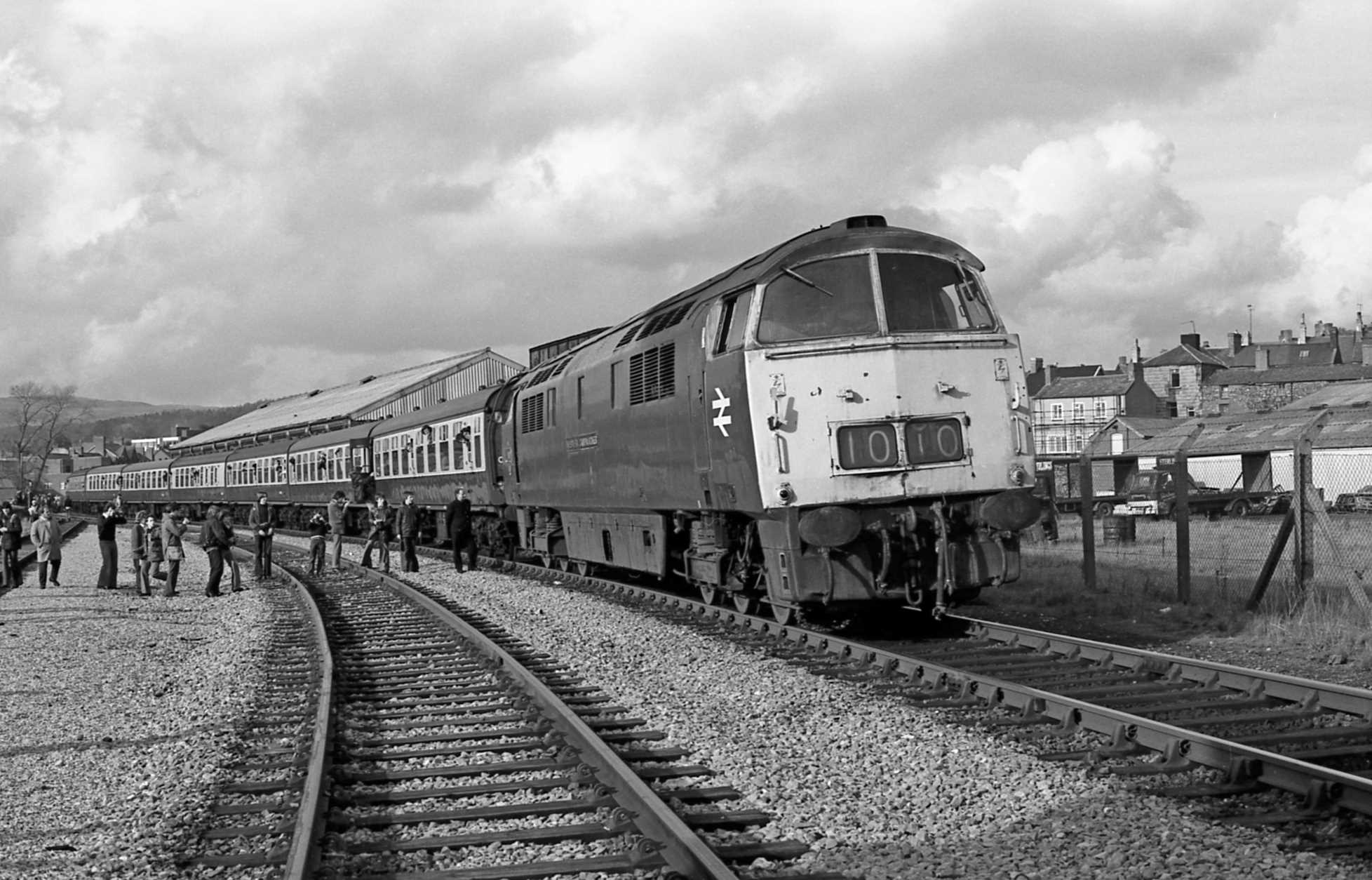 D1010 ‘WESTERN CAMPAIGNER’ backs on to her train in preparation to depart from Merthyr Tydfil with the RPPR “WESTERN REQUIEM RELIEF” railtour, retracing her steps to Pontypridd and then to Cardiff for a one-hour stopover before heading for Paddington via Gloucester on the afternoon of Sunday the 13th of February 1977. Photo by Kelvin Lumb © CC BY-NC 3.0

The story of that most wonderful day out behind one of the last ‘Westerns’ still in service in that twilight period was told by Neale Long in our booklet ‘D1010 – FROM MEREHEAD to MINEHEAD’, available from our online store. The tour started at Paddington and routed via Stroud, Gloucester and Chepstow to Pontypridd and onward to three valley lines in turn. The return to Paddington was intended to be via the Severn Tunnel but had to be diverted via Gloucester because of a signalling fault in the tunnel, so D1010 turned up the power to recover some of the lost time and performed admirably throughout. The following week’s run of the railtour ‘proper’ was not quite so fortuitous …. but that’s a story for next week.

VERY IMPORTANT DATES FOR YOUR DIARY – the WSR’s 2022 DIESEL GALA will take place from Thursday 9th through Saturday 11th June 2022, so keep these dates free and make a plan to attend ! Click this link to the WSR website to view the dates for other WSR events that are planned for 2022.

Class 52 D1010 ‘WESTERN CAMPAIGNER’ – there is more more progress to report on this loco as welding work draws towards a close at ‘B’ end, and preparations shift to the bodyside and the ‘A’ end. Behind the welding work comes the sanding and priming, then more sanding and filling, then more sanding, so a ‘Class M’ industrial dust extractor has been purchased for use with a power sander, to ensure that our volunteers (and everything else in the shed) remains free from dust. First indications were that this setup worked very well on Saturday 12th February, which is very important because there is an awful lot of sanding to be done ! 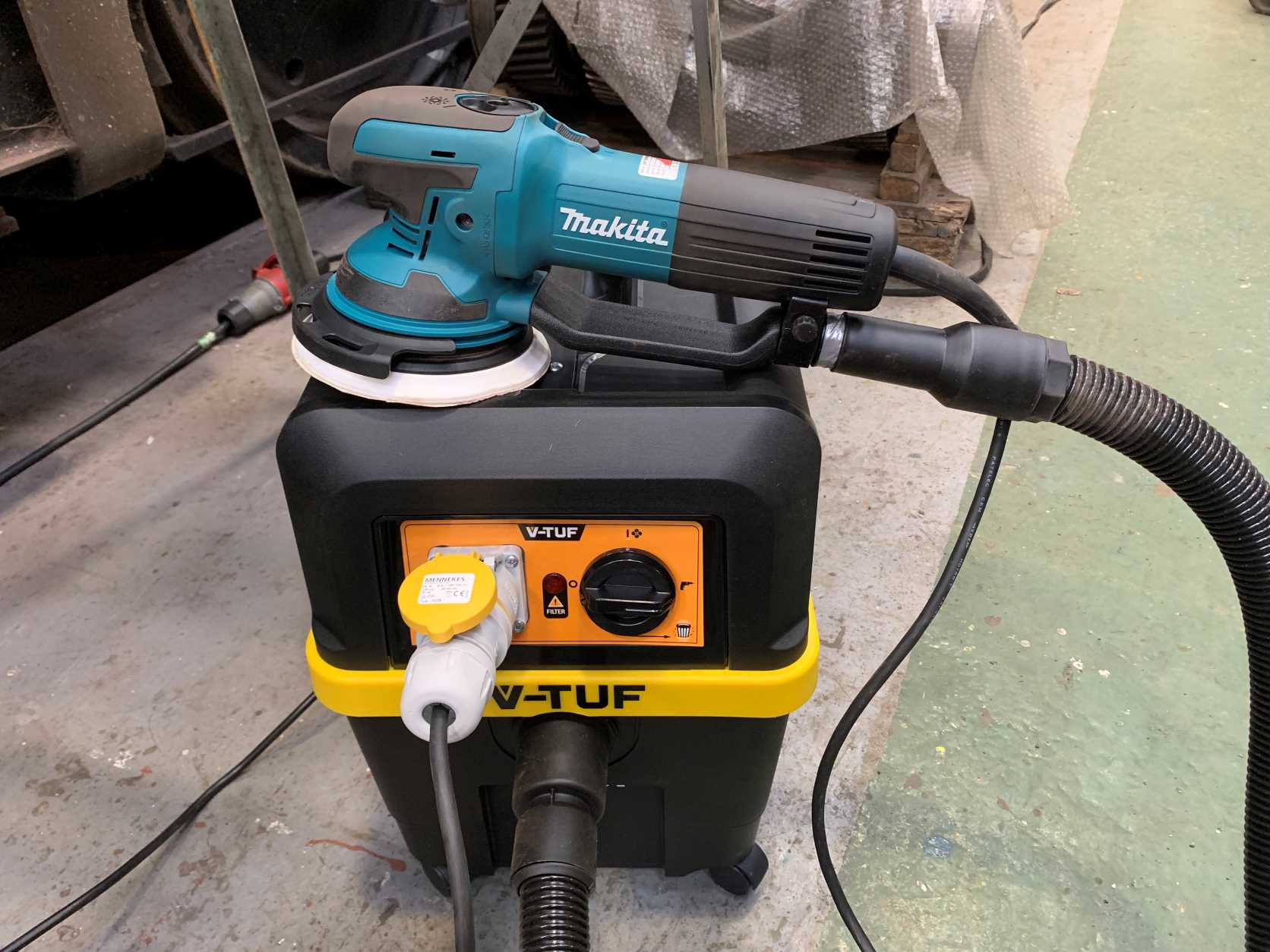 The management of fine dust is very important from a health perspective as well as for keeping the workplace clean and safe. This combination of a 150mm (6″) power sander and a ‘Class M’ industrial dust extractor ensures that the dust remains inside the machine. Paid for by donations to the D1010 Restoration Appeal and pictured at Williton on 12th February 2022 by Andy Royal © CC BY-NC 3.0

Here’s some photos of the most recent progress on this locomotive: 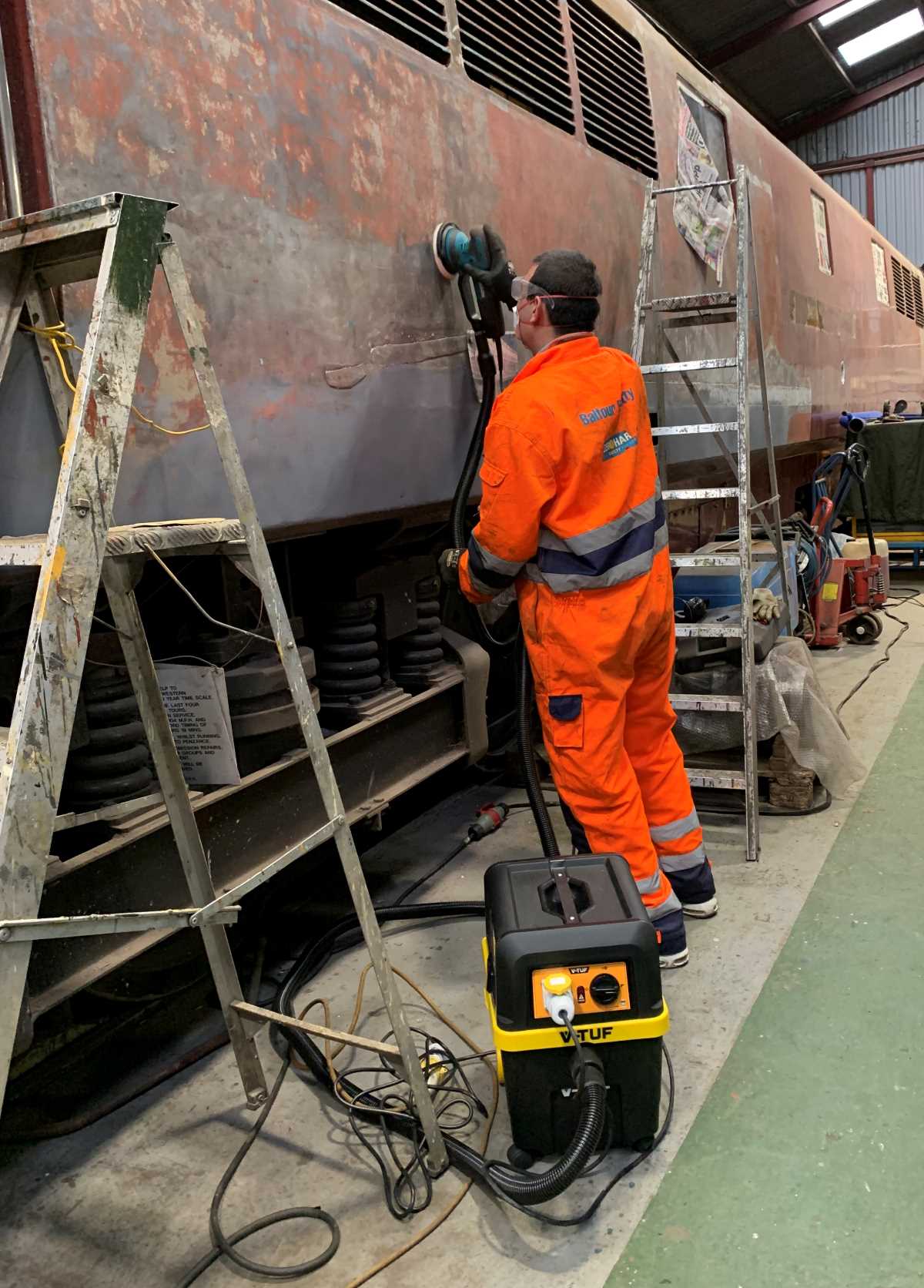 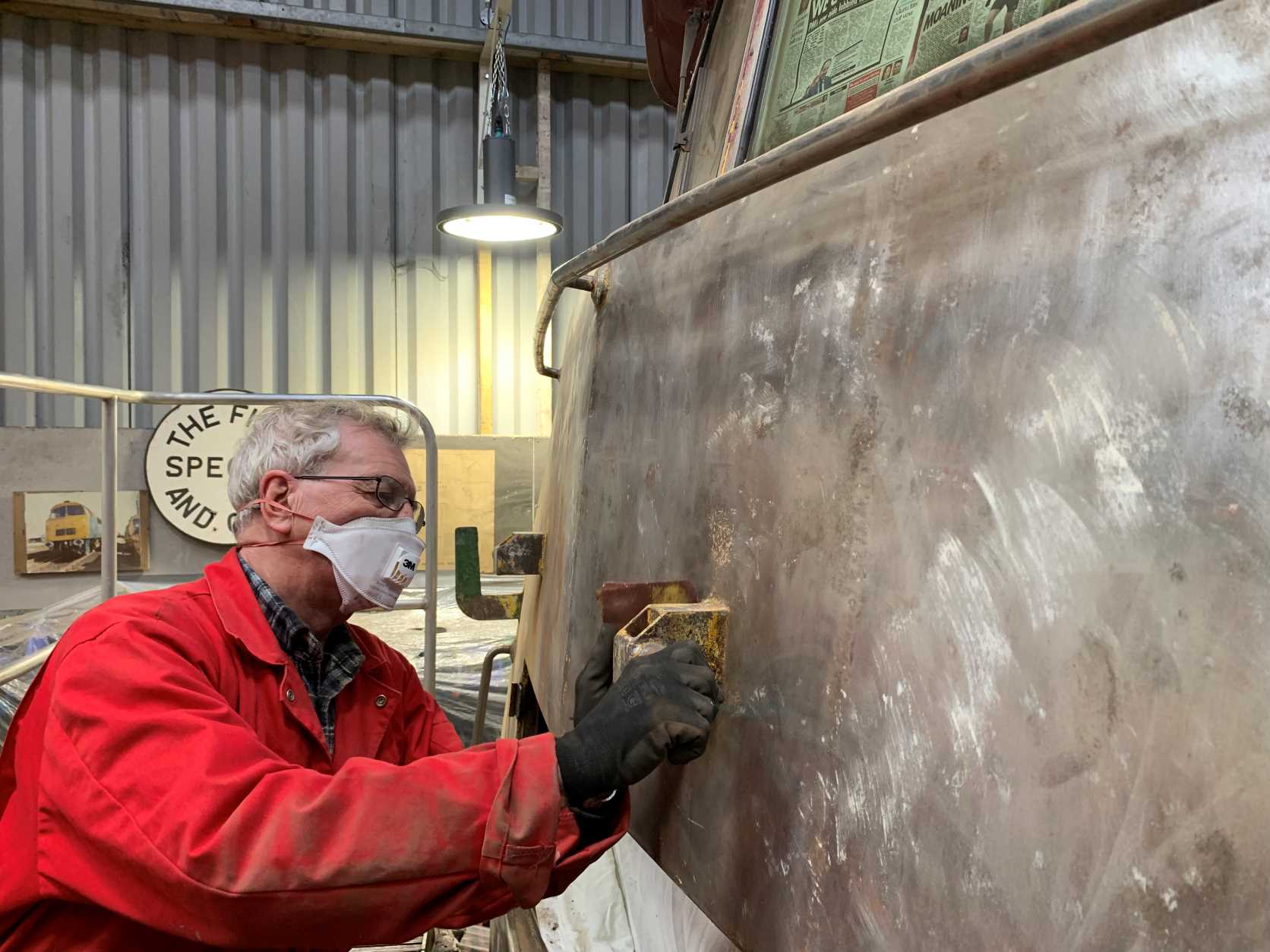 D1010 – at the ‘B’ end, Ian F was hard at work with the sanding block, attending to the details, in this case making sure that the headboard brackets were cleaned up and ready for painting. Pictured at Williton on Saturday 12th February 2022 by Andy Royal © CC BY-NC 3.0 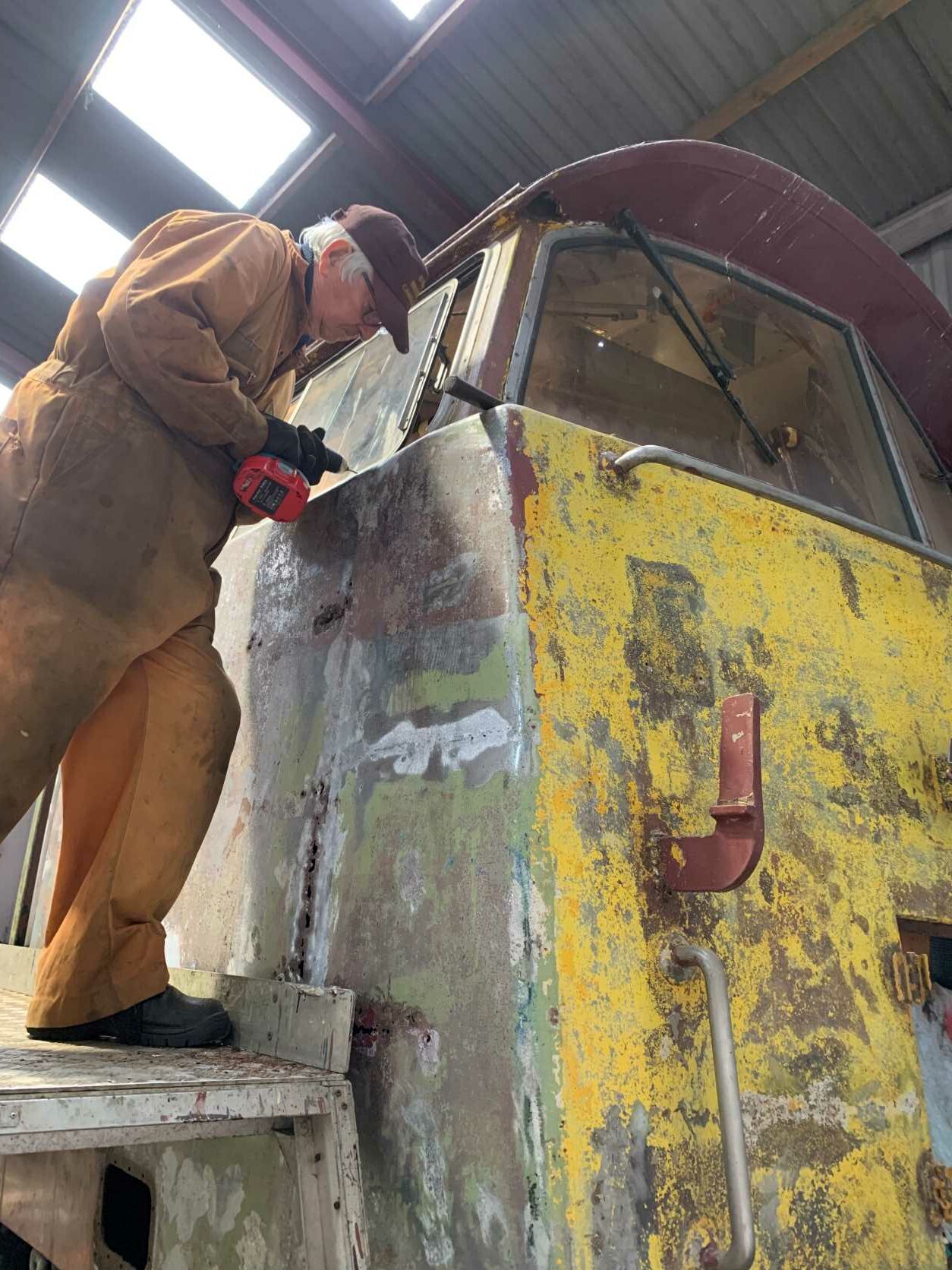 D1010 – at the ‘A’ end, Gordon made a start on the removal of the side windows, to allow welding work to take place around the window frames. The level of corrosion at ‘A’ end is generally more severe than at ‘B’ end, not helped by the fact that this loco had to endure three collision damage repairs at ‘A’ end during her 15-year life in mainline service. See our loco timeline page. Pictured at Williton on Saturday 12th February 2022 by Andy Royal © CC BY-NC 3.0 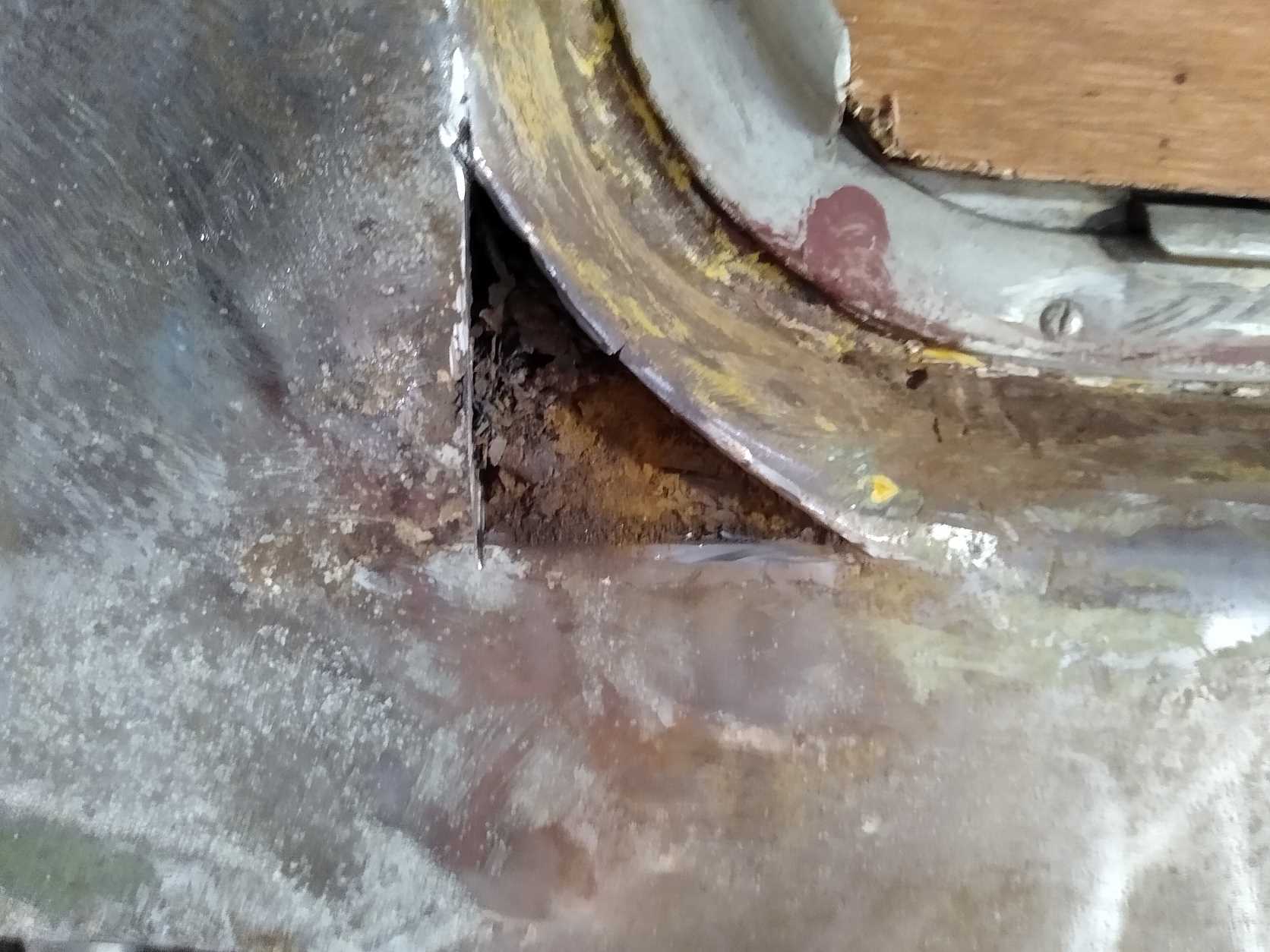 D1010 – back at the ‘B’ end on the secondman side, an investigation into a suspected area of corrosion revealed a collection of rusty debris that has built up and resulted in perforation of the skin. This area will be cleaned out and new metal will be welded in. Pictured at Williton on Monday 7th February 2022 by Colin Foxhall © CC BY-NC 3.0 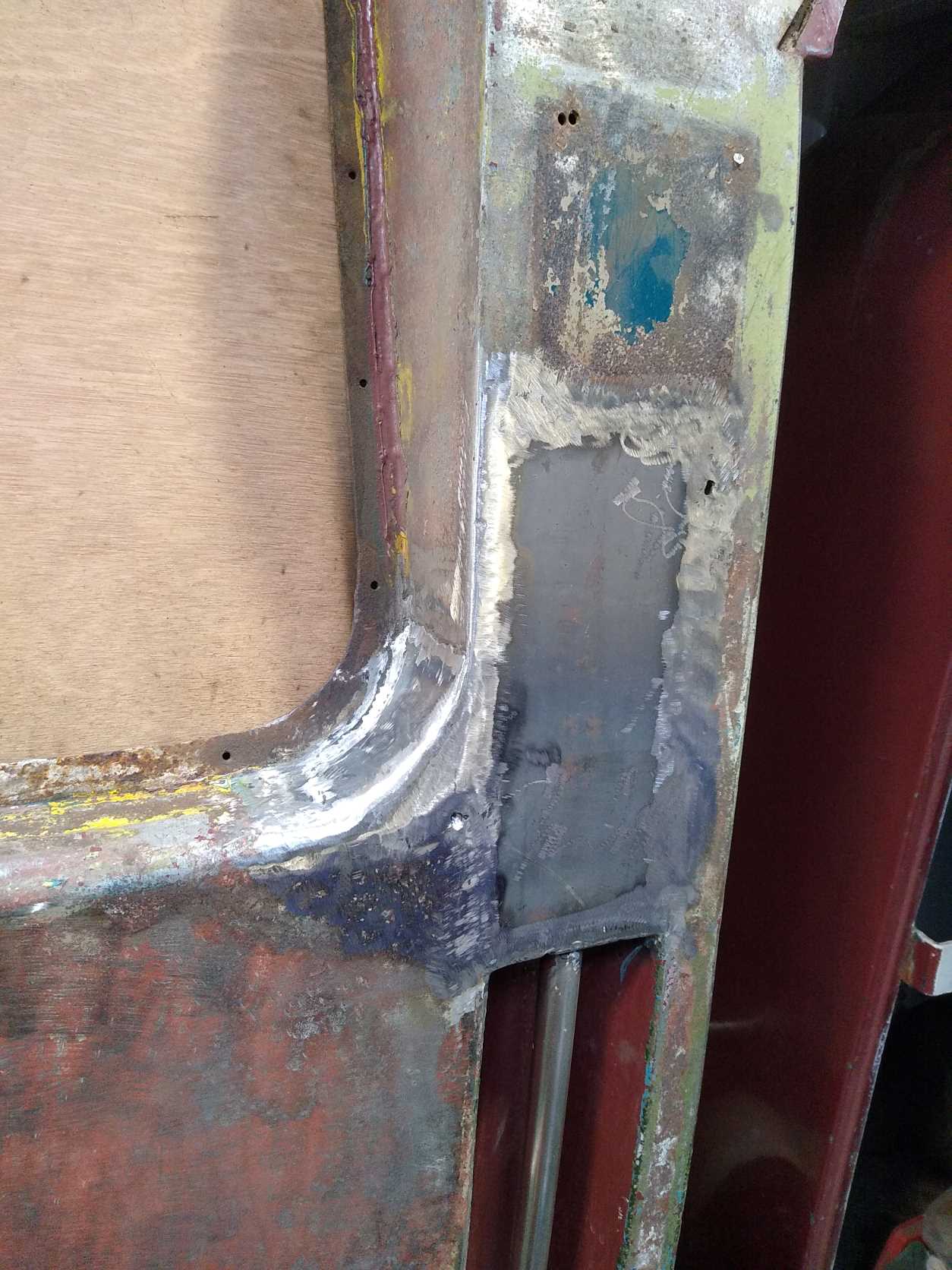 D1010 – at the ‘B’ end on the driver side, a similar repair has already been completed. The repairs at this end of the loco are drawing to a close, with only the horn mounting box in the roof of the cab to be dealt with. Pictured at Williton on Monday 7th February 2022 by Colin Foxhall © CC BY-NC 3.0 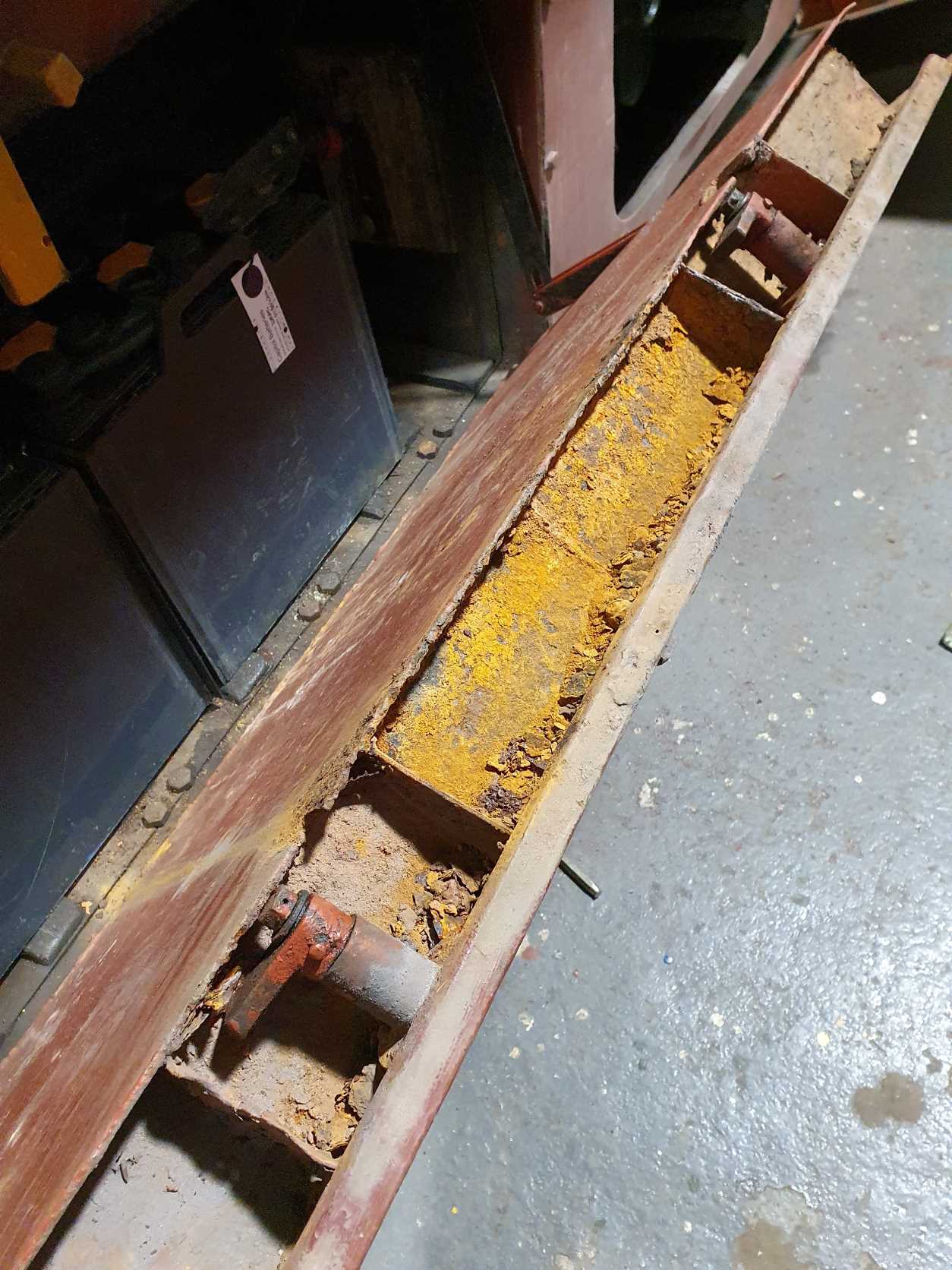 D1010 – Brian (our most recent recruit to the D1010 restoration effort) made a start on the battery compartment doors, of which there are eight in total. The design allows water to pool in the recesses on top of the door, which then slowly rots the metal until the water can seep inside the door and rot the bottom of the door instead. Pictured at Williton on Saturday 12th February 2022 by Brian Litherland © CC BY-NC 3.0 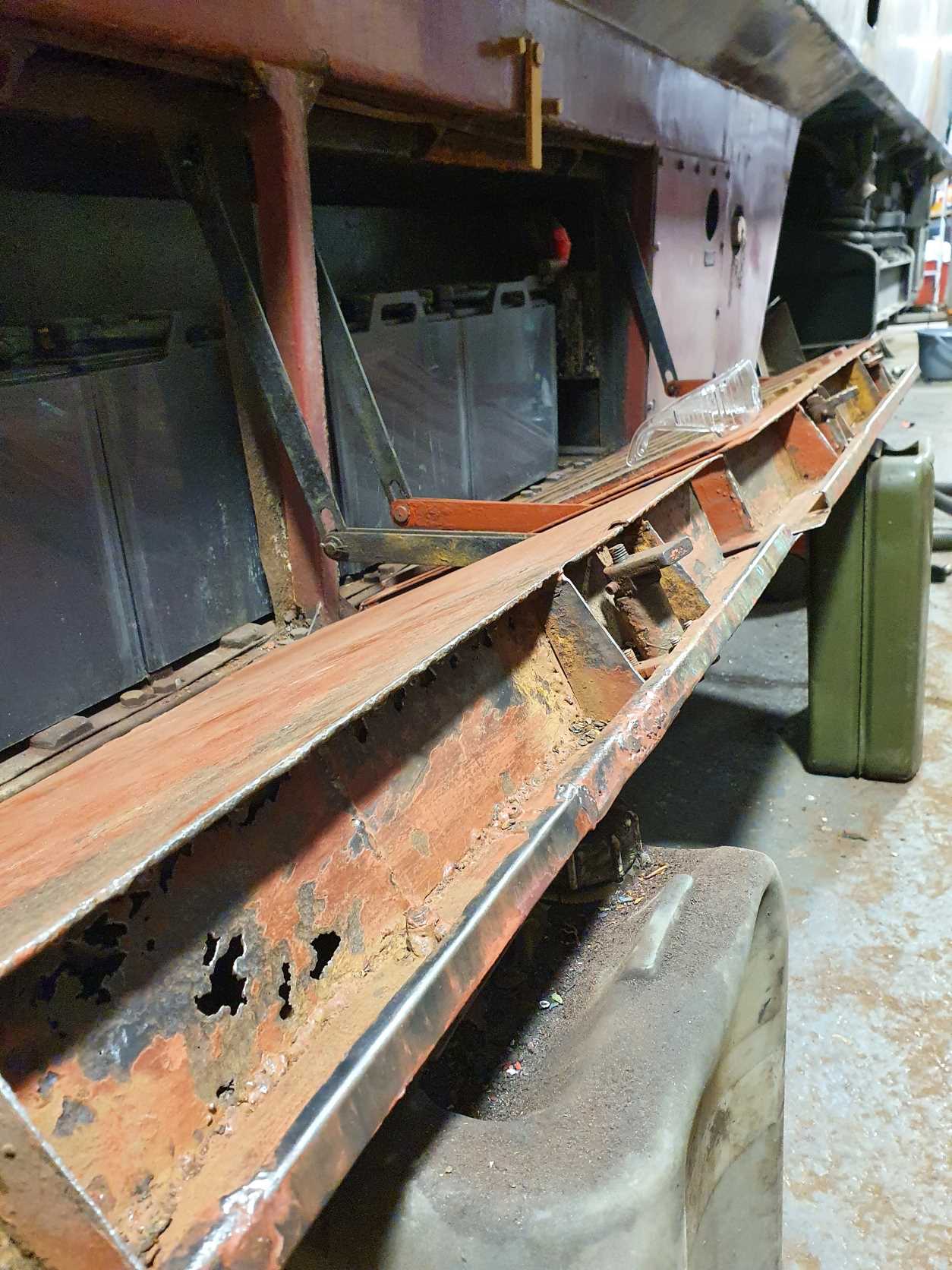 D1010 – the perforated metal has allowed water to enter the inside of the door, which has also rotted at the bottom as a result. The door will need to be removed from the loco and repaired on the bench. Pictured at Williton on Saturday 12th February 2022 by Brian Litherland © CC BY-NC 3.0

Class 33 D6566 (33 048) – after completion of the brake block change and slack adjuster change, this loco was started up on Saturday 12th February to keep the engine and batteries in good condition and to perform a preliminary brake test.

Class 33 D6575 (33 057) – this loco was also started up on Saturday 12th February after DEPG volunteer loco manager Ian R had performed an ‘A’ exam (required after every 50 hours of operation).

Class 33 ‘Crompton’ D6575 (33 057) was started up at Westridge Shed, Bishops Lydeard following an ‘A’ exam on Saturday 12th February 2022. The blue smoke is because the engine was started from cold. The exhaust cleaned up later, as the engine warmed up. Photo by Tom Courtney © CC BY-NC 3.0

Class 14 ‘Teddy Bear’ D9518 – more progress was made on the overhaul of the buffers, which was heavy work involving the drilling-out of bolts that had seized in the 57 years since they were first installed on the locomotive. One pair of buffers has now been fully disassembled and is ready for cleaning and inspection before reassembly and re-fitting to the frames. 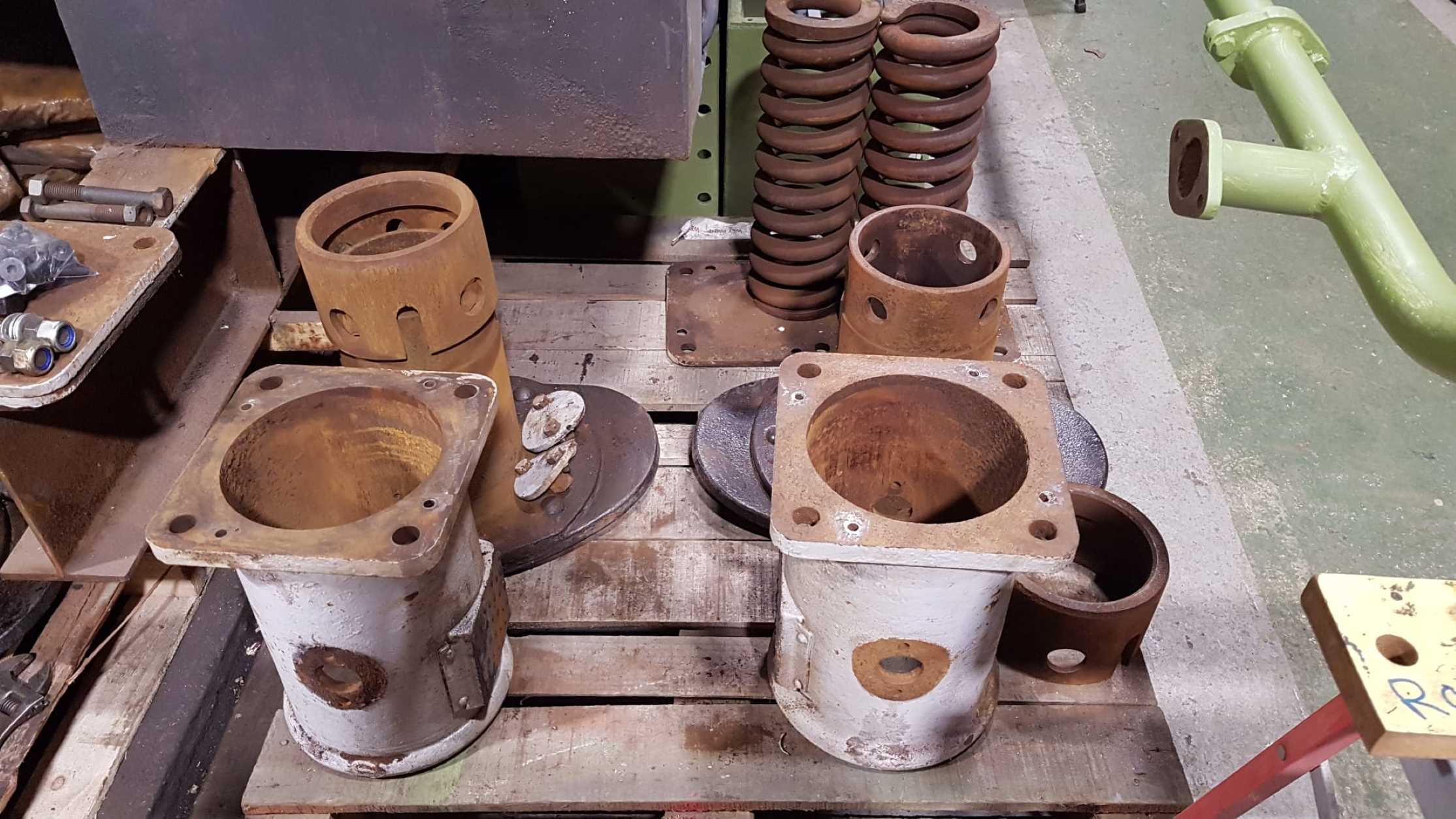 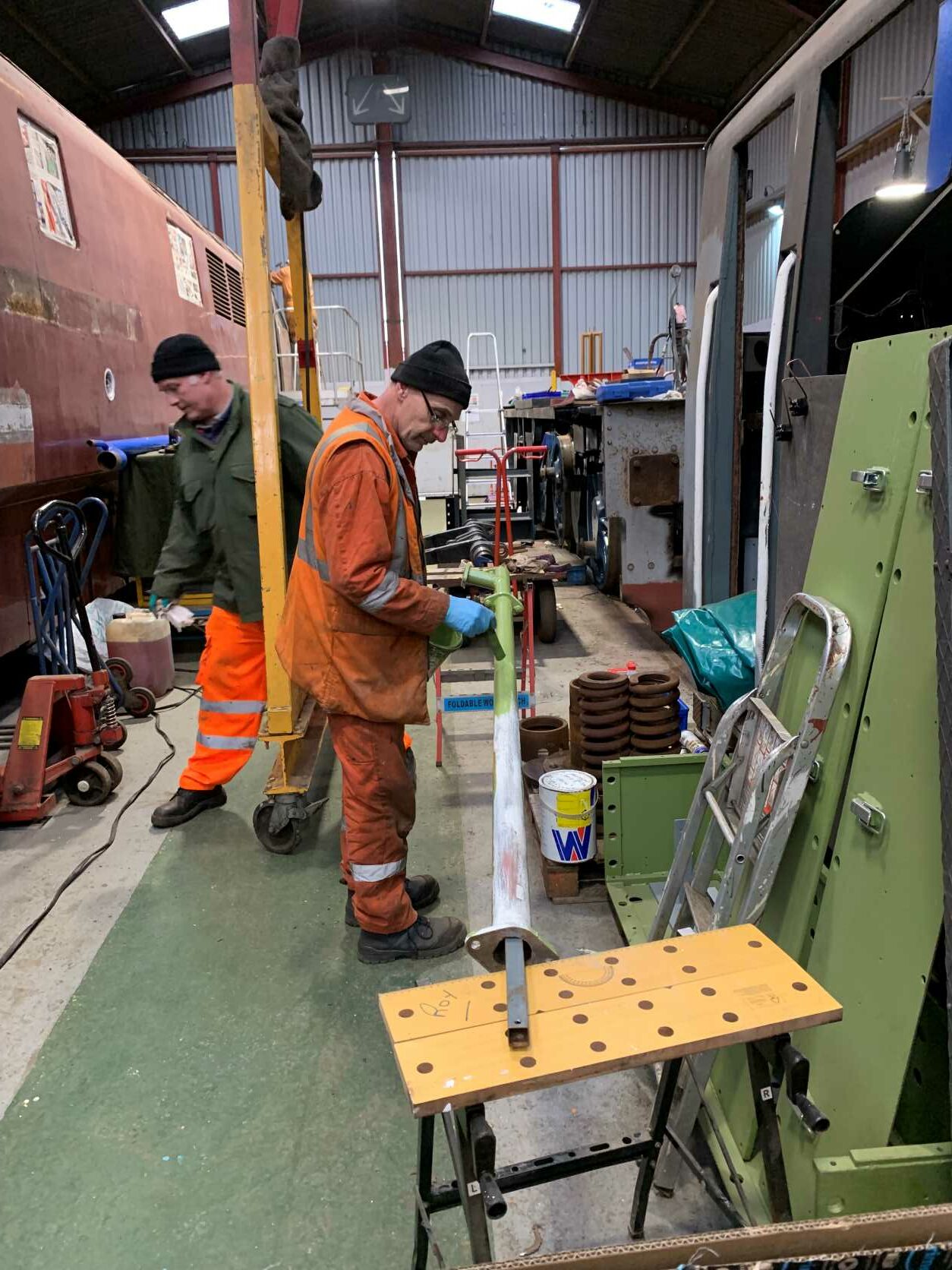 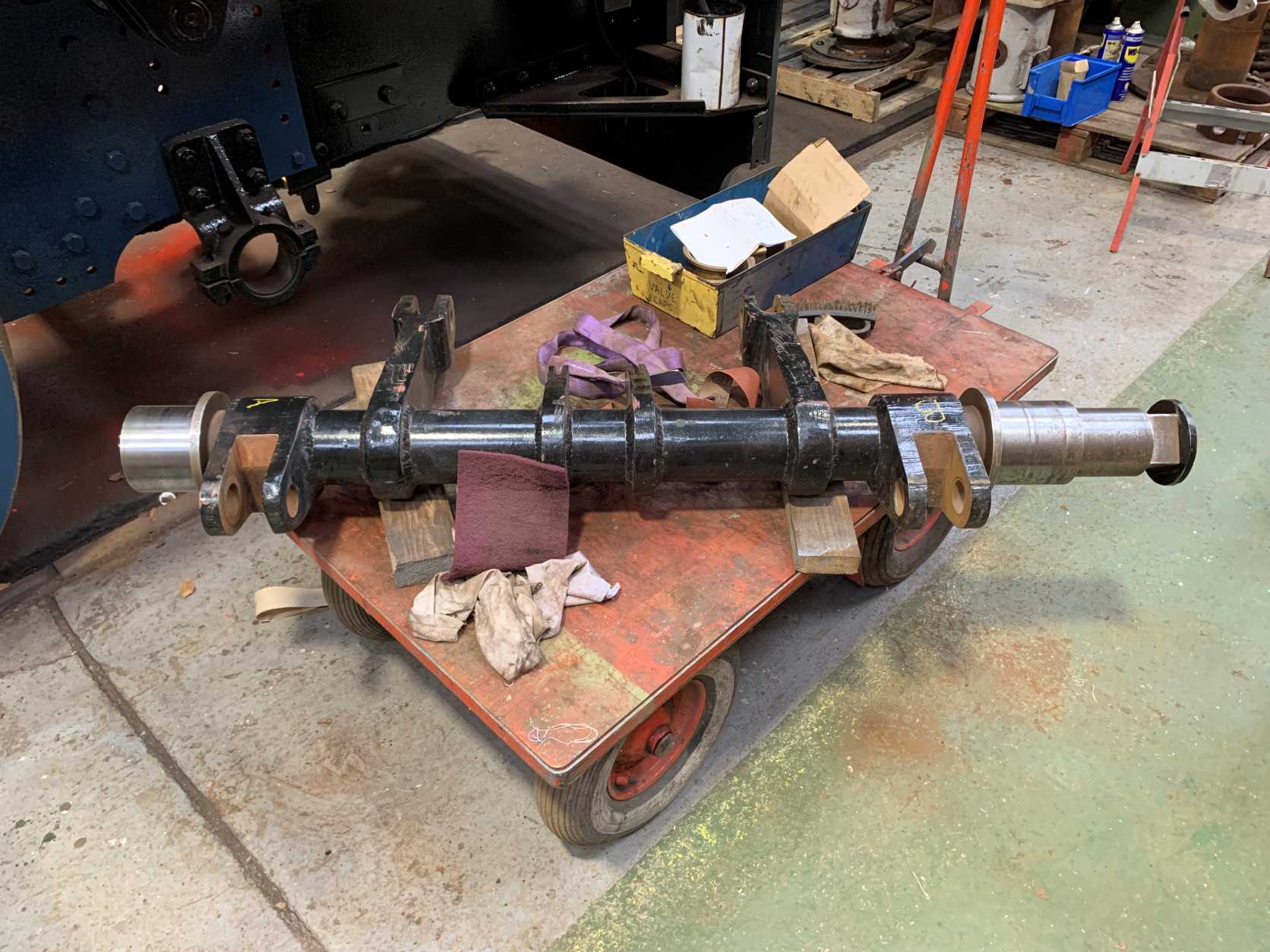 D9518 – the massive proportions of the brake cross-shaft signify that this is a genuine piece of steam-age machinery, seen here while undergoing a cleanup from Andy P at Williton on Saturday 12th February 2022. Photo by Andy Royal © CC BY-NC 3.0

In the electrical workshop, John C continued his work on the rebuilding of the electrical control cubicle, which involves disassembling, cleaning and rebuilding the many relays and contactors that control the electrical machines and systems of the loco. The significant time and effort invested here will pay back by keeping the electrical systems reliable for a long time to come. 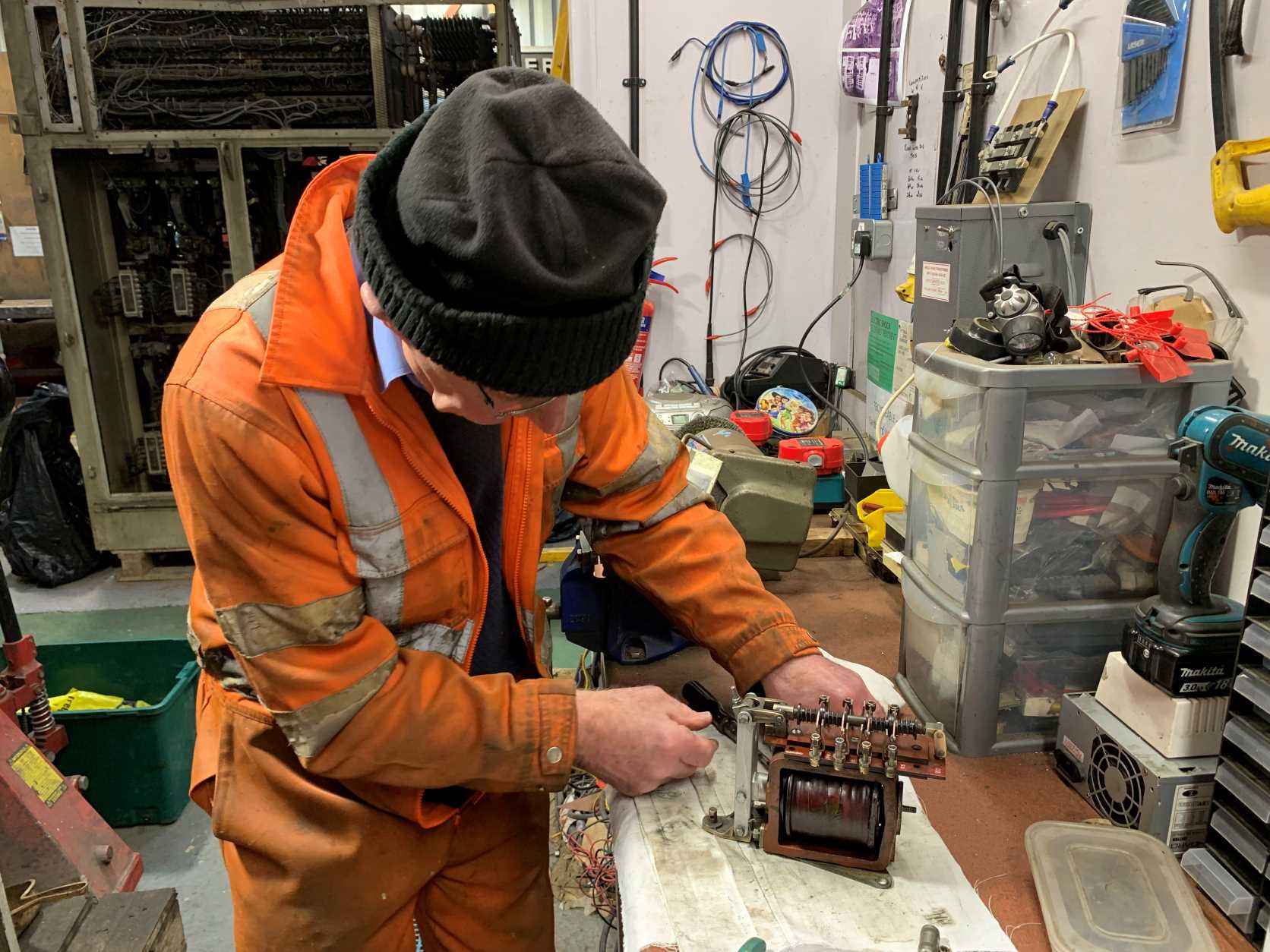 D9518 – one of the many electrical relays undergoes a thorough clean-up and close inspection from John C in the electrical workshop at Williton on Saturday 12th February 2022. Photo by Andy Royal © CC BY-NC 3.0

Class 14 ‘Teddy Bear’ D9526 – this loco is currently based at the Kent & East Sussex Railway where she was in use again last weekend. This loco has racked up so many hours that she now needs to undergo a 250-hour inspection and service this week before getting back to work on the K&ESR. We look forward to seeing D9526 back at Williton in time for the WSR’s 2022 Diesel Gala that takes place from Thursday 9th through Saturday 11th June 2022.

Andrew Barclay 0-4-0DH 578 – this loco is currently in the Swindon Shed at Williton receiving attention from the WSR Restorations team who are performing a partial repaint that will then allow the loco to be stabled in the yard for the rest of the winter. The loco is currently wearing undercoat and will receive a coat of gloss when weather conditions allow. 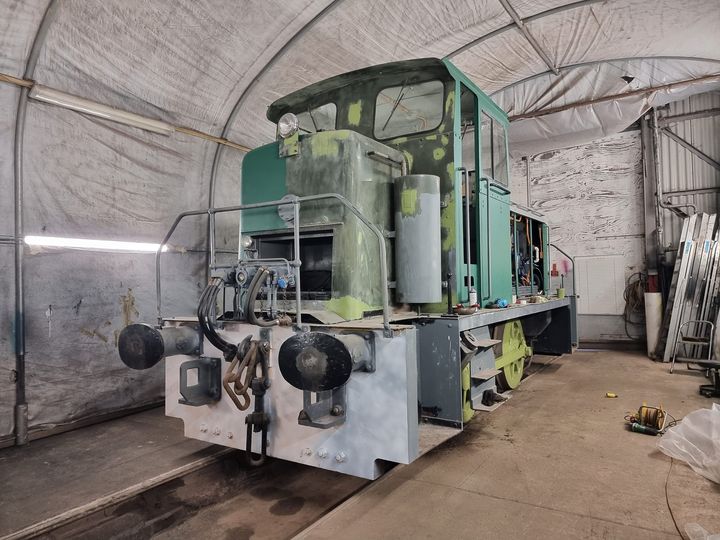 Go to the next Depot News page