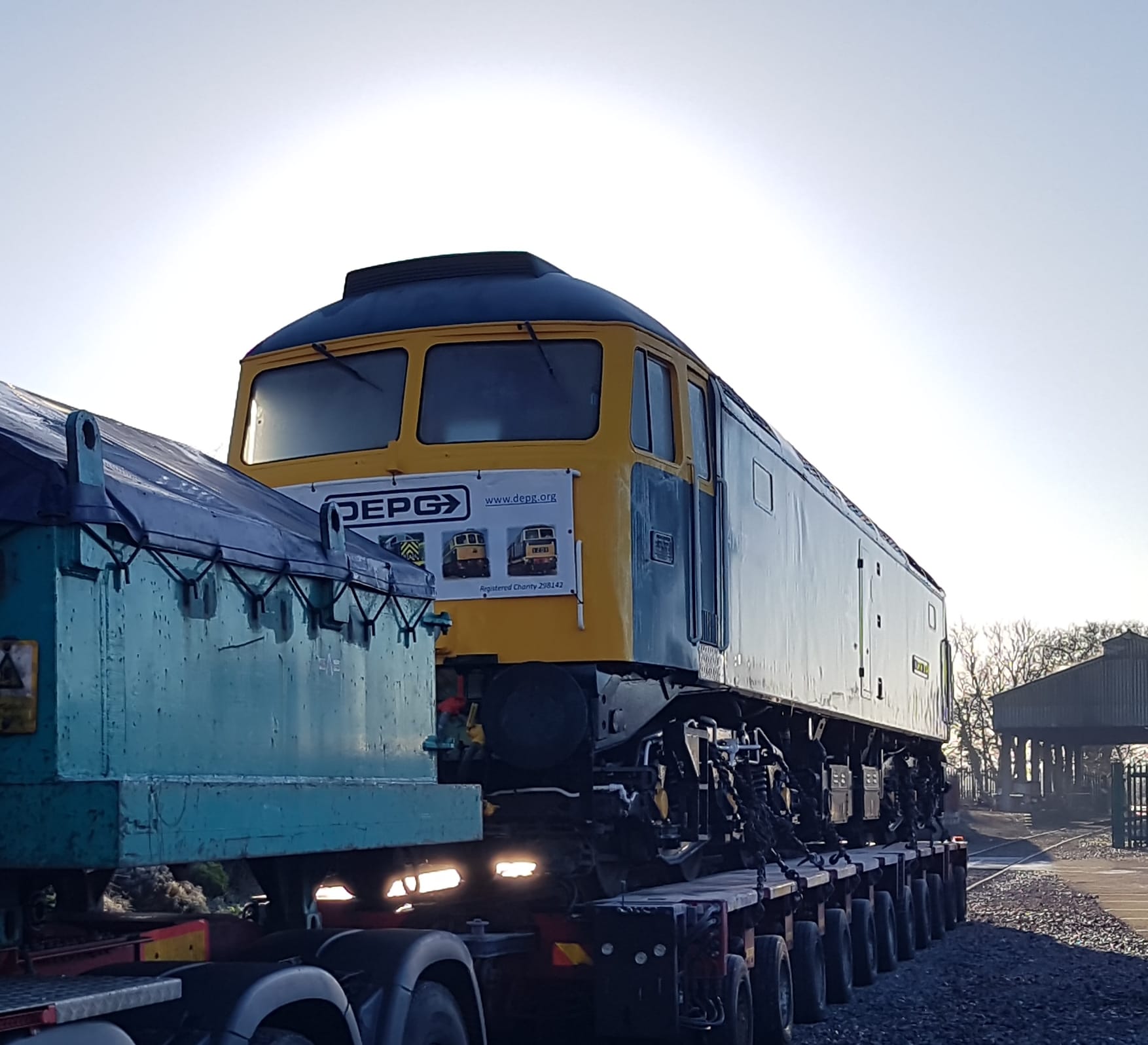 The DEPG’s BR-corporate-blue Class 47 47077 (D1661 47613 47840) ‘NORTH STAR’ was loaded onto an Allelys Heavy Haulage trailer at Bishops Lydeard on a very cold Thursday morning 13th January 2022, in preparation for a 300-mile trip to the North Yorkshire Moors Railway, where the loco will operate for the next two years. The loco wears a perfect halo that was created by the early morning sunrise. Photo by Martin Howard © CC BY-NC 3.0

The team from Allelys arrived on the Wednesday afternoon to set up their loading ramp so that the loading could commence at first light on the Thursday. The WSR team of Merv Hebditch and Paul Fleet had already started up Class 09 shunter D4107 (09 019) and were ready to propel the 118-tonne Class 47 to the first stage of the loading ramp. Once there the Allelys winch took the strain and pulled the loco up the ramp and onto the trailer, which had also been set to incline at a similar angle. This made the winching task much harder, but was done to make the ramp angle continuous. Locomotive suspension systems are not designed to cope with multiple changes in angle, so damage could easily result from such changes. 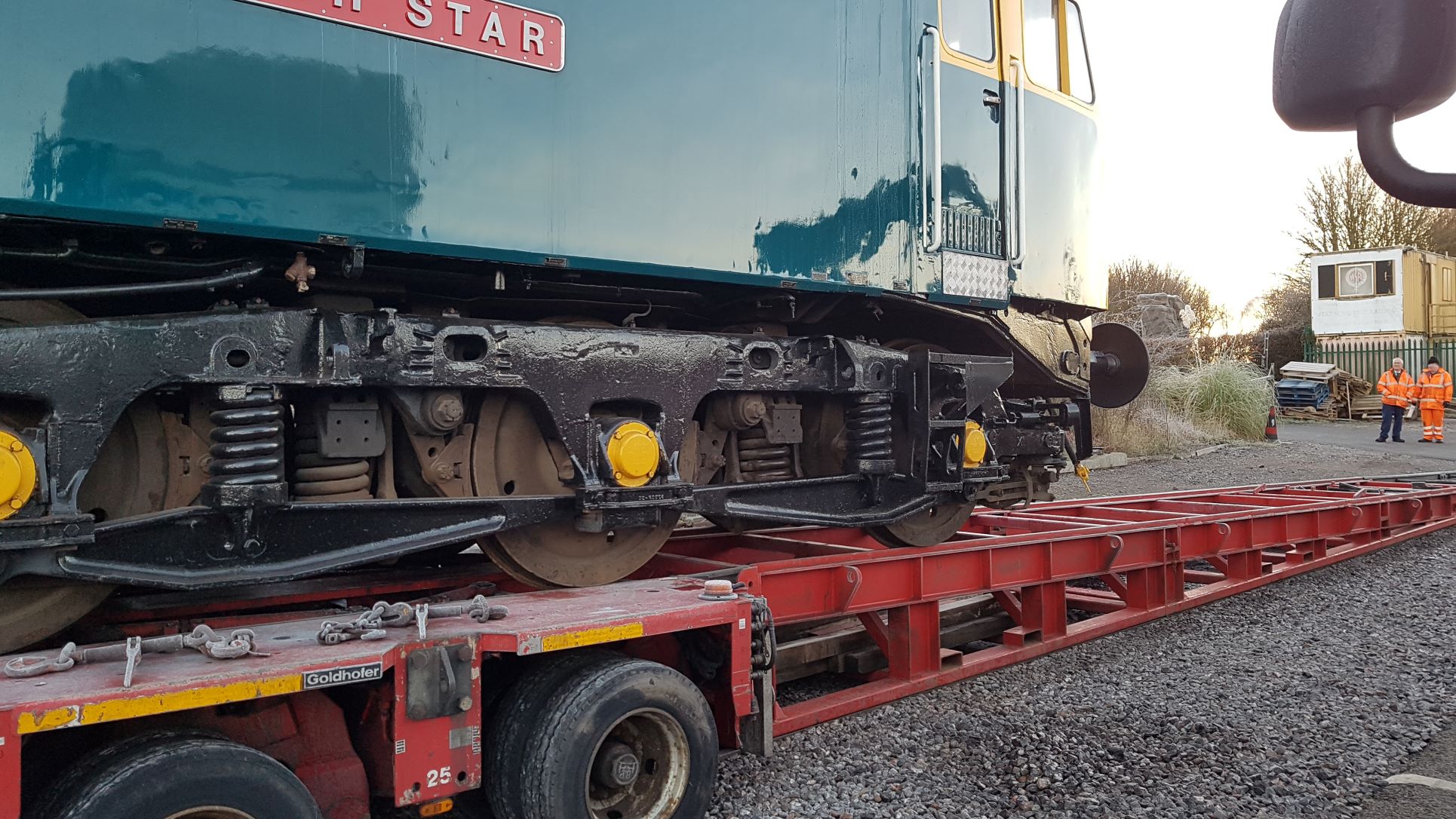 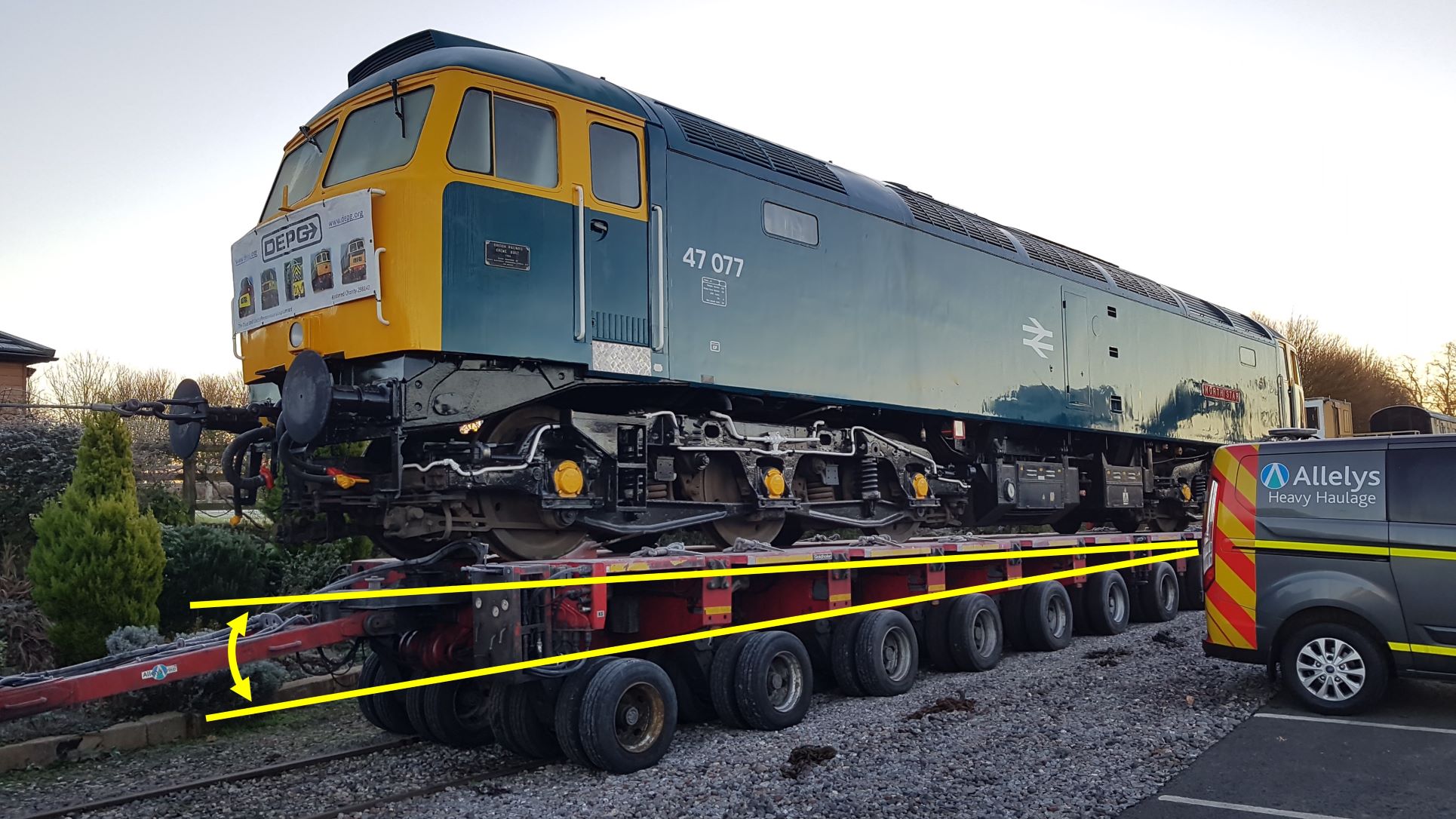 Class 47 47077 (D1661 47613 47840) ‘NORTH STAR’ shown in position on the 88-wheel trailer at Bishops Lydeard on Thursday 13th January 2022. The inclined angle of the trailer deck can be seen by the yellow lines that have been added to this photo. The incline was pre-set using hydraulic actuators that are built-in to the trailer. Photo by Martin Howard © CC BY-NC 3.0

The complicated and careful process of loading the loco can be viewed on a special page that is available on our website (click here) and in a video that has been posted to the DEPG YouTube channel and will also soon be posted on WSRTV channel, and is available by clicking on the image below: 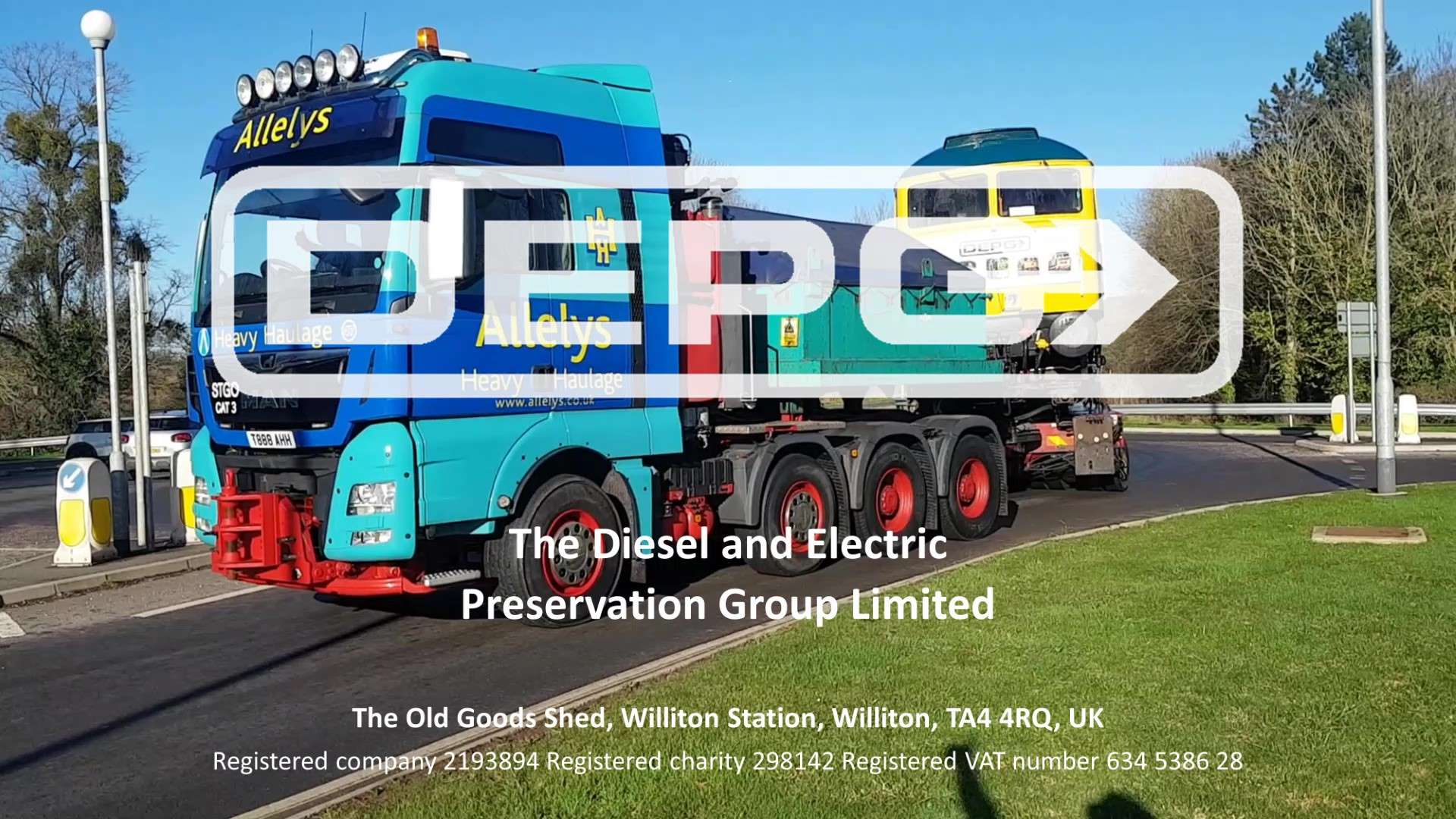 The loco has now been safely delivered to the NYMR, as you can see from their news page. She will undergo a preliminary inspection at Pickering to confirm that no damage has occurred in transit and will then be stabled securely in the new carriage shed until the bridge replacement works at Goathland are completed. While in the carriage shed the air system will be recertified for use by a contractor and once accepted as fit to run, she will be moved by rail to Grosmont loco works for completion of outstanding restoration tasks to prepare her for NYMR service. This may eventually include additional work to return her to main line standards to enable her to work to Whitby. The loco is already fitted with an early version of the mandatory Train Protection & Warning System (TPWS) for mainline use, but since this has not been used since the loco left mainline network in 2007 some updating work may be needed. We look forward to the loco being used on scheduled NYMR services in the near future!

VERY IMPORTANT DATES FOR YOUR DIARY – the WSR’s 2022 Diesel Gala will take place from Thursday 9th through Saturday 11th June 2022, so keep these dates free and make a plan to attend ! Click this link to the WSR website to view the dates for other WSR events that are planned for 2022.

Class 52 D1010 ‘WESTERN CAMPAIGNER’ – we have plenty more progress to report on this loco, with both new (Chris) and returning (Geoff) volunteers bringing their efforts and expertise to bear in addition to our regular team of Gordon, Leroy, Ian F and Colin F. The more the merrier, because this is a big project on a very big loco and there is plenty to do, both on and off the loco. If you want to help, JOIN US and come along to the depot on a Saturday for an introduction to what we do and how we do it. Here’s some photos of the work that has taken place during the last few days: 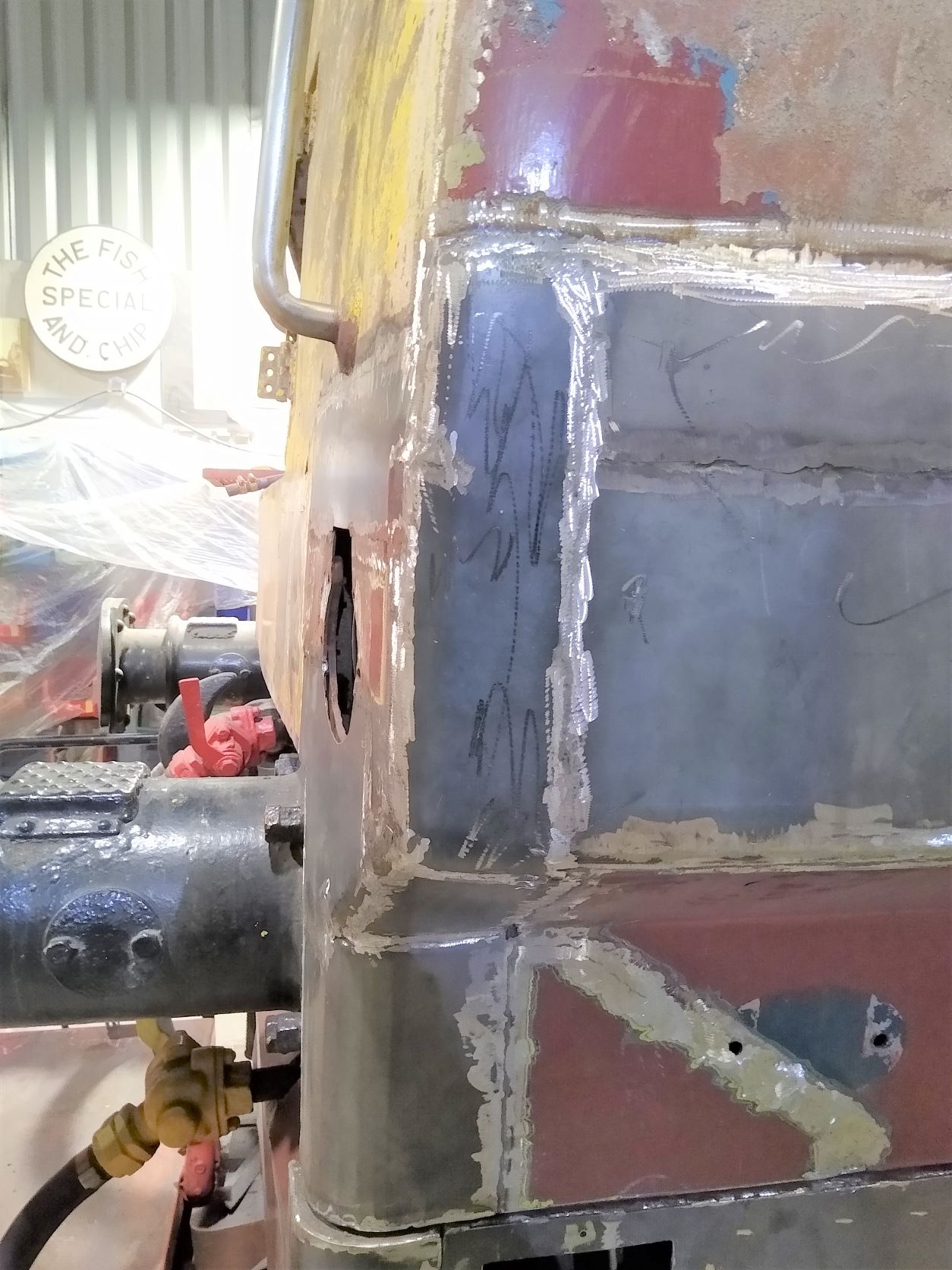 D1010 – the rebuild of the front corner on the driver’s side of ‘B’ end cab has been completed by Colin and is now ready for rubbing down and painting. Pictured at Williton on Monday 11th January 2022 by Colin Foxhall © CC BY-NC 3.0 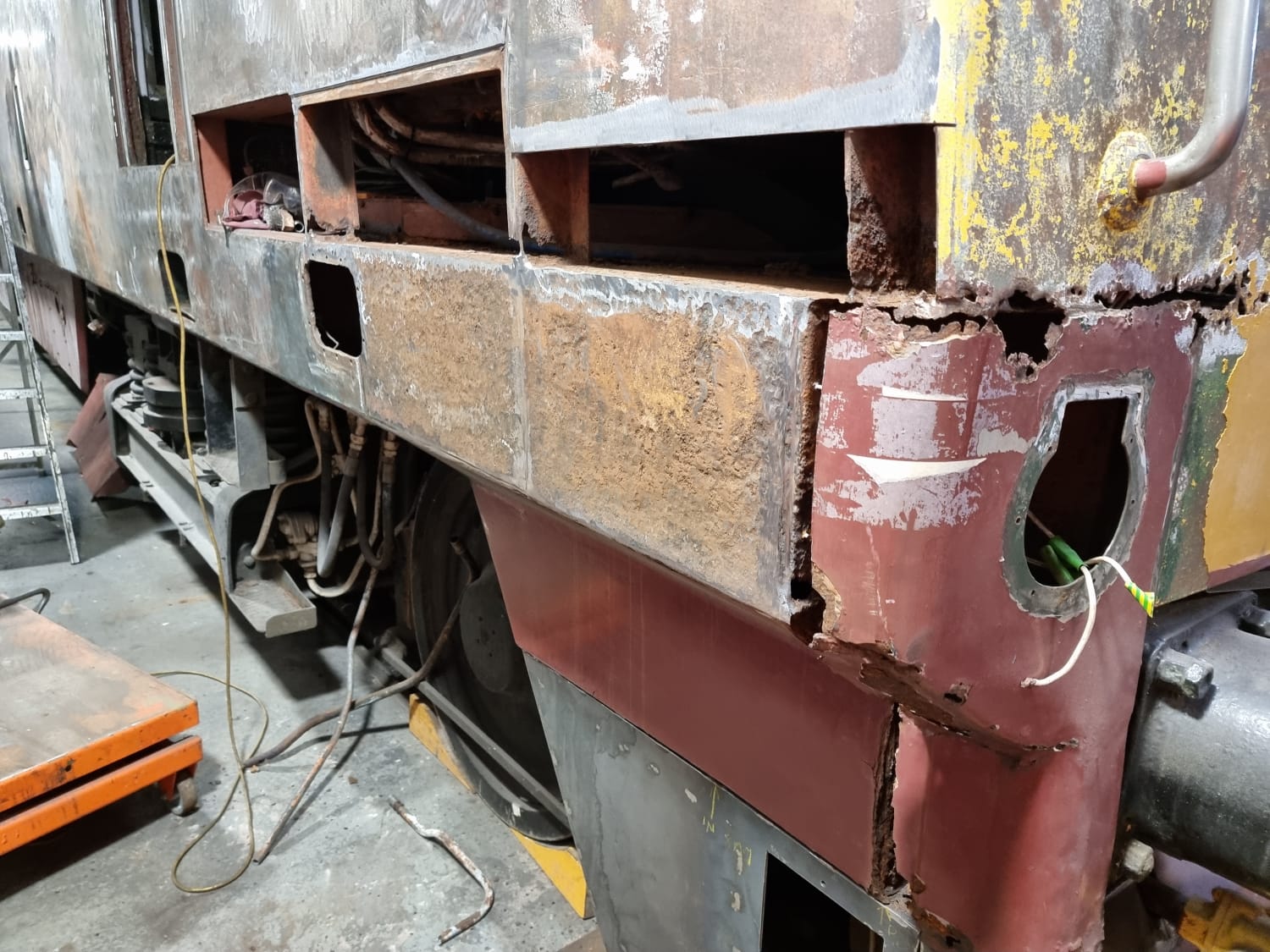 D1010 – Colin’s attention then shifted to the opposite side of the cab. In this picture, taken at Williton on Saturday 15th January 2022, the corroded skin has been cut away, exposing the corroded supports that have to be replaced before the new skin can be attached. Photo by Leroy Ford © CC BY-NC 3.0 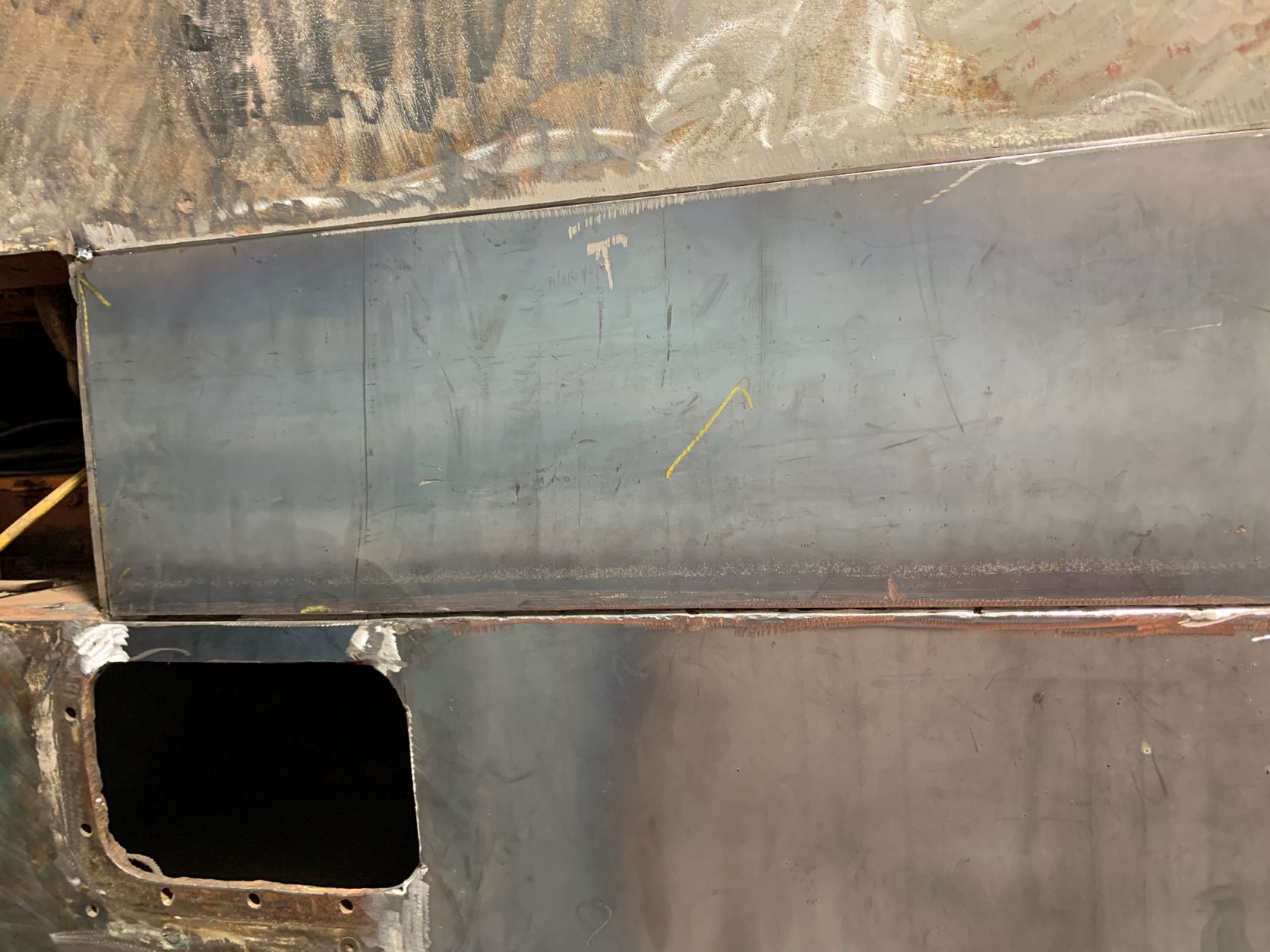 D1010 – after repairing the underlying structure, Colin then prepared the new steel for the replacement skin and tack-welded it into place as a temporary measure. Pictured at Williton on Sunday 16th January 2022 by Andy Royal © CC BY-NC 3.0

The highly visible and excellent progress on the bodywork is the most newsworthy aspect, but there is plenty of effort being expended on the unglamorous task of needle-gunning the entire loco, including the roof, and repairing the many other small items such as hinges and stays, conduits and pipework, all of which has suffered from the effects of the weather over the last 50 years (D1010 last underwent a major works overhaul at Swindon in 1972 – see our D1010 timeline page for details). 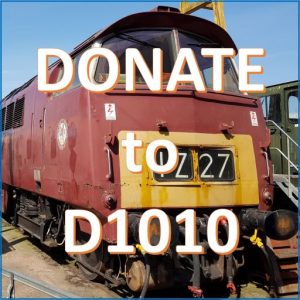 Class 33 D6566 (33 048) – this loco is now back at Williton undergoing some minor repairs, which on Sunday 16th January involved the re-sealing some of the cab windows following reports of rainwater ingress. No doubt we won’t have to wait too long before we find out if the repair has been succesful ! 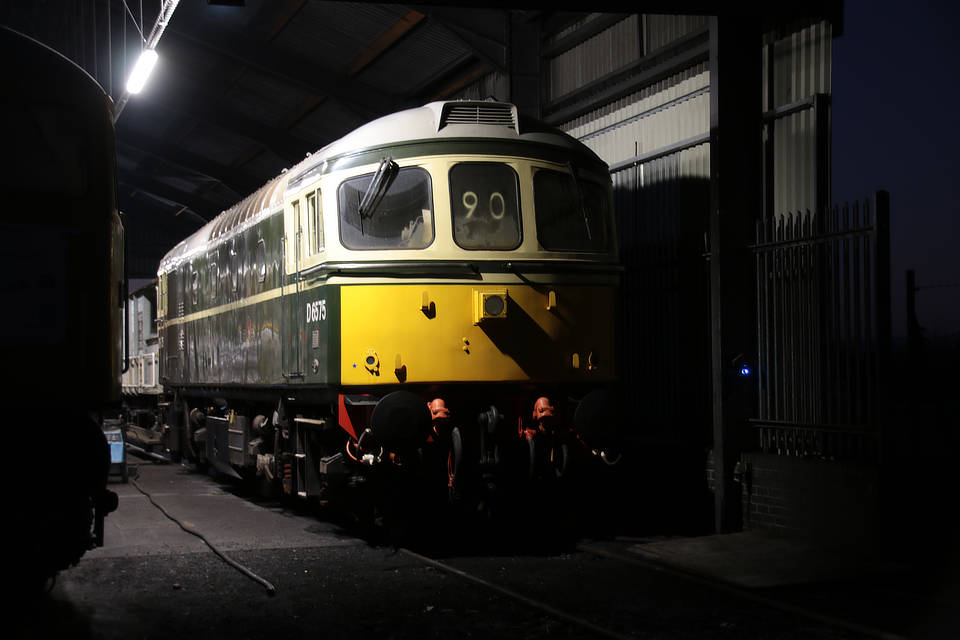 Class 35 ‘Hymek’ D7017 – work proceeds on fitting additional fuse protection into the electrical feed for the compressor to ensure that, if a fault was to occur with the compressor, any damage would be minimised and localised. The same modification was performed on sister loco D7018 when that loco was rebuilt. The level of protection that was included when the loco was new was minimal. The suspension repair work that is keeping her out of service has had to be deferred until we are able to get the 60-year-old loco over the pit in the Swindon Shed (hopefully in March or April).

Class 35 ‘Hymek’ D7018 – as stated last week, this loco will celebrate her 60th birthday on 18th January 2022, the loco having entered service at Bristol Bath Road depot on that day in 1962. To make sure that she is available to work later in the year, our Chairman Martin Howard has resumed his work on disassembling the transmission control block to identify the issue that is preventing the automatic gear change from functioning. The current plan is to removed the control block for detailed attention and meanwhile install the ‘known good’ control block from D7018’s ‘old’ transmission. However, that transmission was last used in 1995, so we will have to wait and see how this pans out. One way or another, the loco will be ready for the WSR Diesel Gala (from 9th to 11th June). Read about the history of this loco in our 64-page A4 booklet ‘HYMEK D7018‘. 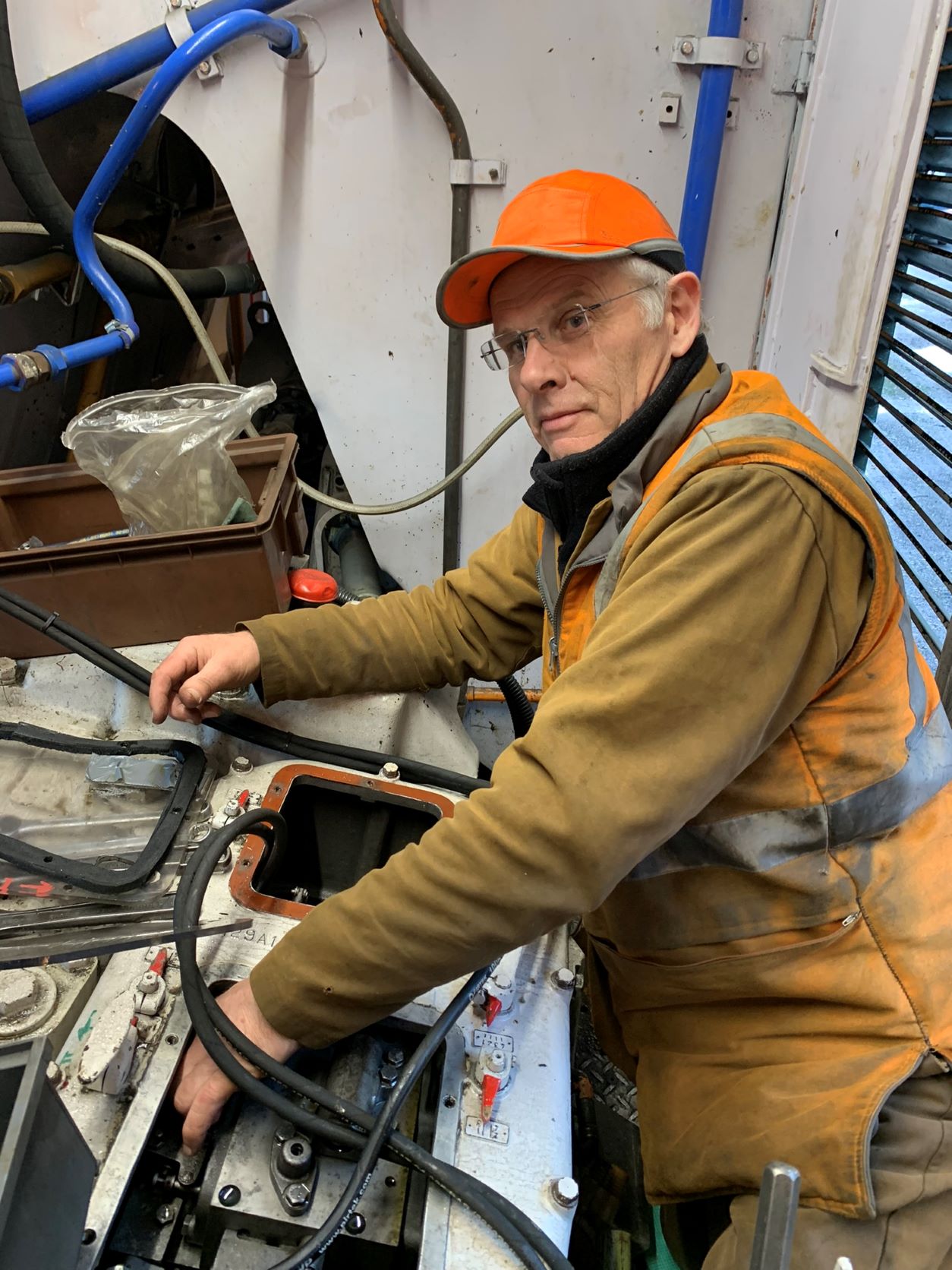 DEPG Chairman Martin Howard reaches into the Stone-Maybach Mekydro hydraulic transmission housing to disconnect the pressure lines that are attached to the control block of ‘Hymek’ D7018. Pictured at Williton on Sunday 16th January 2022 by Andy Royal © CC BY-NC 3.0

Class 14 ‘Teddy Bear’ D9518 –  work continues on the identification and refurbishment of the many pipes and conduits that need to be refitted to the frames before the major subassemblies can be re-installled. The progress over the next few weeks is going to be that of detail, with effort going into so many small tasks in preparation for the next ‘big one’. 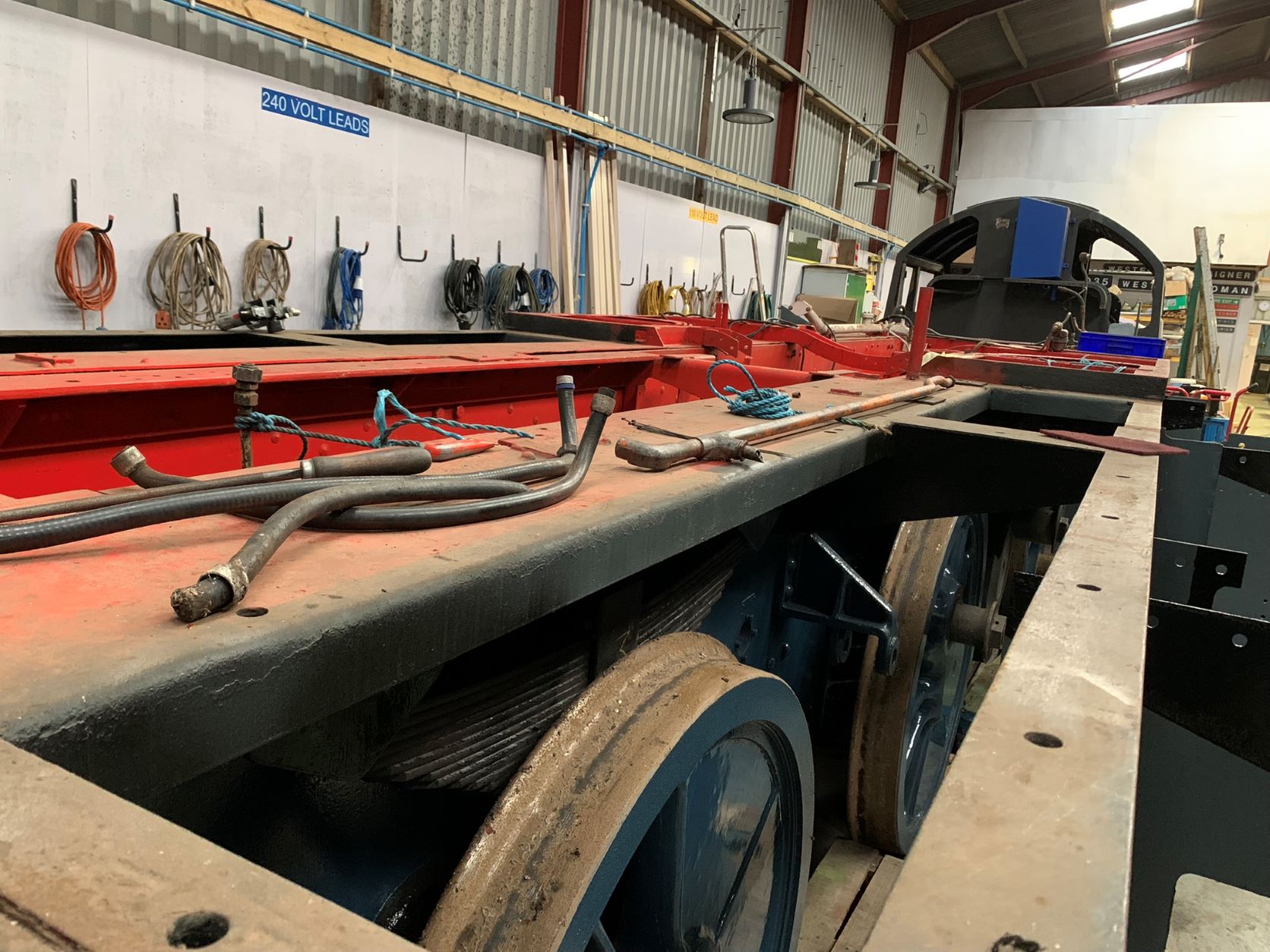 D9518’s ‘rolling chassis’ on number 2 road inside the DEPG loco shed with various pieces of pipework and electrical conduit placed in the approximate location for re-installation. Each piece has to be cleaned, inspected and refurbished where necessary before being fitting back on the loco frames. Painstaking work indeed. Photo taken at Williton on Saturday 8th January 2022 by Andy Royal © CC BY-NC 3.0

The constant progress on this loco project has been made possible by the efforts of volunteers and the donations of the many ‘Teddy Bear’ supporters who have contributed to the D9518 Restoration Appeal. Thank you all very much !

Class 14 ‘Teddy Bear’ D9526 – this loco is currently based at the Kent & East Sussex Railway and celebrated her 57th birthday on the 6th January 2022. We have received confirmation that the loco will remain at the K&ESR until May 2022, by which time her older sister D9504 should have completed her heavy overhaul and be returned to traffic. We look forward to seeing D9526 back at Williton in time for the WSR’s 2022 Diesel Gala that takes place from Thursday 9th through Saturday 11th June 2022.

Andrew Barclay 0-4-0DH 578 – last week, we featured a photo that showed this loco (or her sister loco 579) working a short train of vans, probably carrying explosives, crossing the bridge over the M5 motorway just a short distance from the Royal Ordnance Factory (ROF) at Puriton, near Bridgwater. The point of the photo was to highlight the apparent efforts that are being made to clear the route and assess the feasibility for laying new track to the former ROF site, which is earmarked for a new factory development for the production of electric vehicles. Regular correspondent Neale Long discovered that the branch is being considered for re-opening in connection with the Rivian Electric Truck Vehicle plant that may be built on the old ROF site. The ground frame / rail connection that was controlled by Bristol Power Box was removed over 20 years ago. Thanks, Neale – let’s hope that this project gets the go-ahead and brings more work and more trains to the area. Maybe we can hire number 578 out to them and see her cross the M5 once again!

Andrew Barclay 0-4-0DH number 578 or 579 pictured on the bridge over the M5, just north of Bridgwater with a short train of explosives from the Royal Ordnance Factory (ROF) at Puriton (which closed in 2008). Photo by Paul Stanford courtesy of the Cornwall Railway Society © CC BY-NC 3.0