This week, we have plenty of ‘action’ photos showing the team back at work at Williton, hard at work on our several of our locomotives. We are still restricting the number of people on site at any one time, but we were able to operate on four days out of the last seven and we have made progress on multiple fronts. Here goes:

Saturday 17th April 2021 – Ian led the electrical work on 47077 which included inspections and scheduled maintenance on the electrical auxiliary machines (compressors, exhausters, blowers, pumps) and Gordon led the work on the refitting of the ‘NORTH STAR’ nameplates, which look very good indeed after careful restoration by Graham. Meanwhile, the Class 14 team comprising Simon, Colin and Terry made progress on the major subassemblies of D9518. 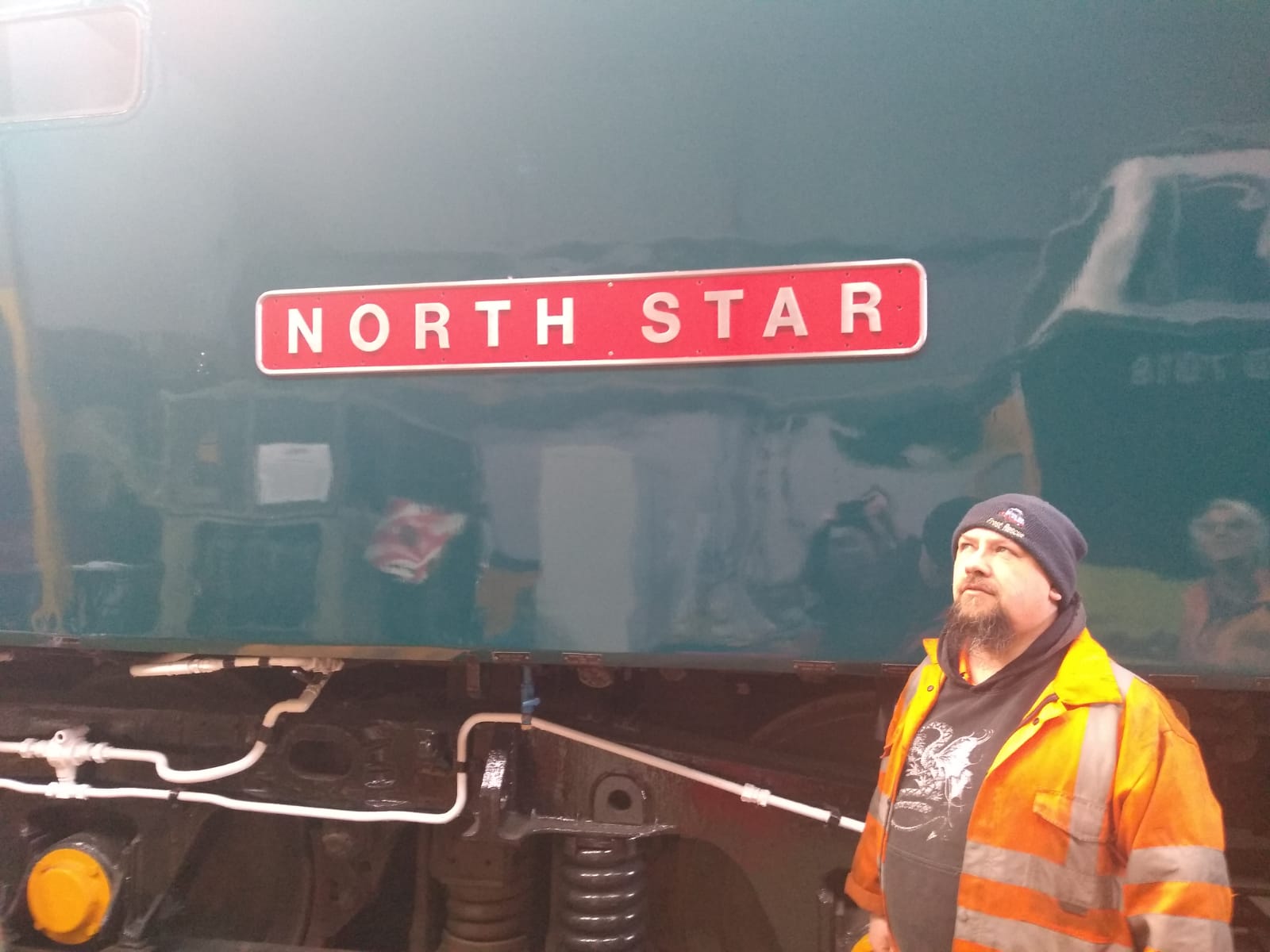 Class 47 47077 ‘NORTH STAR’ gets reunited with her nameplates at Williton on 17th April 2021, modelled by Warren. The nameplates have been painstakingly restored by Graham and now carry the red background that was typical of the 1970s. A reflection of Gordon and ‘Hymek’ D7018 can be see in the glossy rail blue paintwork that was applied by WSR Restorations at the Swindon Shed in October 2019. Photo by Ian Robins © CC BY-NC 3.0 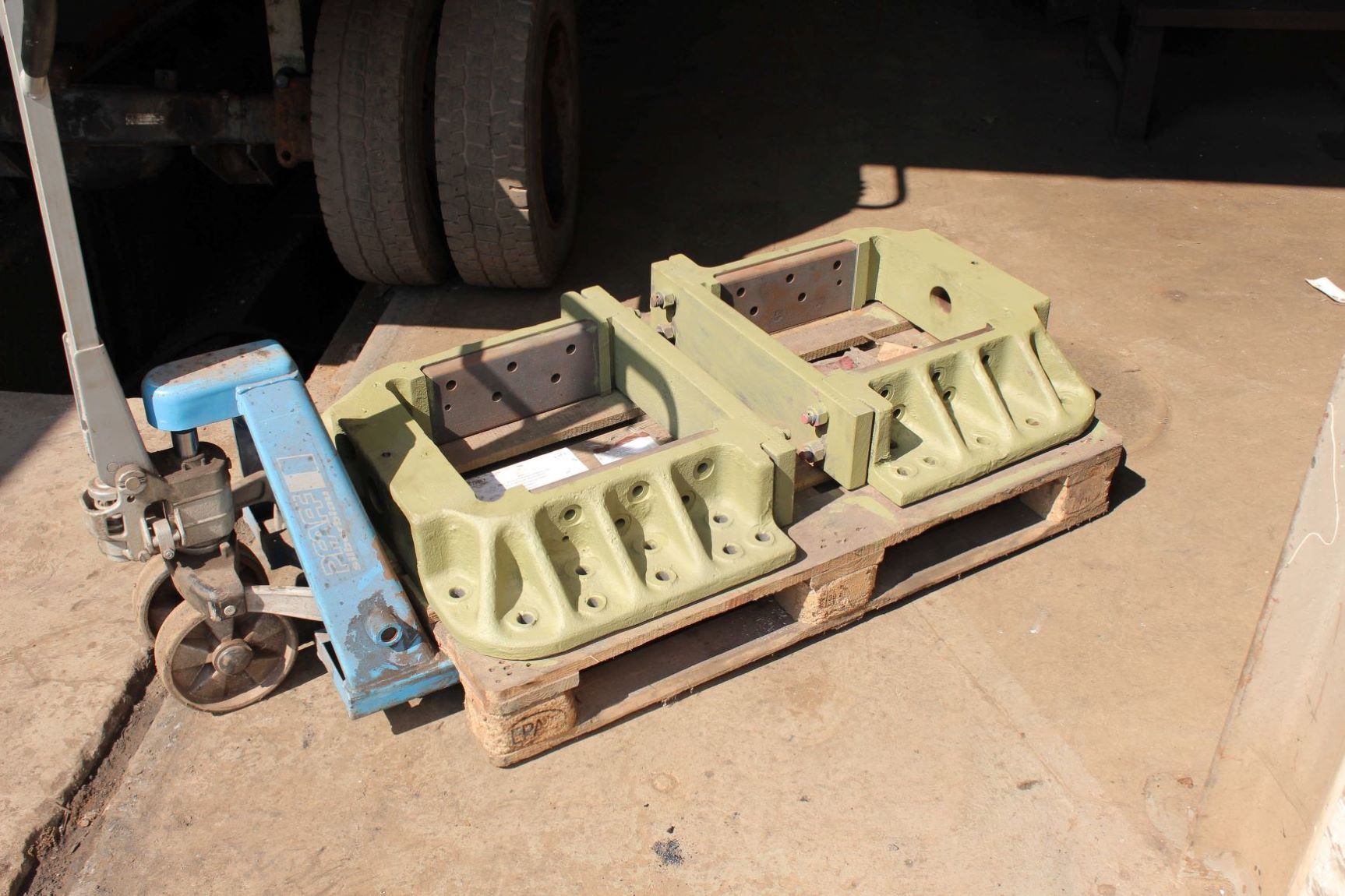 One pair of D9518‘s hornguides seen here at Williton on 17th April 2021, being prepared by Simon and Terry before re-fitting to the loco. Photo by Terry Deacon © CC BY-NC 3.0 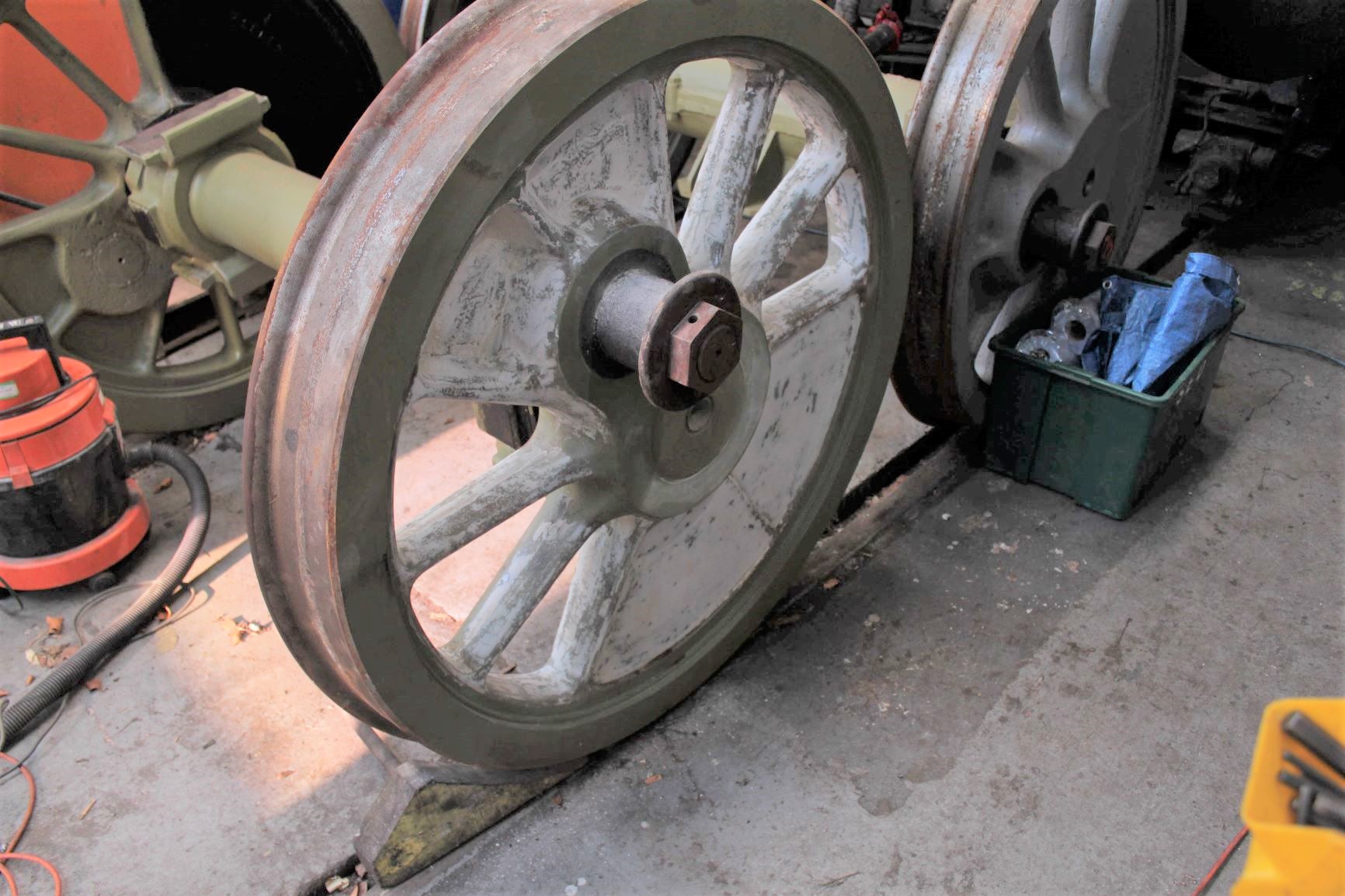 Meanwhile, D9518‘s wheelsets get special treatment from Colin at Williton on 17th April 2021. The rough cast surface finish of the wheel hubs and spokes have been filled and will be sanded to provide a smooth finish before painting. A smooth finish on the wheels is much easier to keep clean compared to rough cast finish. Photo by Terry Deacon © CC BY-NC 3.0

Sunday 18th April 2021 – Ian made a temporary focus shift to the diesel-hydraulics and was captured on the depot CCTV cameras washing ‘Hymek’ D7017, the local seagulls having been using the loco for target practice. The faded paintwork of D7017 certainly needed some TLC. 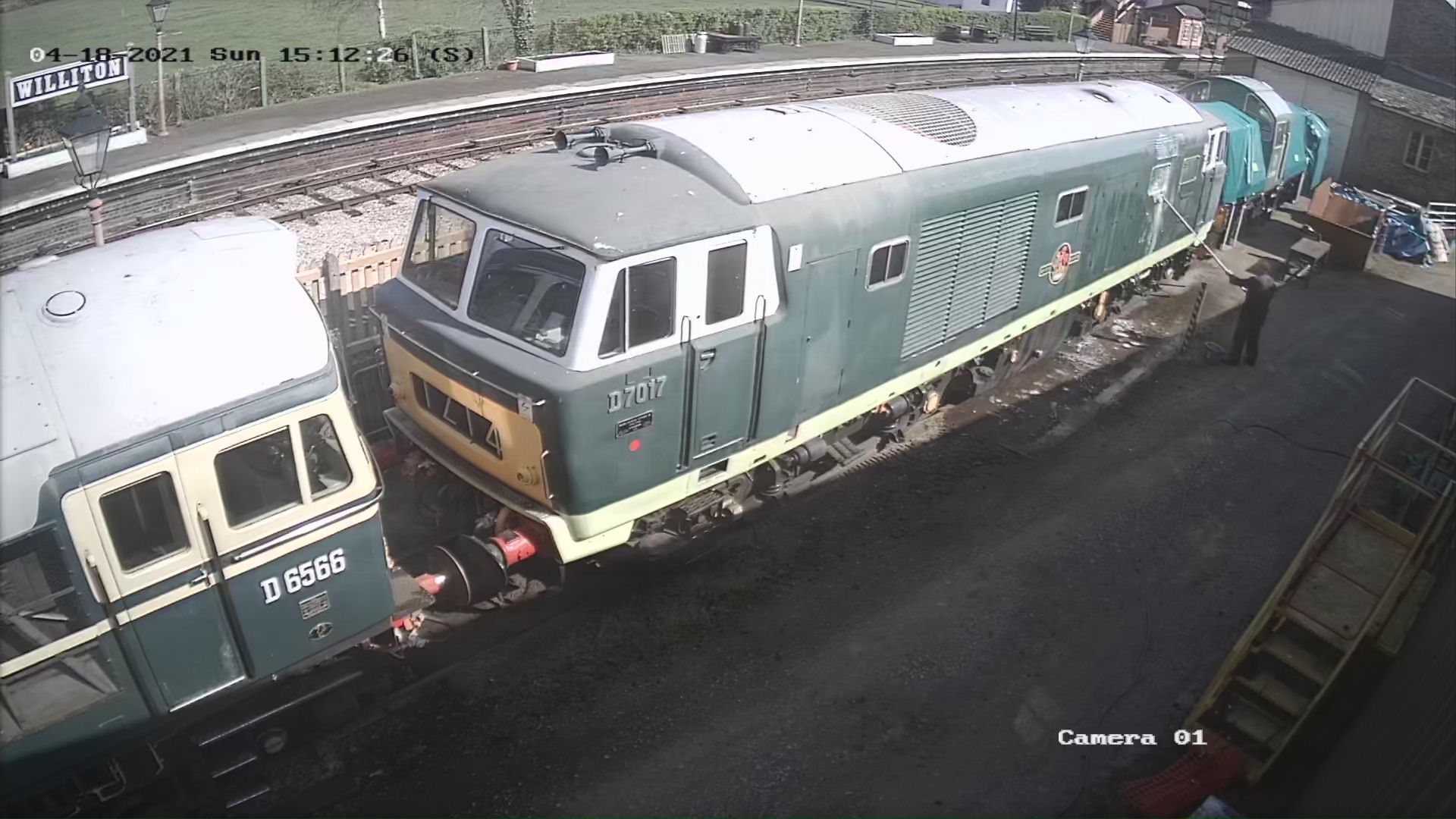 Captured by the Williton depot CCTV system, Ian can be seen washing the sun-bleached and weathered paintwork of ‘Hymek’ D7017 on 18th April 2021. This loco is out of service and is waiting to be lifted so that her bogie springs can be replaced, hopefully some time this summer. Photo DEPG © CC BY-NC 3.0

Tuesday 20th April 2021 – a team of four led by Terry made progress on the main frames and horn guides of Class 14 D9518 and also started repairs to the sand boxes. We welcome new members and volunteers Colin Foxhall and Chris Lawton to the DEPG team and we hope to see them at Williton on Tuesdays in future, along with our new Publicity Officer and long-time member Mark Bladwell. All three are seen in the photos below, hard at work on the sand box restoration. Sand is used to provide extra grip if the wheels start to slip on a greasy rail. The delivery of the sand to the rail is carefully controlled by a valve to ensure that the minimum amount of sand is used. This basic and simple method of maintaining traction is still used on mainline locomotives today. 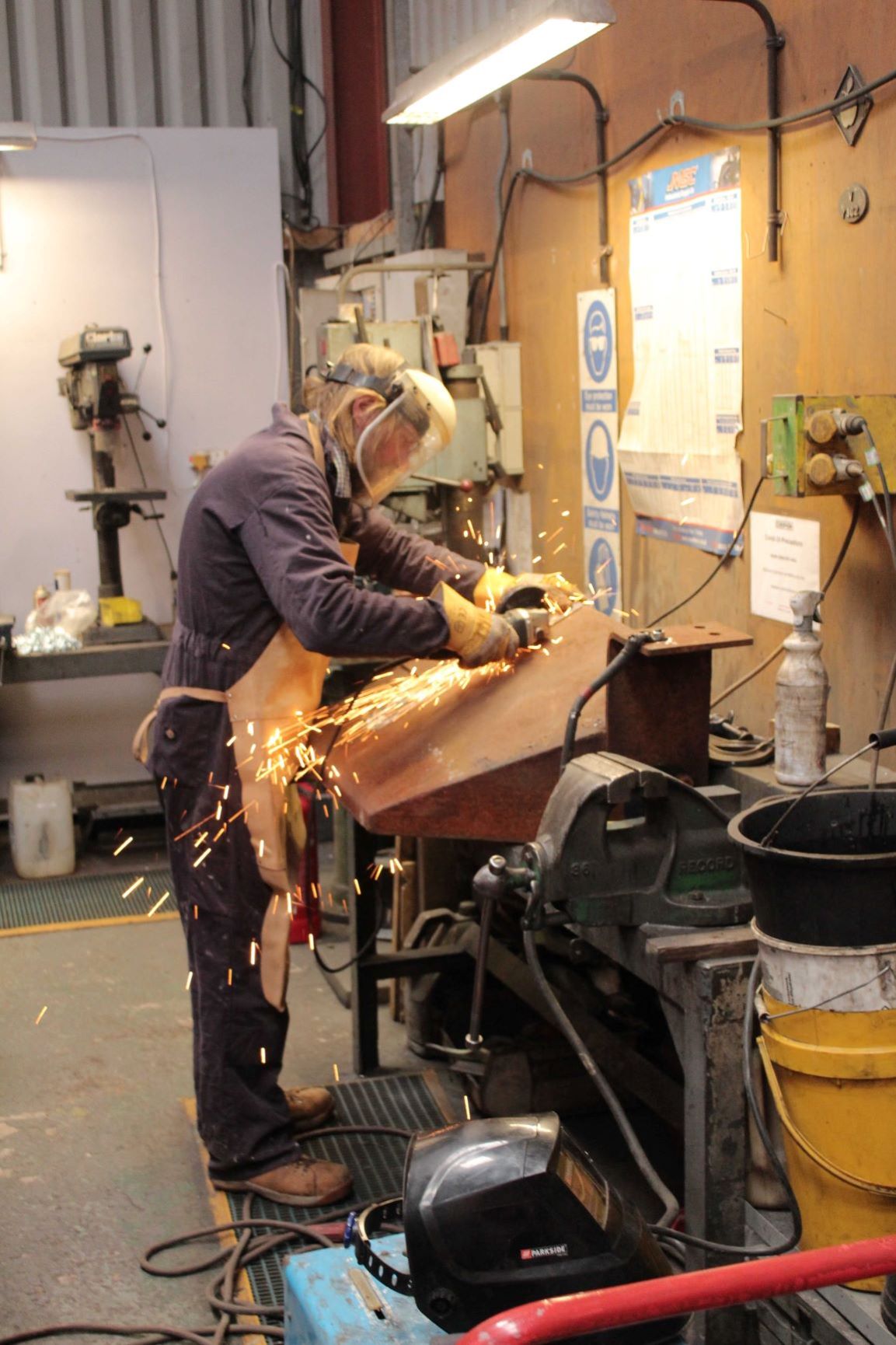 New member and volunteer Colin uses his restoration skills to attend to an area of thin metal on one of the sand boxes for D9518. Photo taken at Williton on 20th April 2021 by Terry Deacon © CC BY-NC 3.0 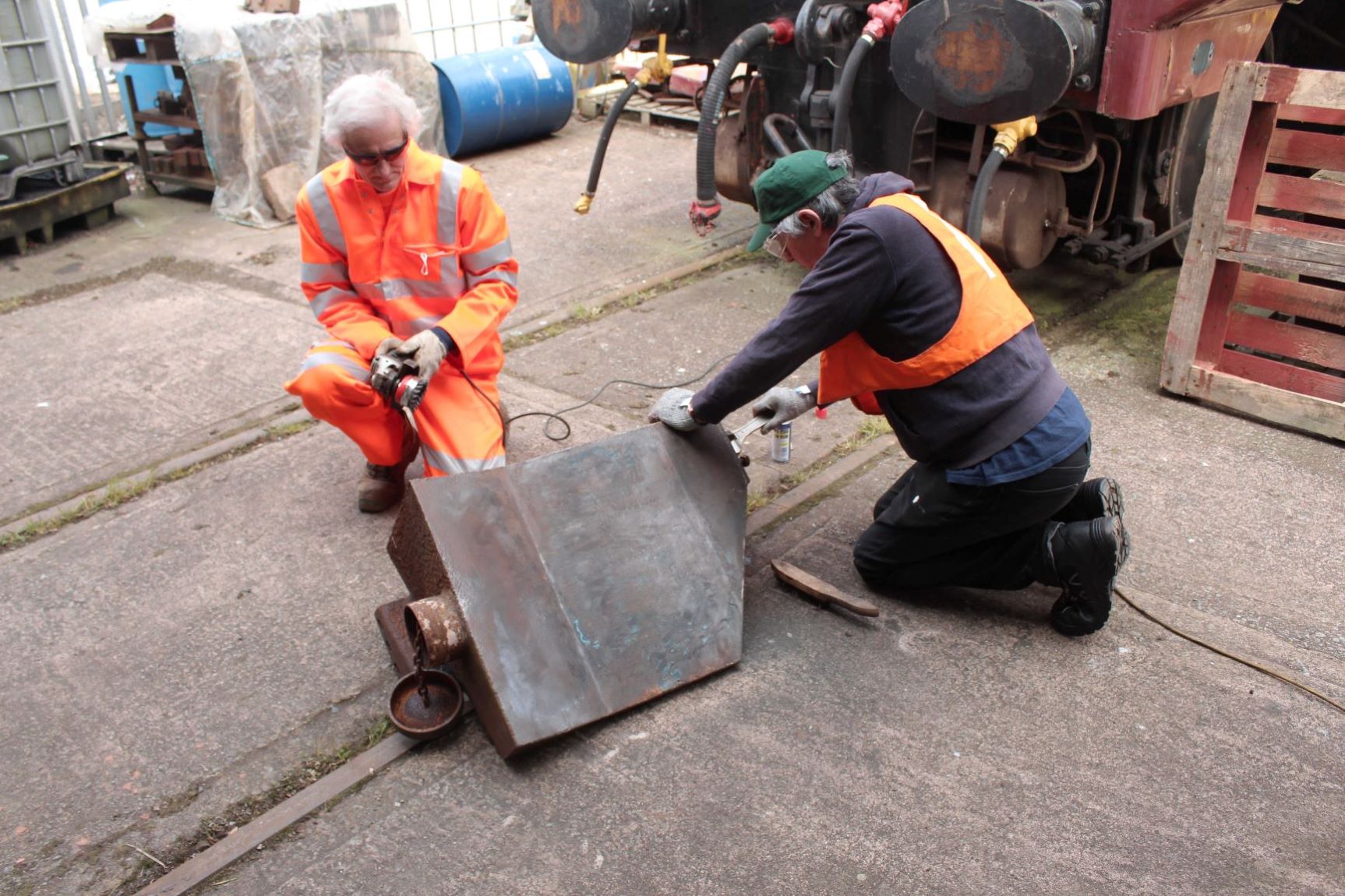 New member and volunteer Chris (left) is no stranger to the WSR because he is also a member of the WSR volunteer PW gang. He is seen working on one of the sand boxes for D9518 along with long-time DEPG member and Publicity Officer Mark at Williton on 20th April 2021. Photo by Terry Deacon © CC BY-NC 3.0 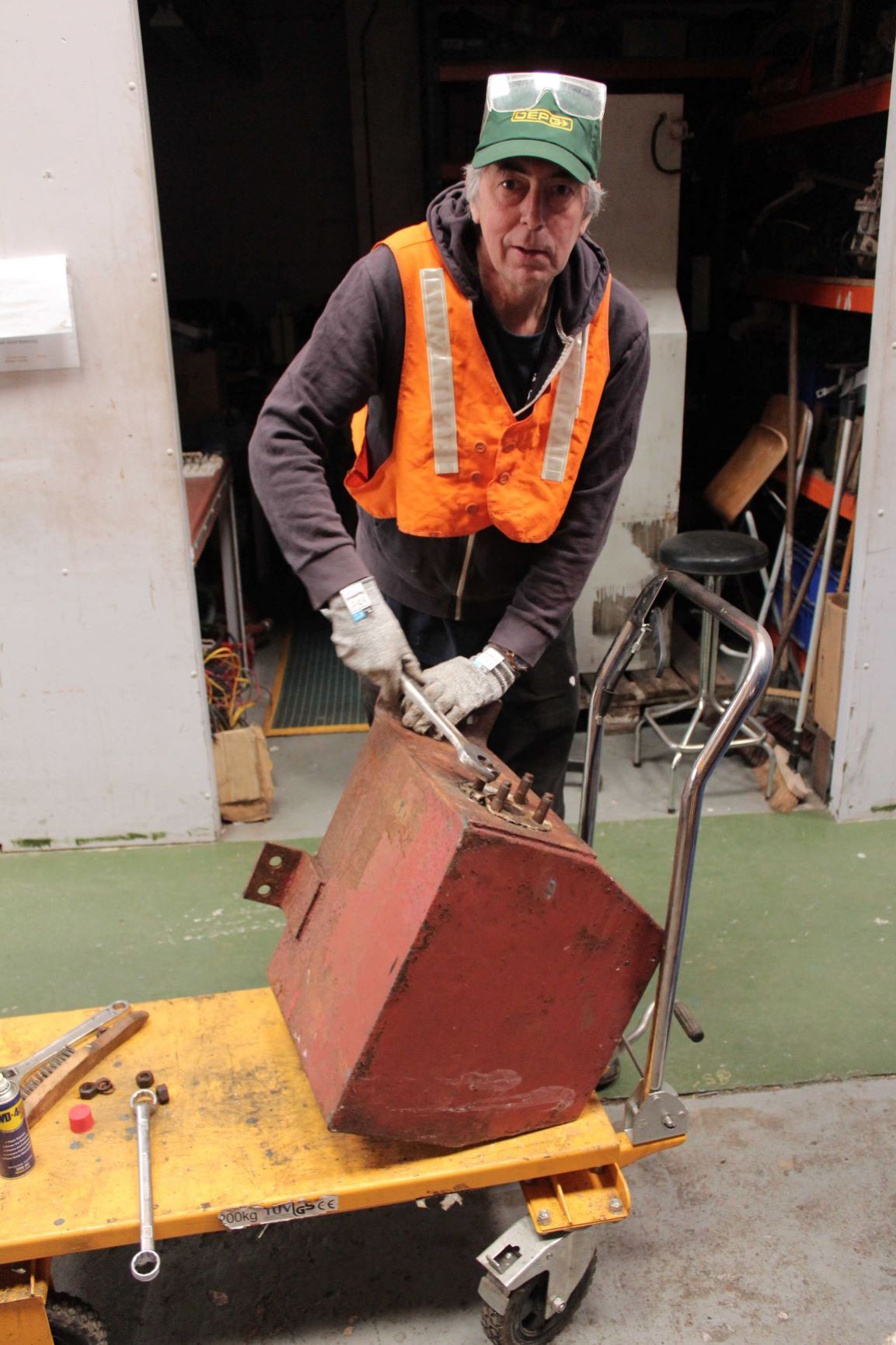 Another picture of Mark, this time at work freeing-up the threads on one of the sand boxes for D9518 at Williton on 20th April 2021. Photo by Terry Deacon © CC BY-NC 3.0 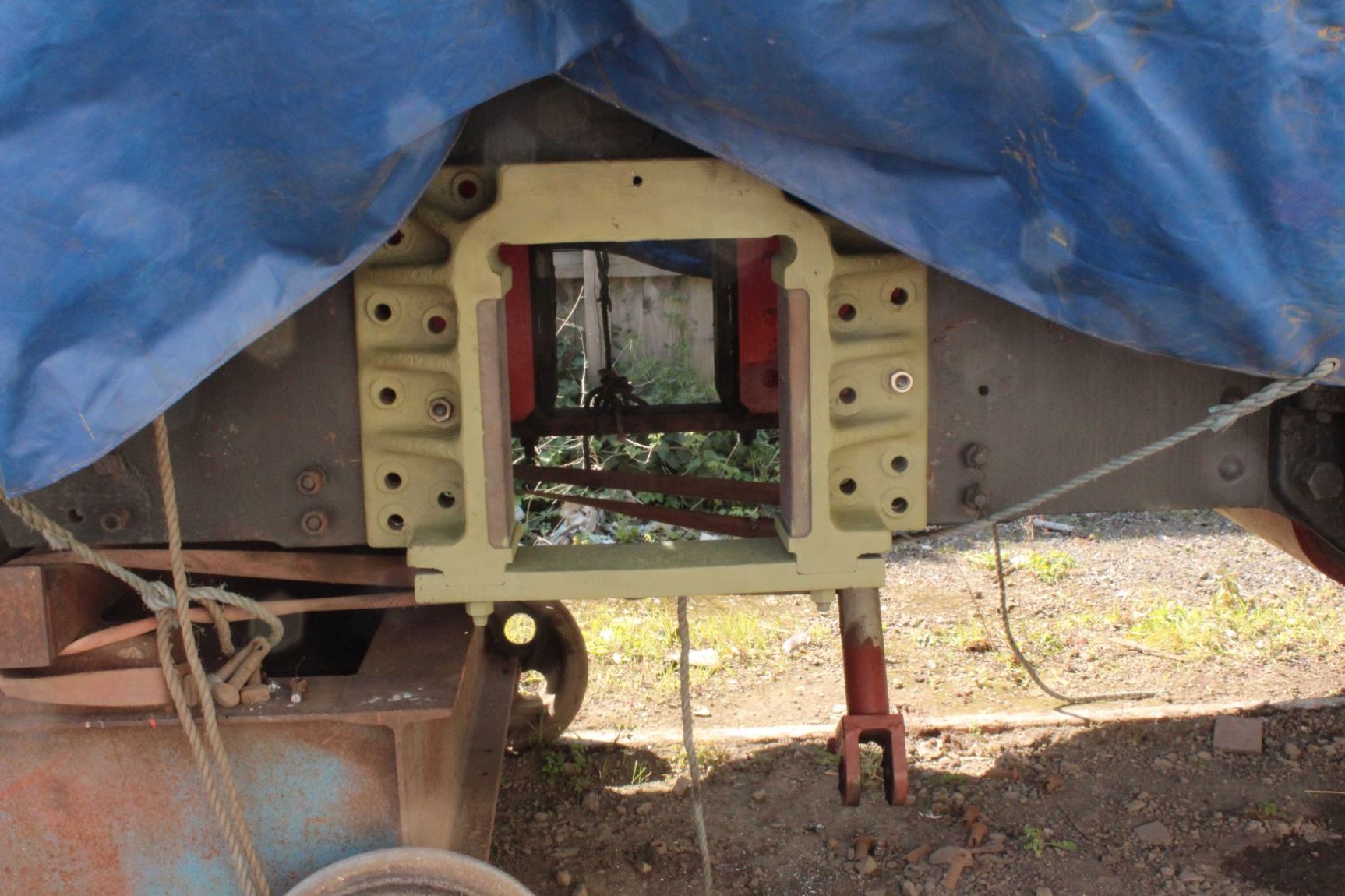 The first of six hornguide assemblies has been offered up to the frames of D9518 as a trial fitment. After careful positioning, the hornguides will be rivetted to the loco frames using techniques that are exactly the same as those used for steam locos, so the task will be subcontracted to WSR Restorations at the Swindon Shed. Photo taken at Williton on 20th April 2021 by Terry Deacon © CC BY-NC 3.0 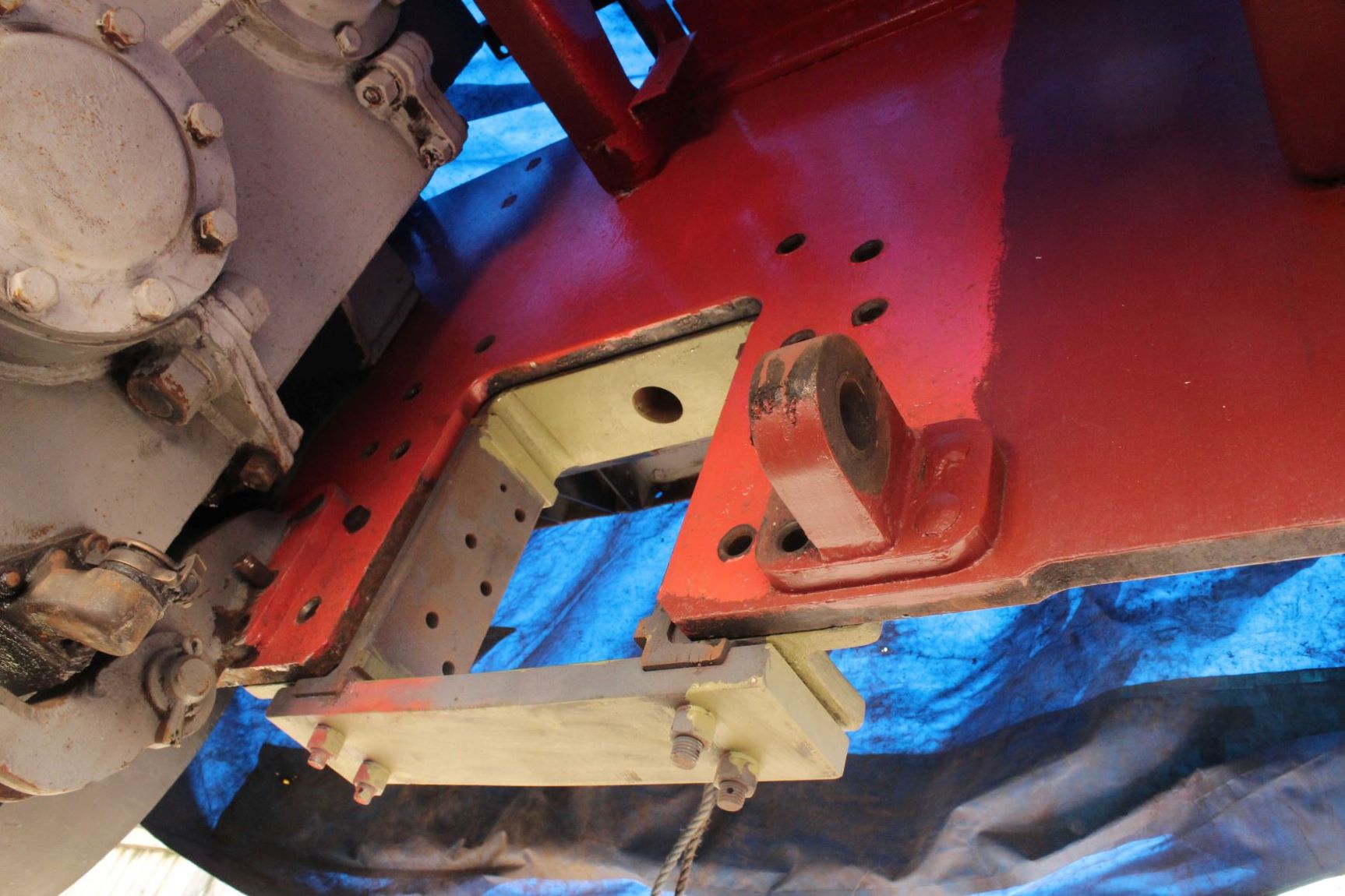 Wednesday 21st April 2021 – Andy and Natalie progressed the re-paint in the former boiler room and engine room of 47077 ‘NORTH STAR’, getting to some of the areas that are difficult to access.

Many thanks to all our volunteers for your hard work on all of our locomotives!