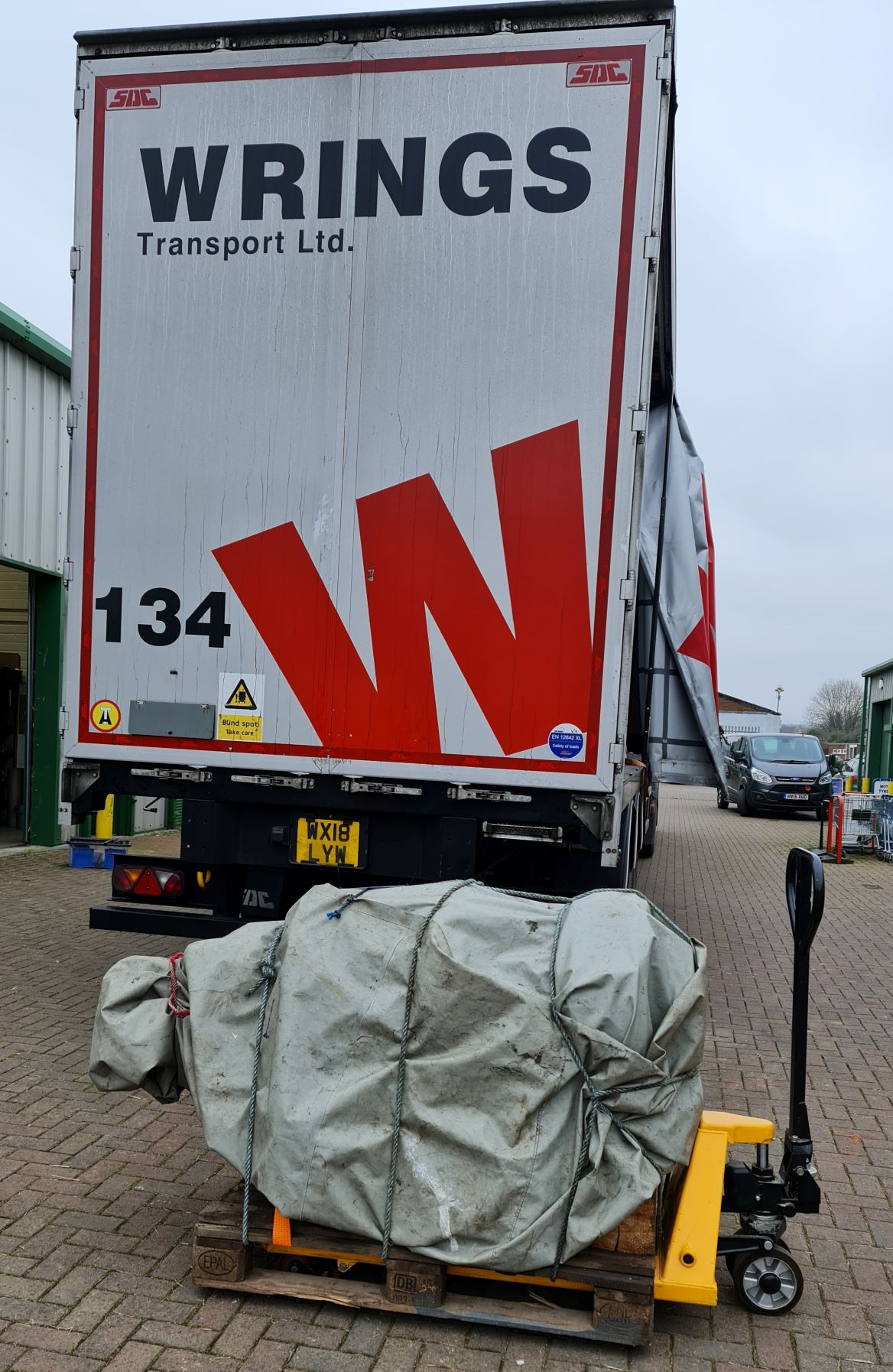 The torque converter rail from the transmission of D1010 ‘WESTERN CAMPAIGNER’ was shipped to a specialist engineering firm for disassembly on Tuesday 25th January 2022. The transportation cost was very kindly sponsored by West Country firm WRINGS TRANSPORT and we are very grateful for their help. Photo by Terry Deacon © CC BY-NC 3.0

Headlining this week is the long-awaited move of the torque converter rail from the transmission of Class 52 D1010 ‘WESTERN CAMPAIGNER’ which has now been delivered to a specialist engineering firm for disassembly. This is a major step forward in the resolution of an issue that occurred during the first day of the 2018 Diesel Gala when the ‘B’ end transmission seized and the loco had to be withdrawn from service.

The transfer of power from the diesel engine to the wheels of a diesel-hydraulic locomotive is handled by the transmission, which in the case of the Class 52 ‘Westerns’, comprises three torque converters (a specialised form of a turbine), each intended for use during a different speed range. The three converters are attached to a hollow shaft that revolves around the central shaft, the whole assembly involving eight bearings and their associated fluid seals, each of which has to be removed, inspected and replaced if necessary. 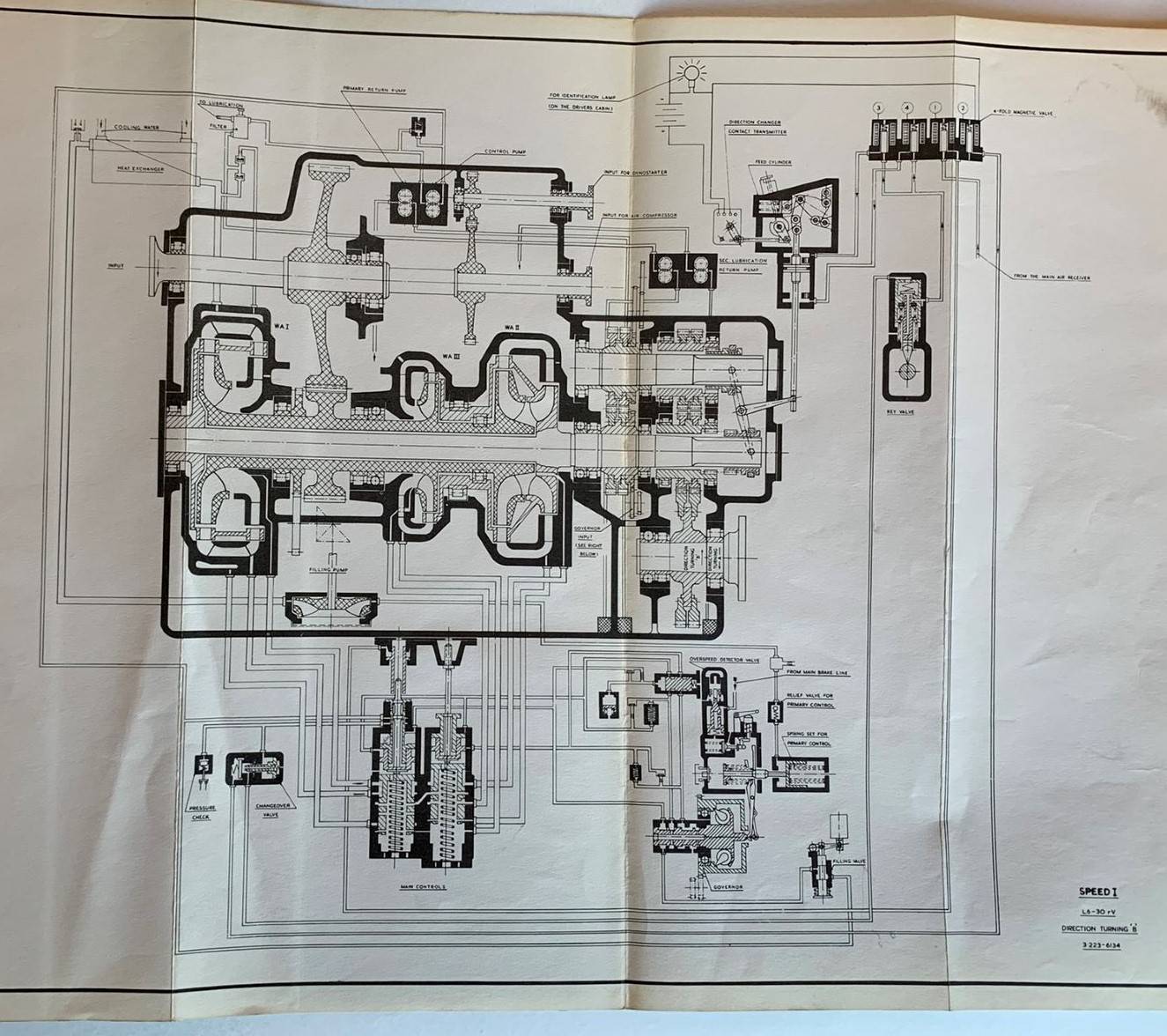 D1010 – cross-sectional drawing of the Voith L630rV three-stage hydraulic transmission, as used in the Class 52 ‘Westerns’. This is a photograph of a Voith drawing dating back to 1962.

Although the use of hydraulic transmissions on mainline locos was discontinued by British Railways in the 1970s, this form of transmission has lived on in all of the second generation diesel-multiple-units (DMUs) such as Sprinters, Super Sprinters and Turbostars, where the original claims of low weight and high reliability have been fully proven, with many thousands of such transmissions in daily service around the world.

Following disassembly, the parts from D1010’s transmission will be returned to Williton for each of the separate parts to be cleaned, inspected and measured. Then, the spare parts will be ordered and upon receipt of the parts, the whole kit will go back to the subcontractor for assembly. This process is likely to take 6 to 9 months, during which time we will continue to progress with other aspects of the loco restoration project. 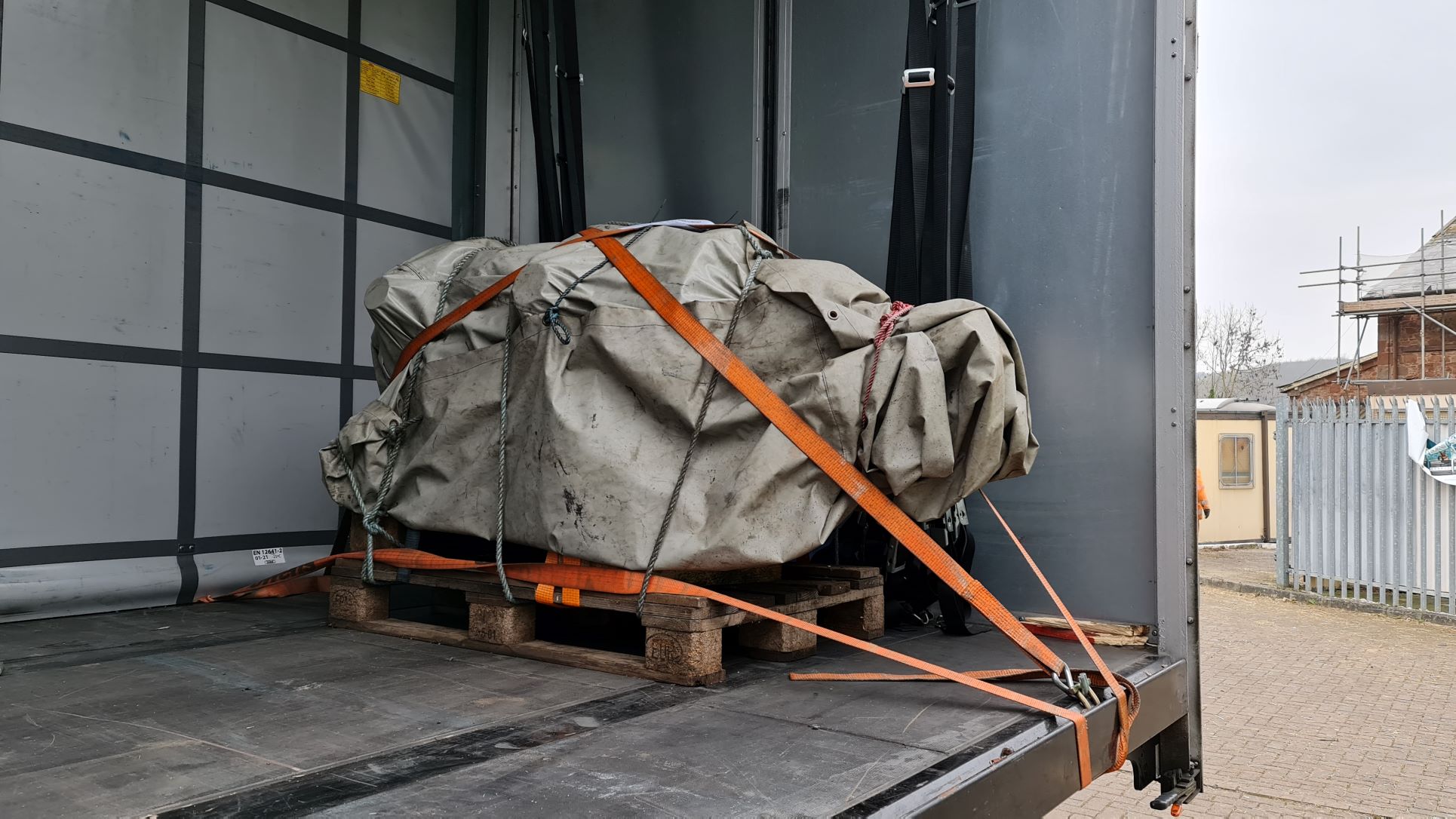 We are very grateful to all who donated and continue to donate towards the D1010 RESTORATION APPEAL and we would particularly like to thank WRINGS TRANSPORT for sponsoring this move. Thank you very much indeed !

VERY IMPORTANT DATES FOR YOUR DIARY – the WSR’s 2022 DIESEL GALA will take place from Thursday 9th through Saturday 11th June 2022, so keep these dates free and make a plan to attend ! Click this link to the WSR website to view the dates for other WSR events that are planned for 2022.

Class 52 D1010 ‘WESTERN CAMPAIGNER’ – we continue the steady drumbeat of progress on the bodywork of the locomotive, helped along by the flow of donations and the growing attendances at the depot, now open from Saturday through to Tuesday (most weeks). The old saying ‘many hands make light work’ is absolutely right. The following photographs tell the story: 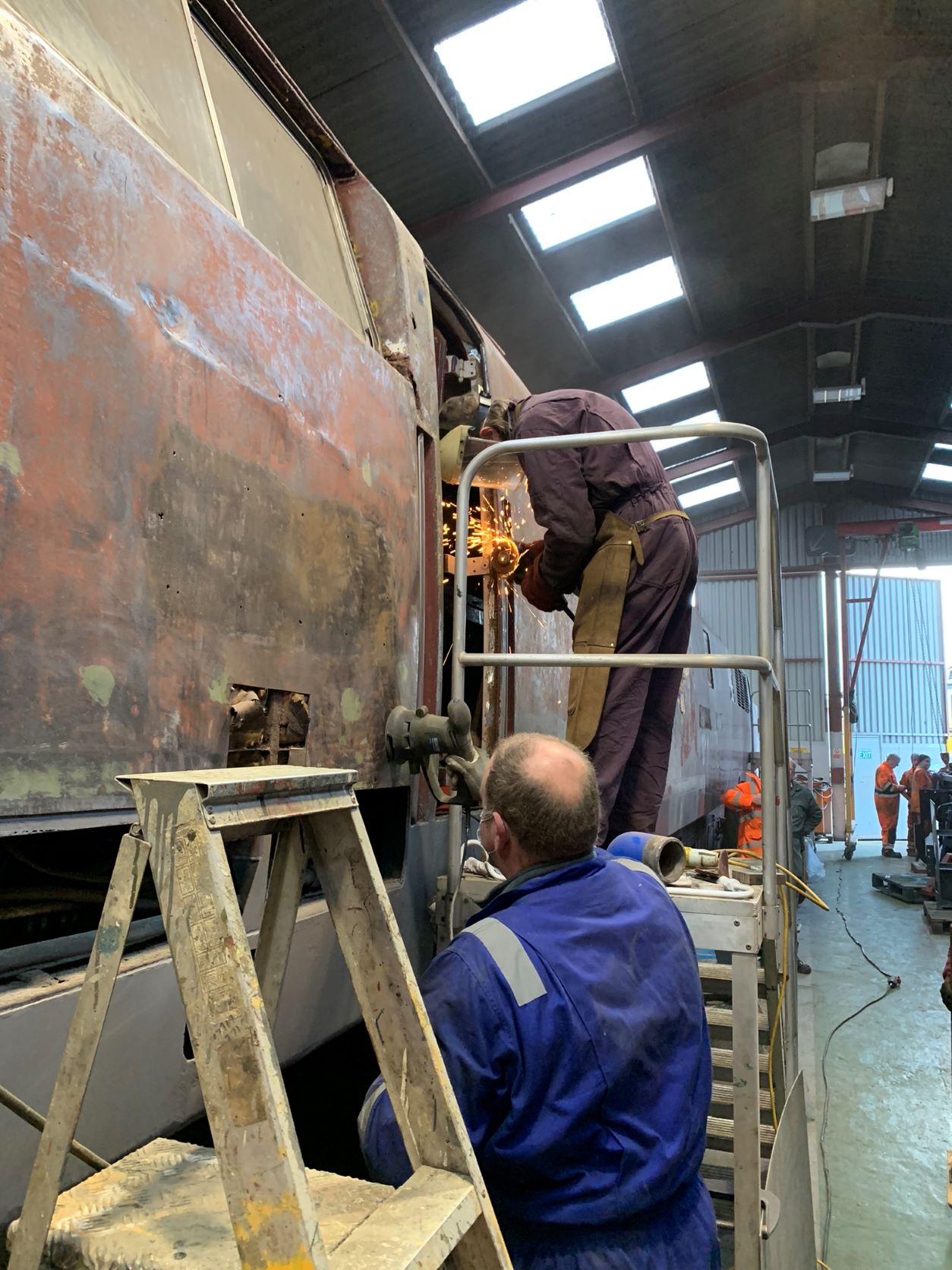 D1010 – Bob prepares the cab side for painting while Colin F works on installing the replacement door frame on the driver’s side of ‘B’ end cab at Williton on Saturday 29th January 2022. Photo by Andy Royal © CC BY-NC 3.0 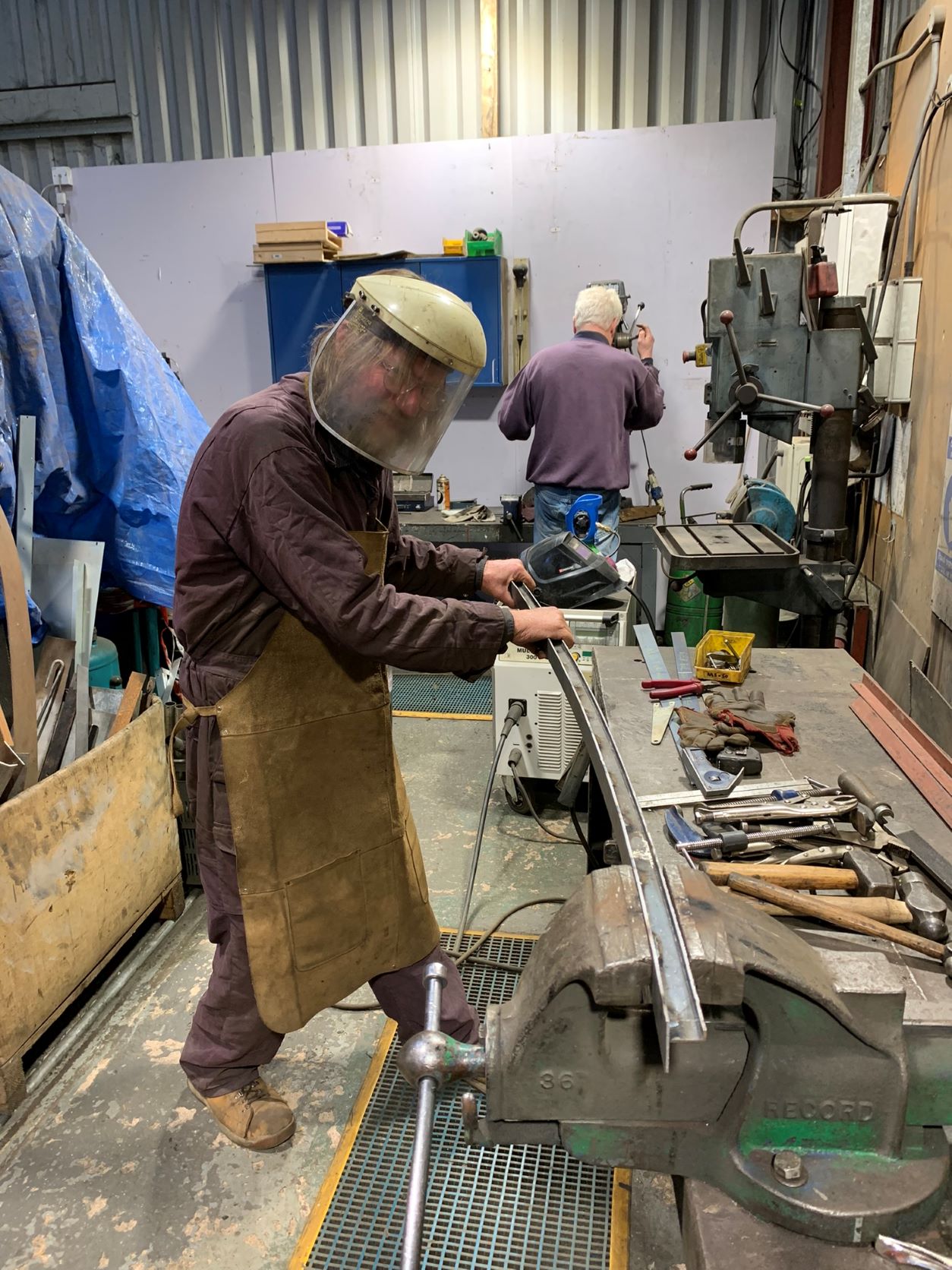 D1010 – the door frame had to be curved to match the profile of the side of the locomotive, so Colin F applied gentle force to create just the right amount of curve to ensure a good fit. Pictured at Williton on Saturday 29th January 2022 by Andy Royal © CC BY-NC 3.0 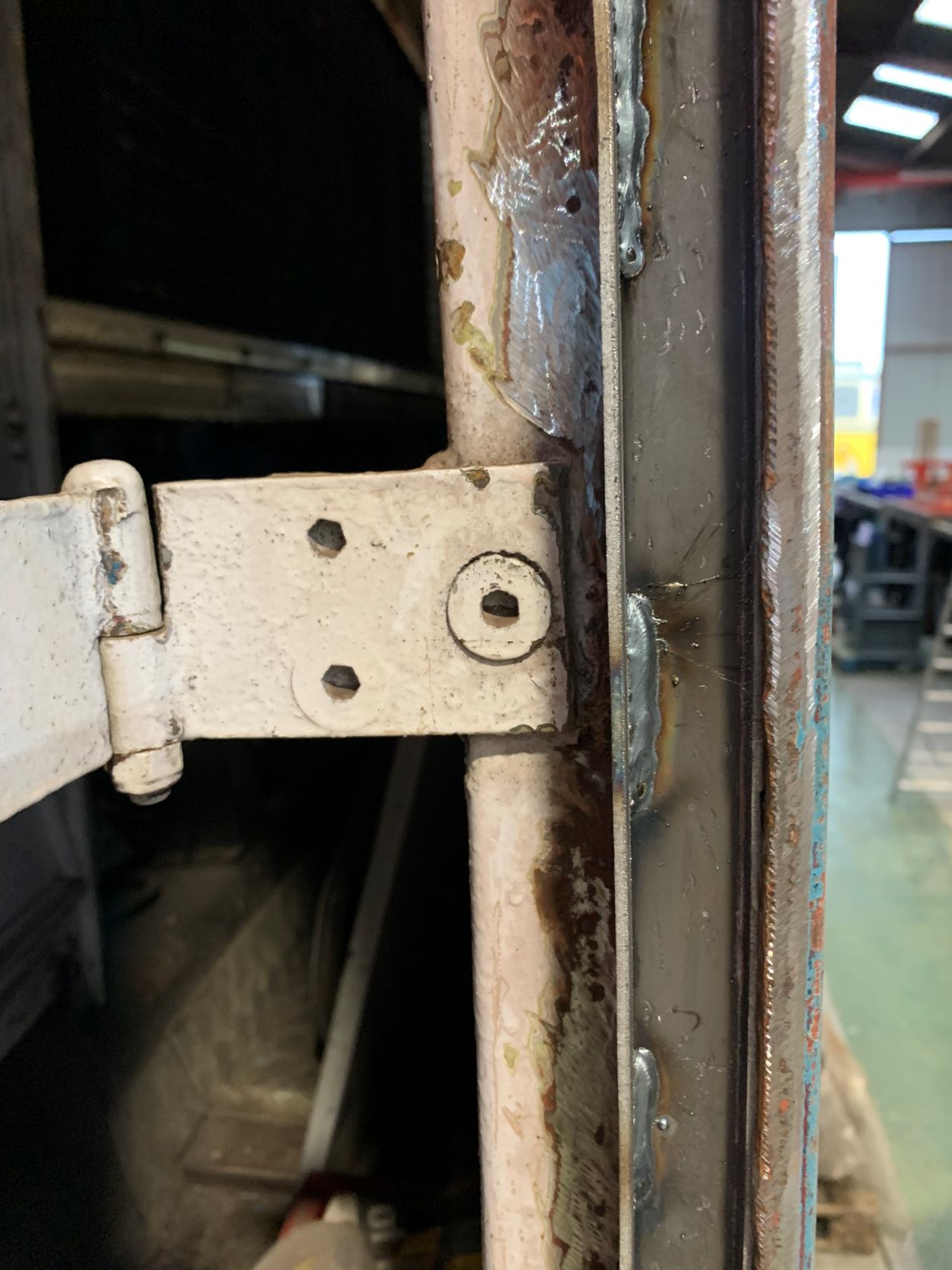 D1010 – the replacement door frame has now been fitted neatly into place and is ready for welding. Pictured at Williton on Saturday 29th January 2022 by Andy Royal © CC BY-NC 3.0 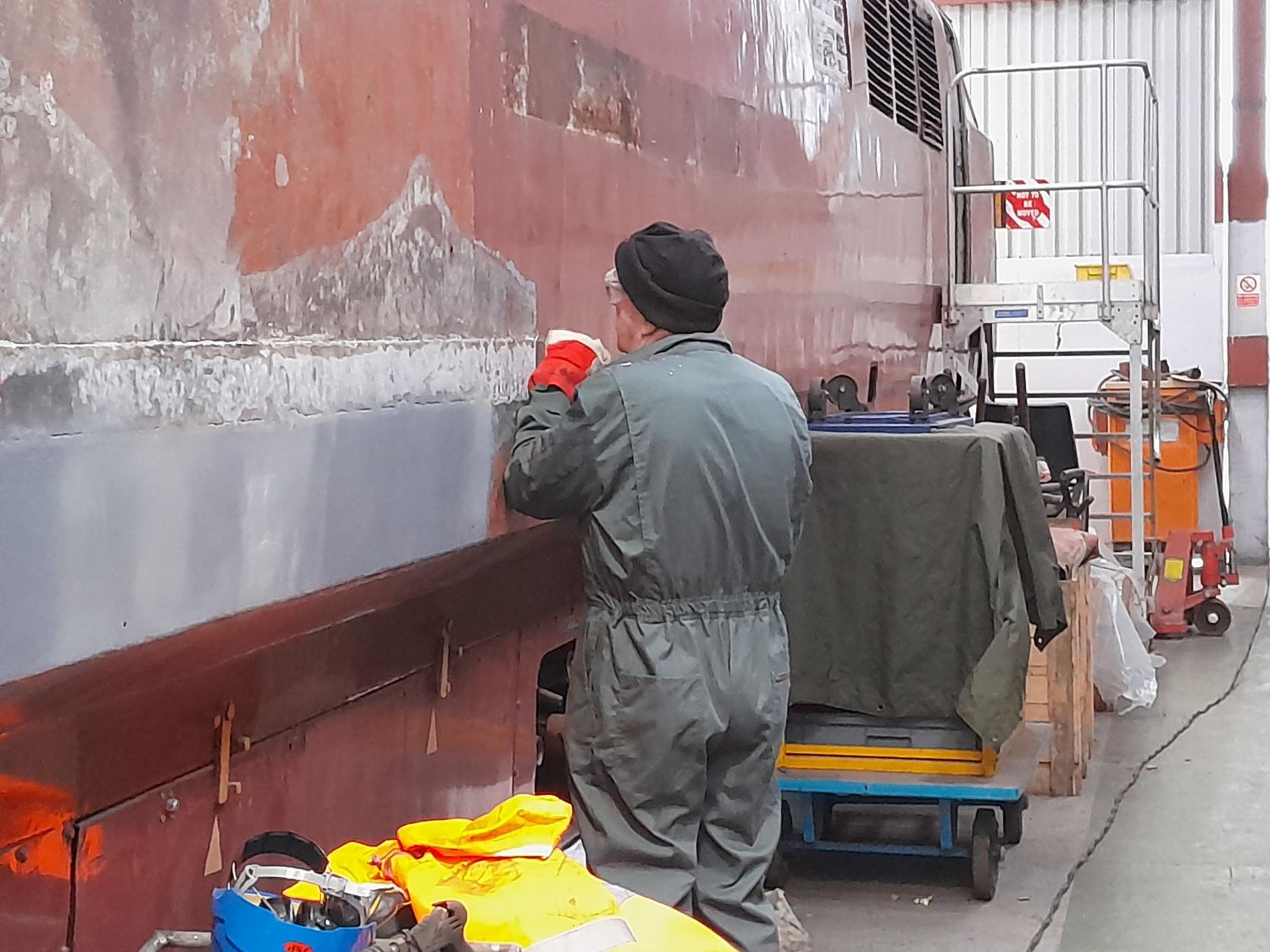 D1010 – the tedious process of removing the many layers of paint and filler continues along the side of the locomotive that carries the scars of a previous repair to damage that was incurred some time in 1972. Chris is pictured working on the loco at Williton on Saturday 29th January 2022 by Jon Tooke © CC BY-NC 3.0 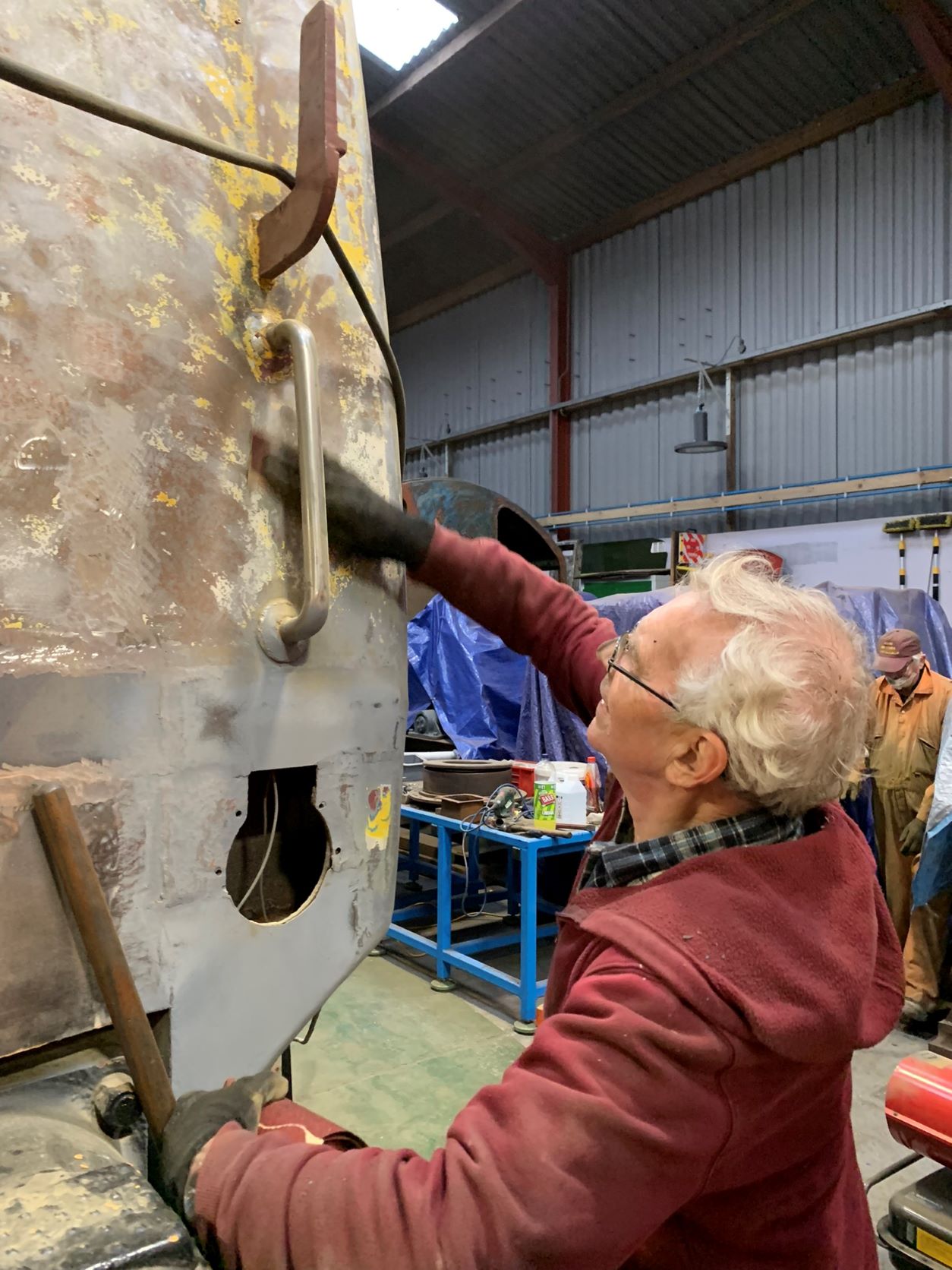 D1010 – the needle-gunned surface is too rough to be painted, so it first has to be sanded down. The handrails prevent the use of power tools, so Ian F uses sandpaper to make sure that the area behind the handrail does not get missed. Pictured at Williton on Saturday 29th January 2022 by Andy Royal © CC BY-NC 3.0 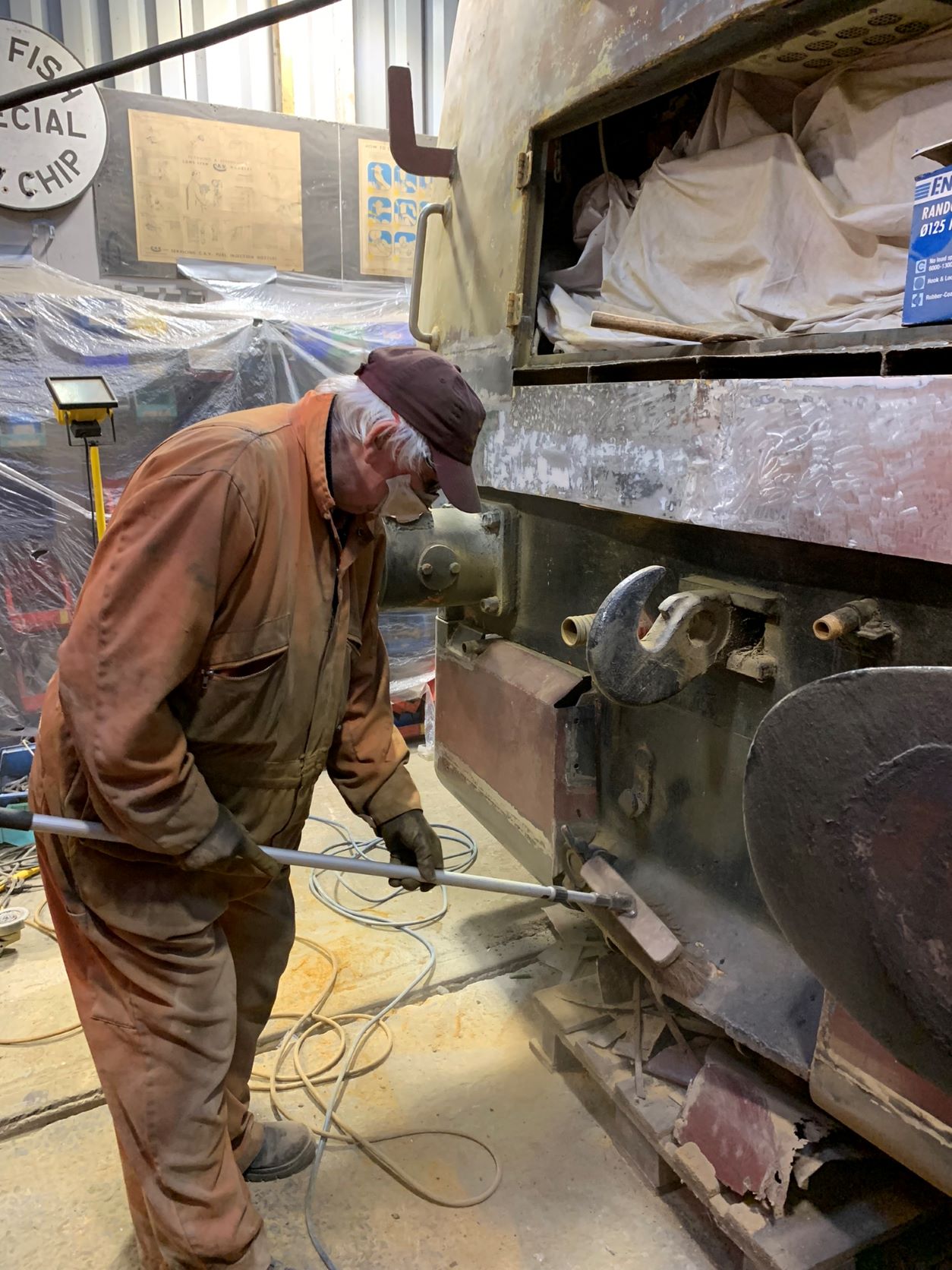 D1010 – after several hours of hard work with the power sander on the ‘face’ of the locomotive, Gordon gathers the evidence and tidies up at the end of the day. Pictured at Williton on Saturday 29th January 2022 by Andy Royal © CC BY-NC 3.0 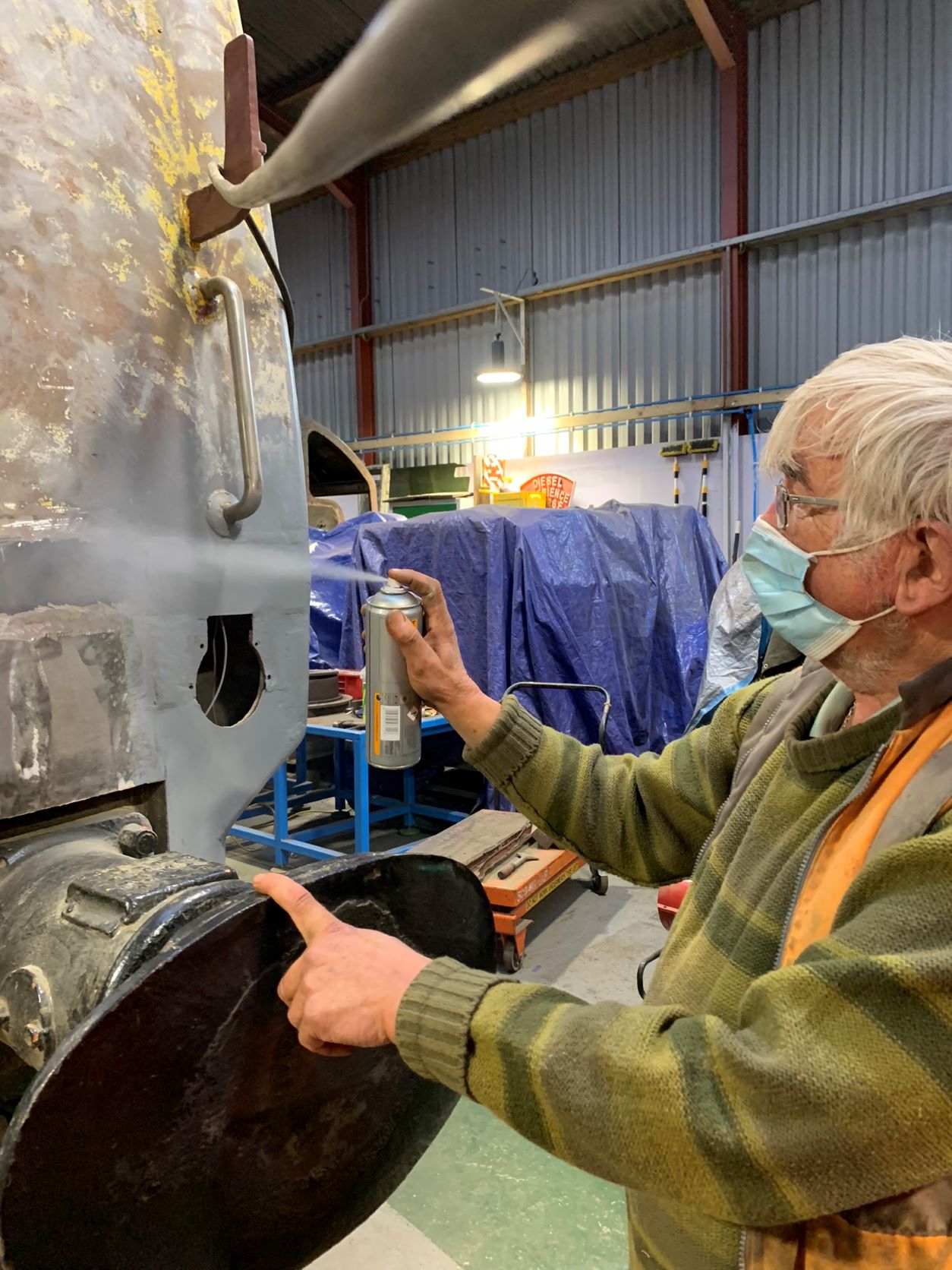 D1010 – to prevent a layer of rust forming on the newly-repaired bodywork, Roy applies a thin layer of primer as a temporary measure, in advance of the sanding, filling and priming that will need to be done as part of the locomotive repaint. Pictured at Williton on Saturday 29th January 2022 by Andy Royal © CC BY-NC 3.0

Class 33 D6566 (33 048) – this loco is at Williton undergoing some minor repairs and maintenance, while remaining fully serviceable. 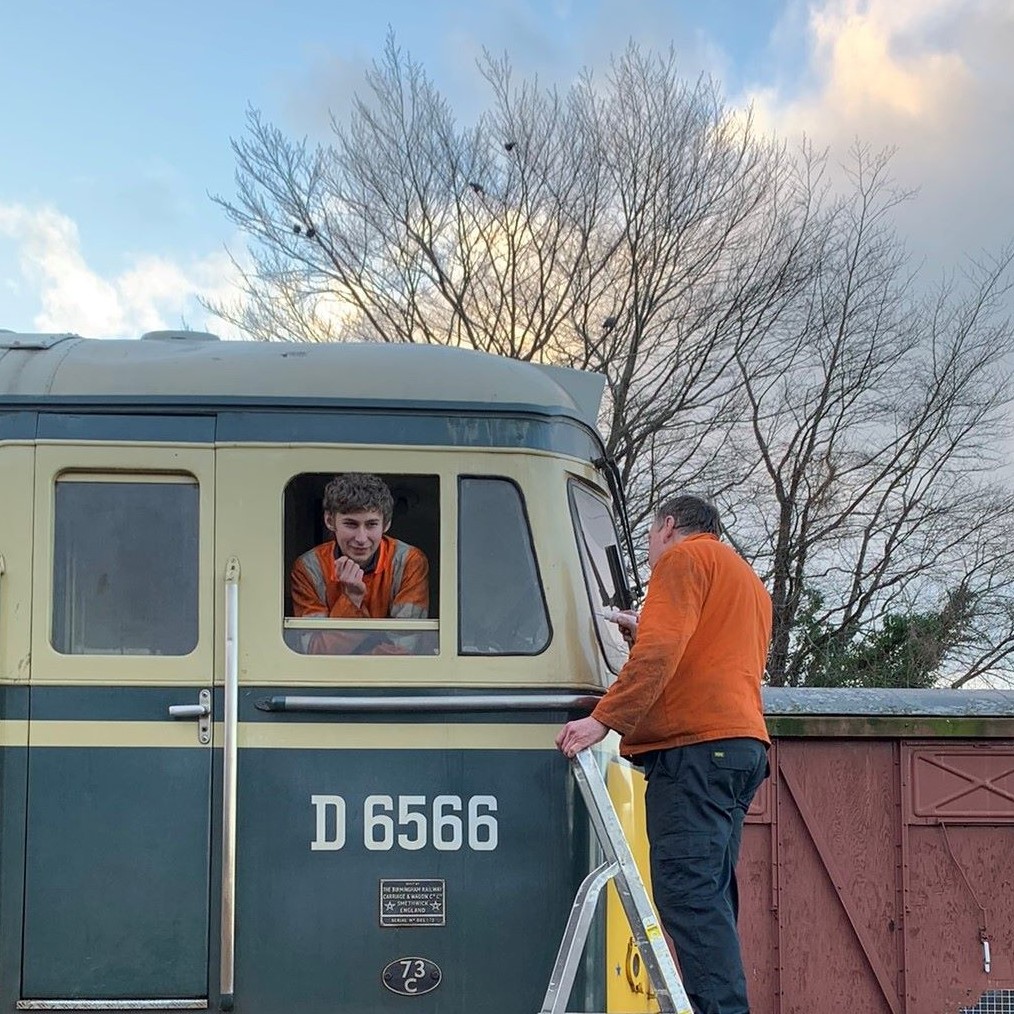 Class 35 ‘Hymek’ D7017 – Neil continued his work on the fitting of additional fuse protection into the electrical feed for the compressor and exhausters, which is a modification that has already been applied to sister loco D7018. This loco is waiting for its turn over the pit in the Swindon Shed so that her bogie suspension springs can be replaced.

Class 35 ‘Hymek’ D7018 – work resumed on the preparation for the removal of the transmission control block, which is a necessary step in the search for the issue that is preventing the automatic gear change from functioning properly. In the worst case, this loco will be ready for the DIESEL GALA from 9th to 11th JUNE and will operate while locked in second gear, as she did in 2021, but we hope that we will resolve the issue in time to allow normal operation.

Class 14 ‘Teddy Bear’ D9518 – another successful week with many more parts refitted to the loco frames, including some large pieces that have been taking up a lot of space in the loco shed while waiting their turn for re-attachment. This last weekend saw the re-fitting of the two sets of sandboxes and steps at the leading (longest) end of the locomotive, and the buffer beam received two coats of paint, first the primer and then the undercoat, which will be lightly sanded before applying further coats next week. Also, quietly and out of sight, John continued his work on the rebuilding of the electrical cubicle. Great progress indeed ! 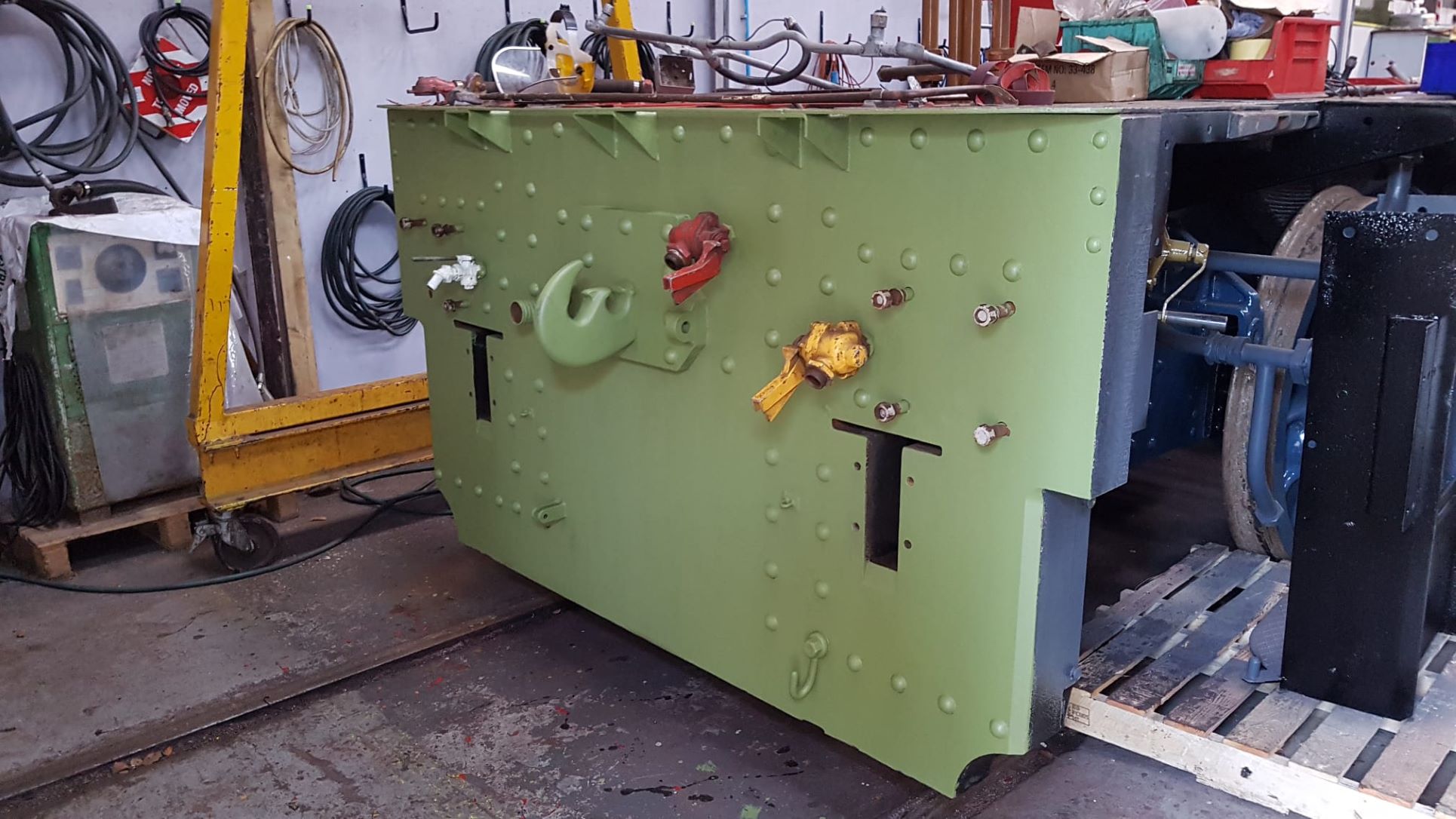 D9518’s bufferbeam at the leading end of the loco received a coat of green primer early in the morning of Saturday 29th January 2022, courtesy of Colin G. Pictured at Williton by Martin Howard © CC BY-NC 3.0 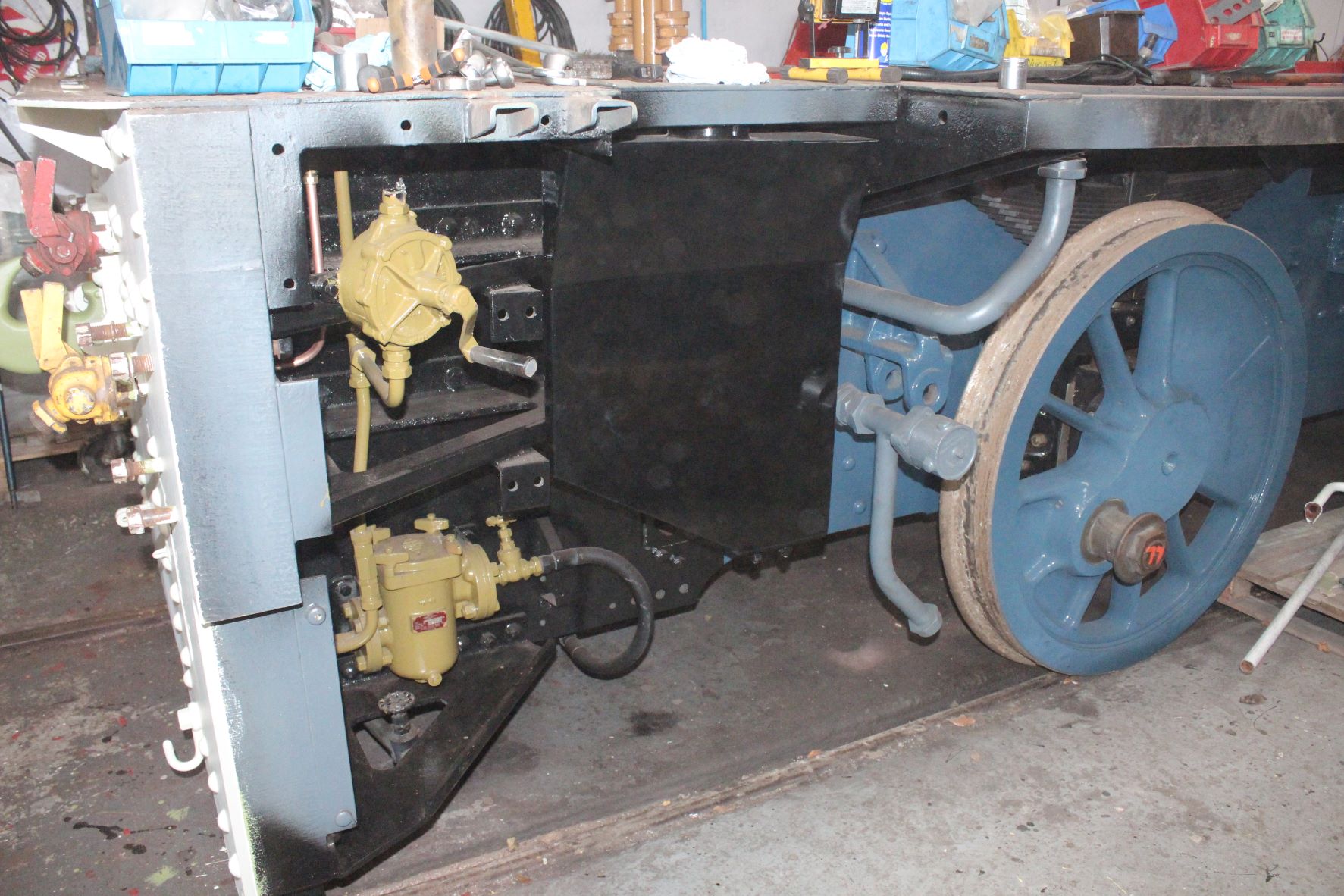 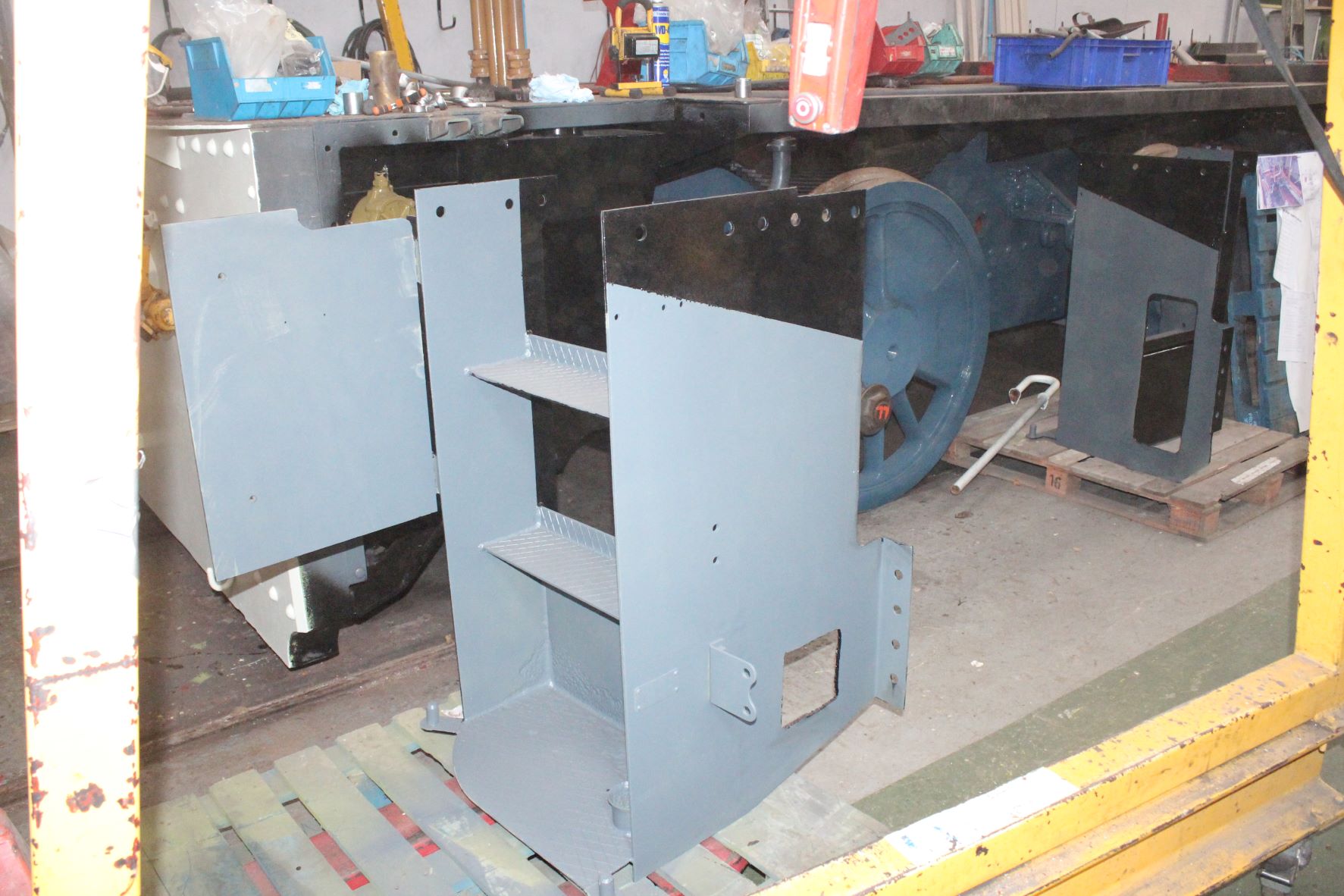 D9518 – the shunter’s steps at the leading end were prepared for re-installation (one on each side of the loco) at Williton on 29th January 2022. Note the hinged door that is attached to the left side of the steps – this will cover the emergency manual fuel pump that can be seen in the previous photograph. Photo by Terry Deacon © CC BY-NC 3.0 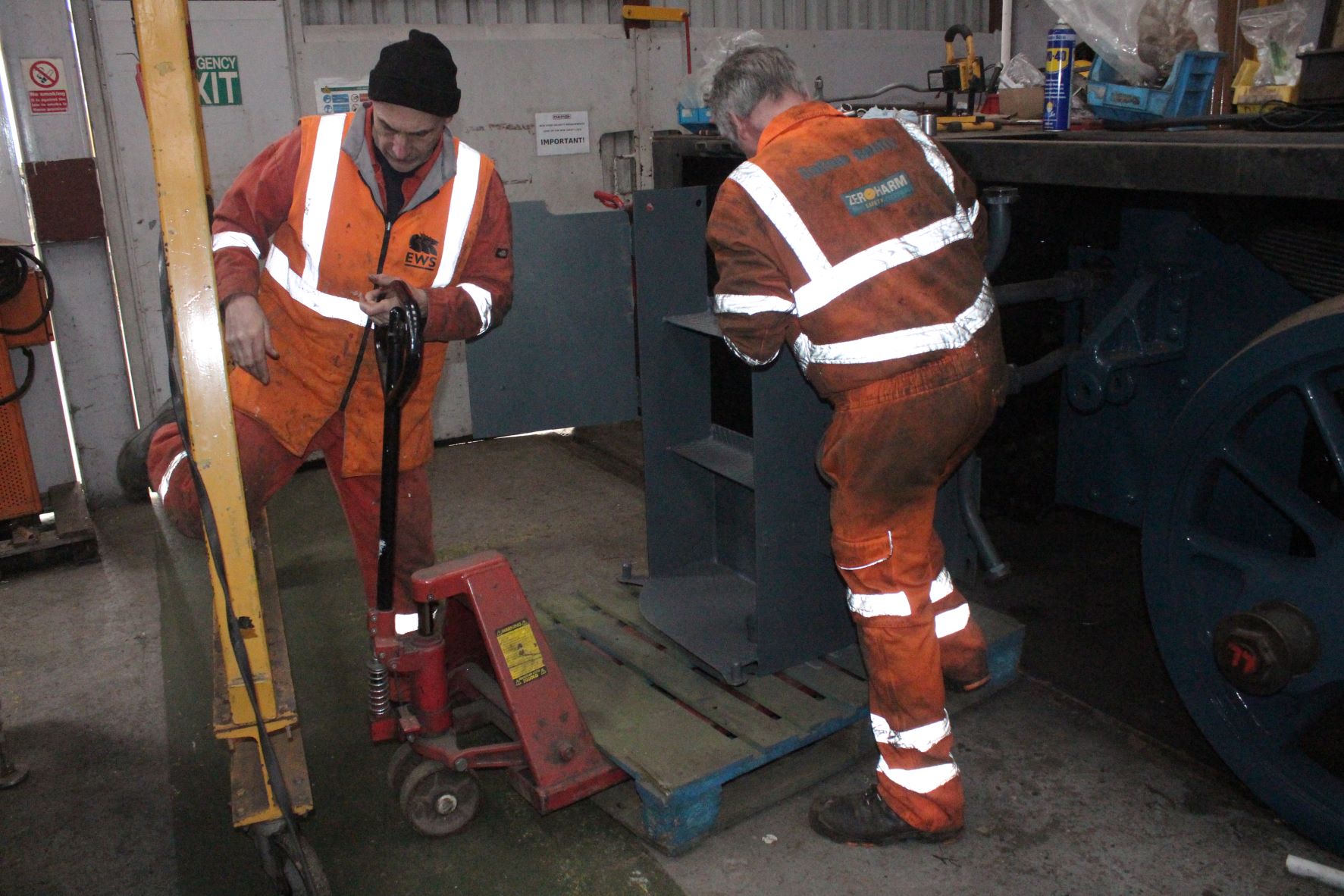 D9518 – the shunter’s steps at the leading end were re-installed (one on each side of the loco) by Colin G (left) and Simon with the aid of a pallet truck at Williton on 29th January 2022. Photo by Terry Deacon © CC BY-NC 3.0 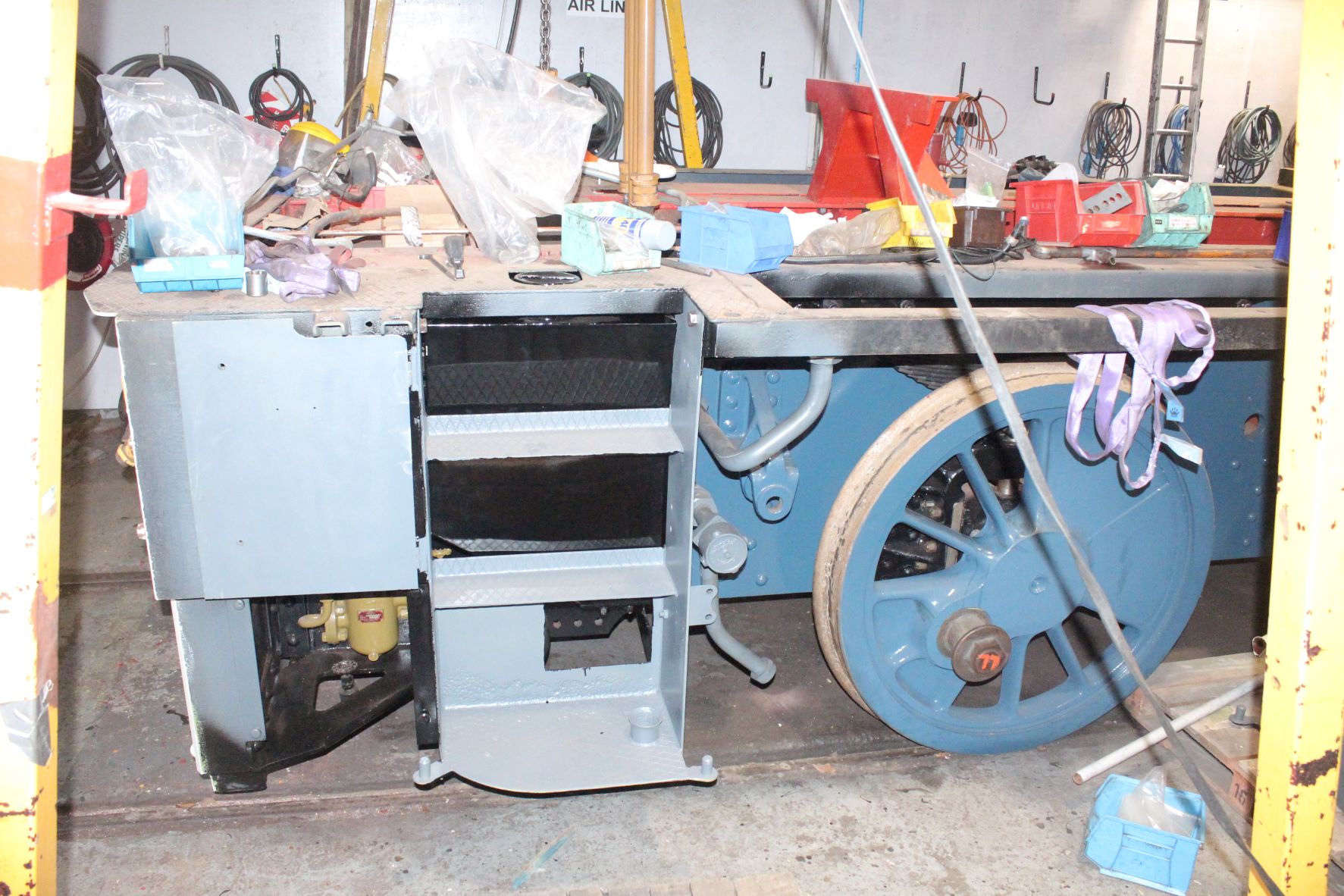 D9518 – the shunter’s steps, sandbox (behind the steps) and fuel pump door after re-installation at Williton on 29th January 2022. Photo by Terry Deacon © CC BY-NC 3.0 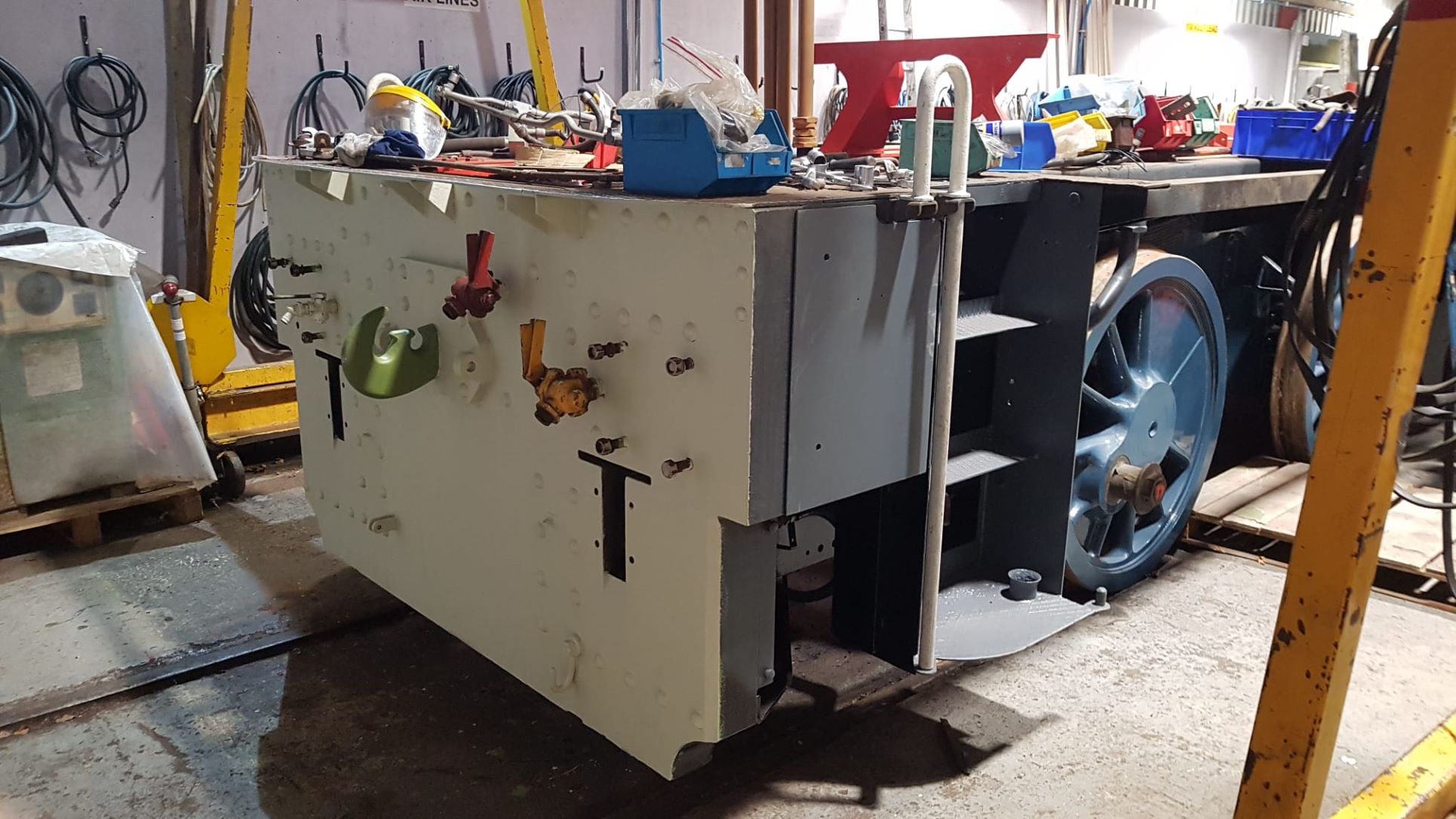 D9518’s bufferbeam at the leading end of the loco after receiving a coat of grey undercoat, pictured late in the day at Williton on Saturday 29th January 2022, with the steps, sandbox and door re-installed and also with one of the white handrails fitted. Photo by Martin Howard © CC BY-NC 3.0

The constant progress on this loco project has been made possible by the efforts of volunteers and the donations of the many ‘Teddy Bear’ supporters who have contributed to the D9518 Restoration Appeal. Thank you all very much !

Class 14 ‘Teddy Bear’ D9526 – this loco is currently based at the Kent & East Sussex Railway and will remain at the K&ESR until May 2022, by which time her older sister D9504 should have completed her heavy overhaul and be returned to traffic. We look forward to seeing D9526 back at Williton in time for the WSR’s 2022 Diesel Gala that takes place from Thursday 9th through Saturday 11th June 2022.

Andrew Barclay 0-4-0DH 578 – this loco is currently in the Swindon Shed at Williton receiving attention from the WSR Restorations team who are performing a partial repaint that will then allow the loco to be stabled in the yard for the rest of the winter.