On Saturday 23rd April, the DEPG EASTER RAFFLE DRAW took place from the cab of Class 52 D1010 ‘WESTERN CAMPAIGNER’ in the loco shed at Williton, and the prizes were awarded to the four lucky winners. The raffle, the first to be conducted by the DEPG for as long as anyone can remember, raised £2210 with the net proceeds of £1976 including donations that was then split between the two restoration appeals for D1010 and D9518, therefore making a significant contribution to those funds. THANK YOU VERY MUCH to all who bought a ticket and congratulations to the four lucky winners. Many thanks to DEPG Publicity Officer Mark Bladwell for organising the raffle. 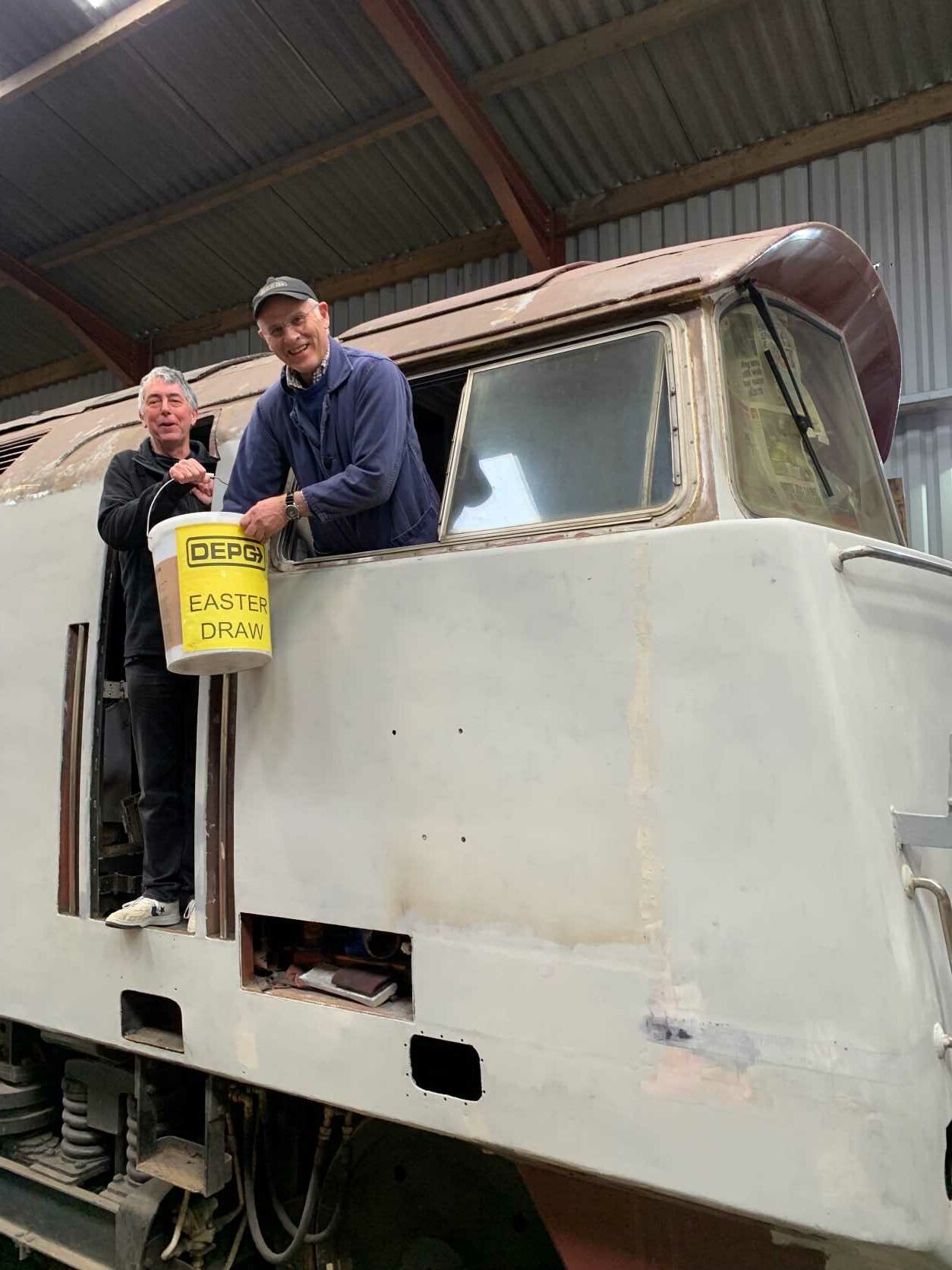 Class 52 D1010 ‘WESTERN CAMPAIGNER’ in grey primer provided the ‘stage’ for the DEPG EASTER RAFFLE DRAW on Saturday 23rd April 2022, with DEPG Chairman Martin Howard picking the winners as DEPG Publicity Officer and raffle organiser Mark Bladwell held the tub of tickets. The draw raised £1136 for the D1010 restoration appeal and £840 for the D9518 restoration appeal. A BIG THANK YOU to all who bought a ticket ! Photo by Andy Royal © CC BY-NC 3.0

MORE VERY IMPORTANT DATES FOR YOUR DIARY – the WSR’s 2022 DIESEL GALA will take place from Thursday 9th through Saturday 11th June 2022, so keep these dates free and make a plan to attend ! Click this link to the WSR website to view the dates for other WSR events that are planned for 2022. We will be opening our depot to the public on these special event days.

Class 52 D1010 ‘WESTERN CAMPAIGNER’ – our CAMPAIGN for CAMPAIGNER took a very useful boost from the EASTER RAFFLE last week, and donations and sponsorships continue to arrive in support of the restoration of this much-loved locomotive. Click on the images below for an update of fundraising status or to make a donation:

On Saturday 23rd, Ian F and Chris continued their work on preparing the bodyside for painting. This is a massive task so we applaud their diligence as they gradually move along the loco, sanding, filling, sanding and painting. The results are already clear to see from the previous pictures, the loco gradually losing her faded maroon livery in favour of an all-over (temporary) coating of grey primer. Well done guys !

Major progress was made on the Voith L630rV transmission last Saturday as we welcomed Paul Koch and Andy Venn to Williton to continue their work on the disassembly of the turbine rail. The following photos tell the story: 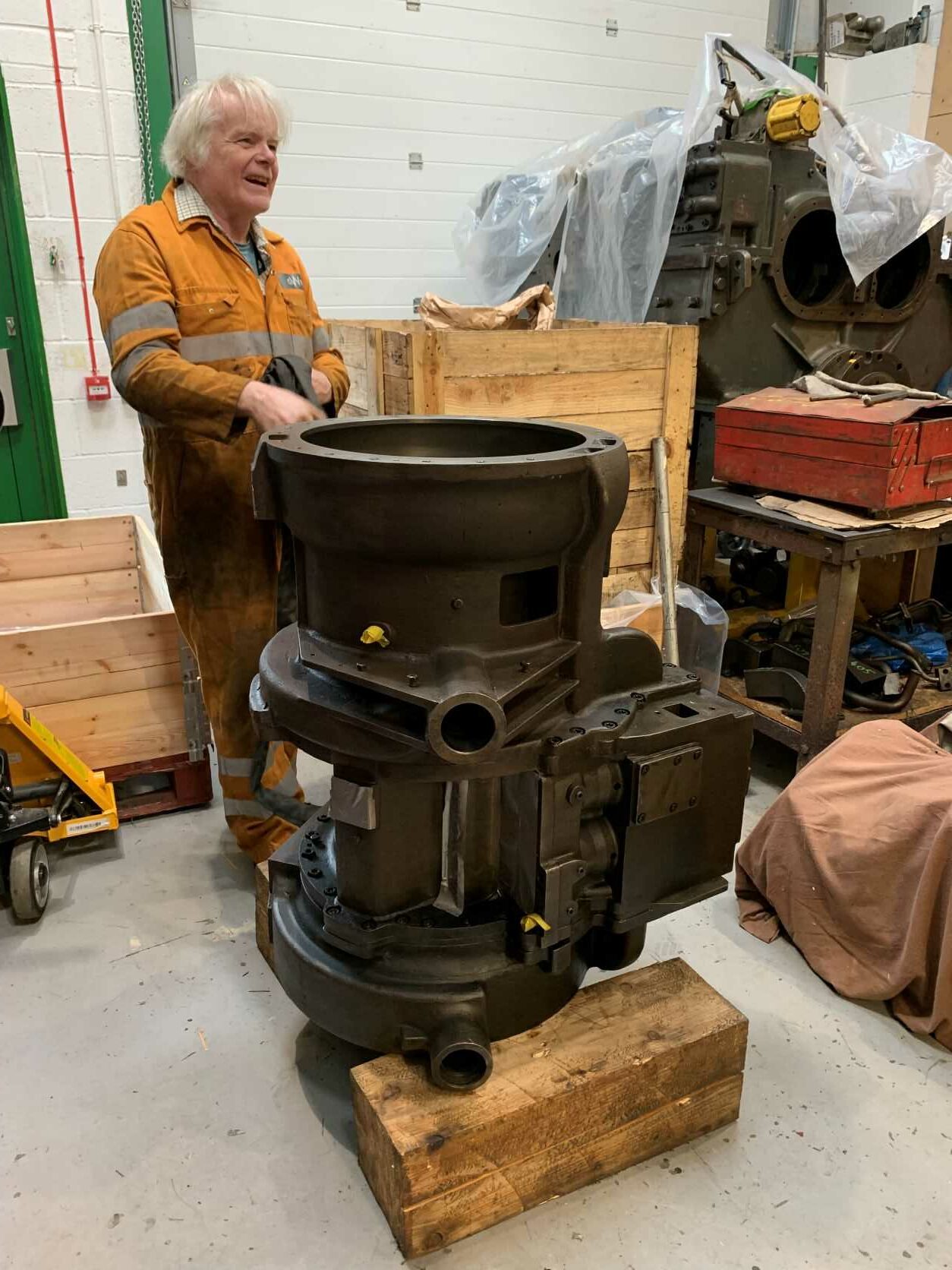 D1010 – the turbine rail from the ‘B’ transmission was subjected to further dismantling at Williton on Saturday 23rd April 2022. The picture shows DEPG member and transmission expert Andy Venn alongside the assembly which has been stood on its end to allow the two parts of the cast steel housing to be separated. The first stage (first or bottom gear) torque converter fluid port can be seen resting on the wood block, above which is the third stage (third gear) fluid port. The second stage (second gear) section has already been removed. Photo by Andy Royal © CC BY-NC 3.0 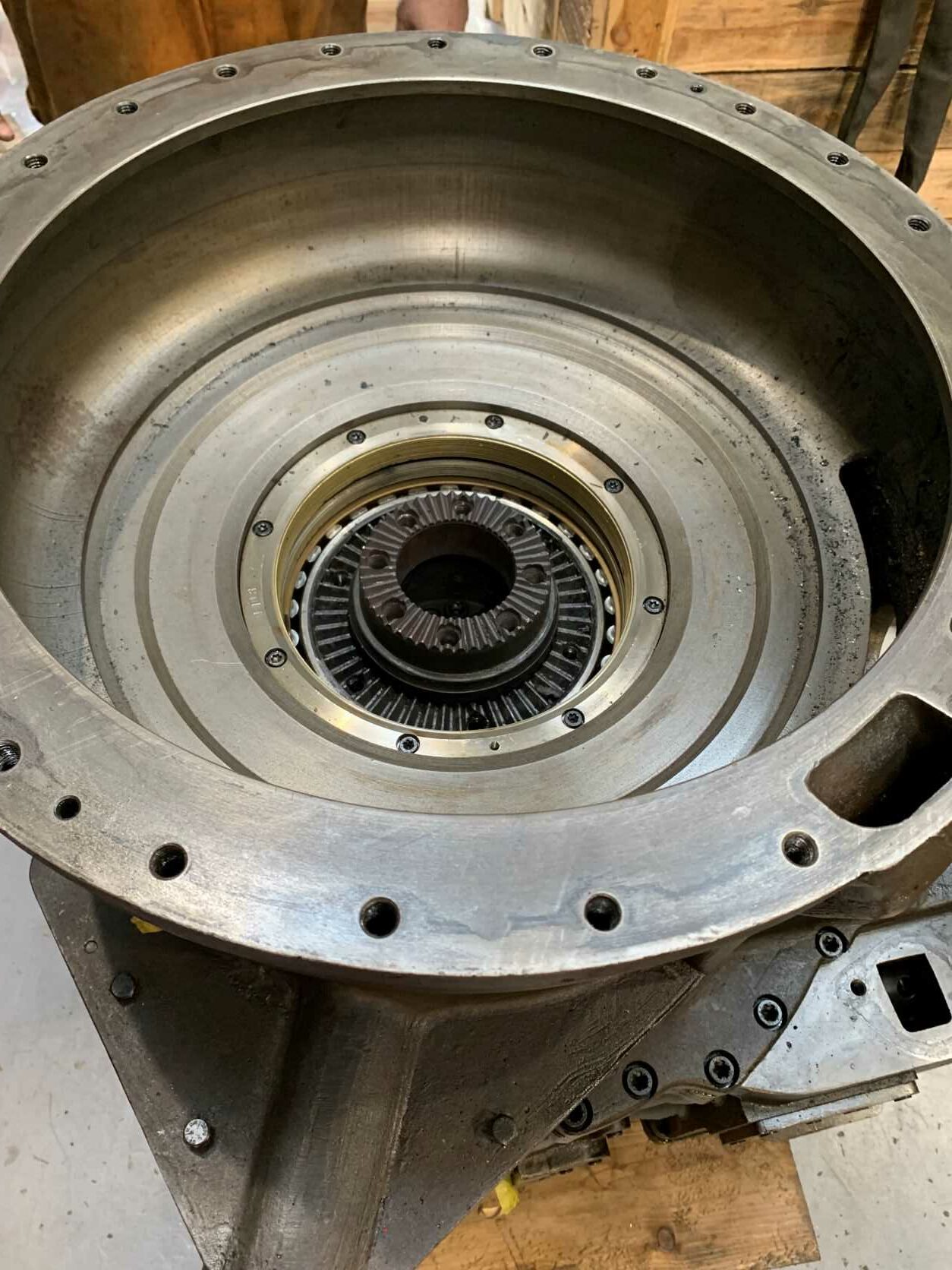 D1010 – looking down into the housing of the second stage turbine before separating the housing to reveal the third stage, the debris from the failed bearing can be seen all over the surface, especially towards the right hand side of the picture. This debris has to be carefully removed before the assembly can be fitted back together with new bearings (and new labyrinth seals where appropriate). Photo by Andy Royal © CC BY-NC 3.0 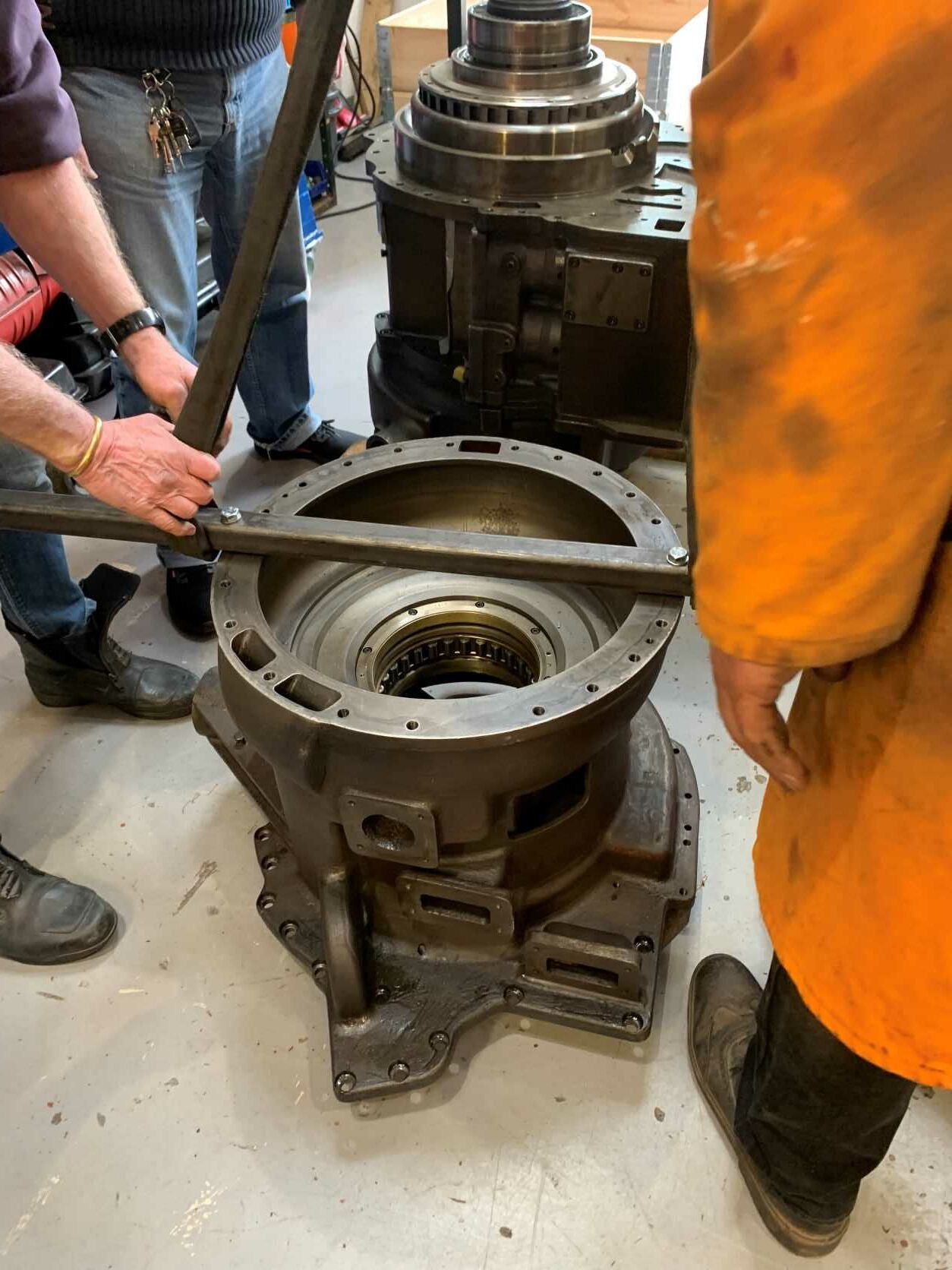 D1010 – with another large cast steel section removed, the third stage (third or top gear) torque converter has now been exposed in the background. Other than the expected debris around the bearings and seals caused by the failure of bearing 3-152, the rest of this assembly appears to be as expected, which is good news for the restoration programme. Photo by Andy Royal © CC BY-NC 3.0 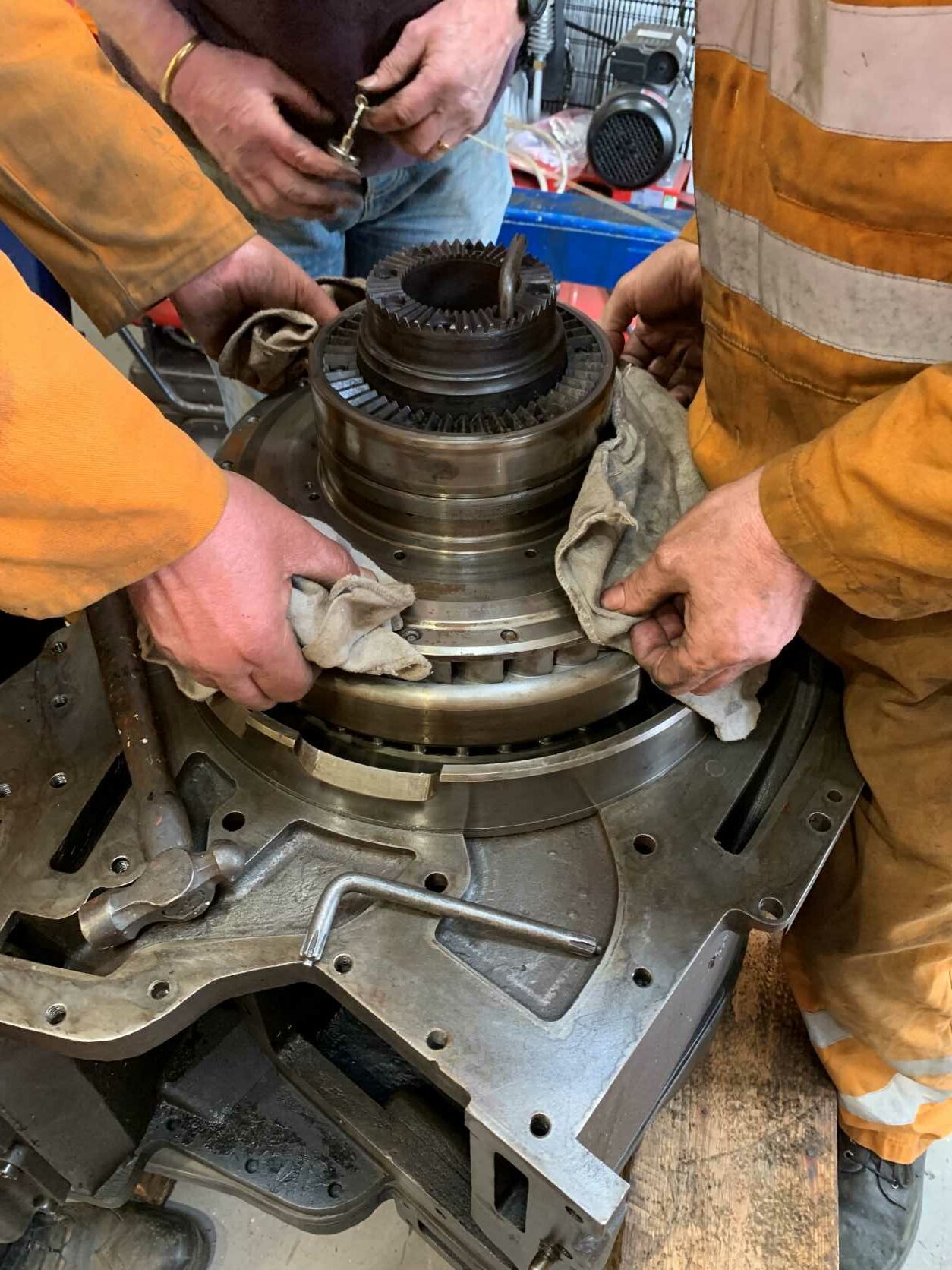 D1010 – after a struggle with some very tight bolts, the third stage turbine runner appears to be ready to be lifted off in the careful hands of Paul Koch (left) and Andy Venn (right), but the runner did not want to separate so it will be tackled again in the near future. At this point along the turbine rail, there are three concentric shafts rotating at two different speeds – the centre shaft is missing in this view, but of the two radially-toothed surfaces (Hirth joints), the smaller diameter is the input that rotates according to engine speed and the larger diameter is the output that rotates according to the road speed. Photo by Andy Royal © CC BY-NC 3.0

For the sum of £25, this scheme offers you a chance to sponsor the restoration of this much-loved locomotive, with your personal contribution being recorded and documented on a set of drawings that will be made available at our Williton depot on running days and open days. For those who prefer to remain anonymous, a unique reference number will be allocated and engraved instead. 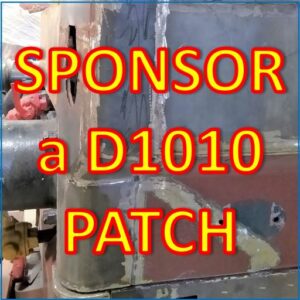 NOTE: EVERYONE WHO HAS ALREADY DONATED £25 OR MORE SINCE JULY 2021 WILL BE RECOGNISED and will be allocated an appropriate area on one of the patches or parts that have already been applied to the loco. Donations of smaller sums that accumulate to £25 are also eligible, so donate what you can when you can, and we will keep track of your total donations. Use our CONTACT FORM if you want to register your previous donations to D1010 for this campaign.

Class 33 D6566 (33 048) – this loco is based at Bishops Lydeard and is available to the WSR for contract work or ‘Thunderbird’ work as required. We understand that one of the ‘Cromptons’ will be rostered for some of the diesel turns under the blue timetable in May, and we will send out a DIESELGEN bulletin when the rosters have been finalised.

Class 33 D6575 (33 057) – this loco is the WSR duty loco and is currently based at Bishops Lydeard. Last Sunday 24th April, the ‘QUANTOCK BELLE’ dining train was in use and was steam hauled, so the 1230 Bishops Lydeard to Minehead and return was rostered for diesel haulage, and D6575 was back in action. On the return leg, the former Southern Region ‘Parcels and Miscellaneous Van’ (PMV) was attached so that it could be taken to Bishops Lydeard and used for a photographic charter that ran on Monday 25th April. 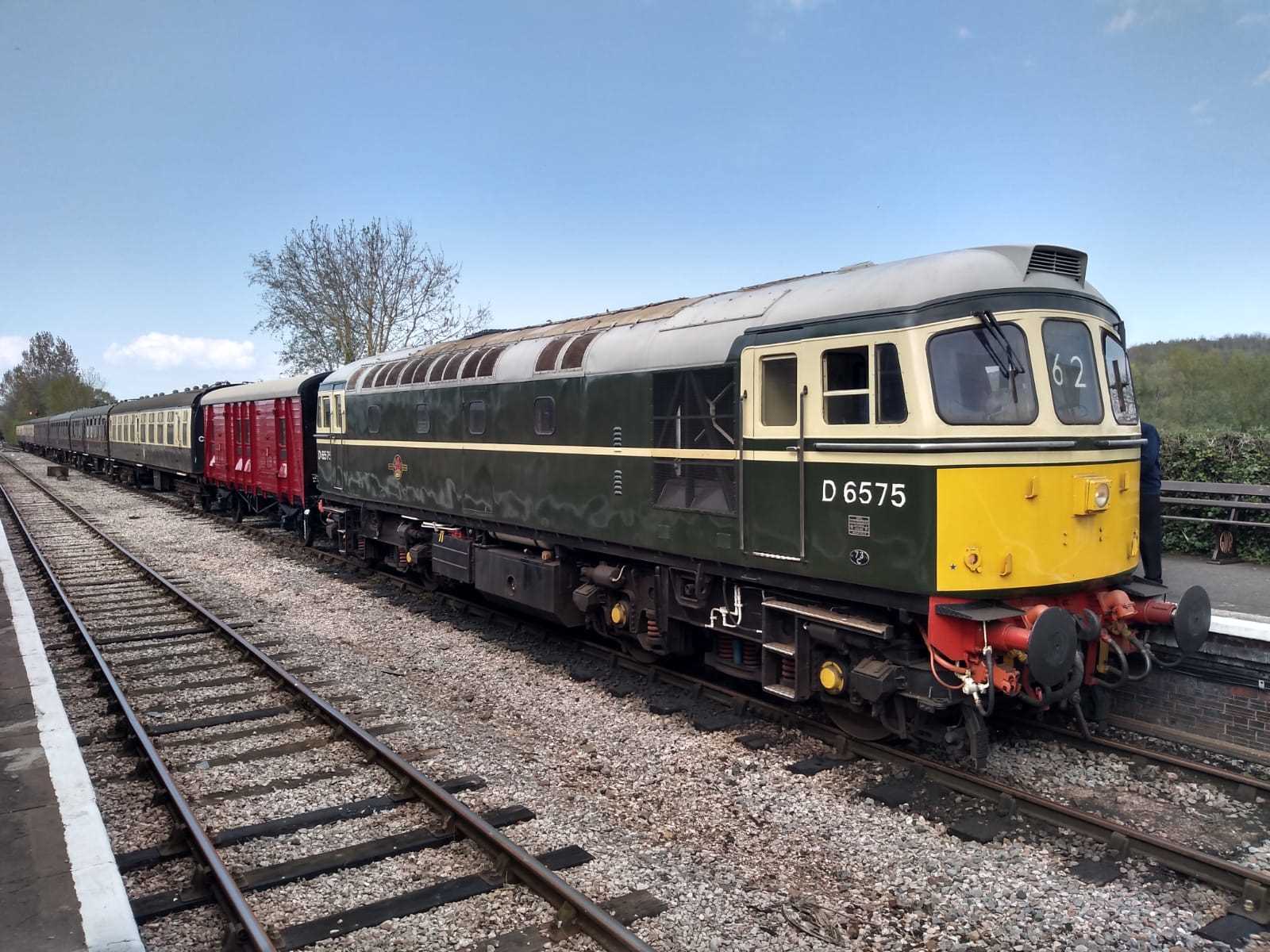 BRCW Class 33 ‘Crompton’ D6575 (33 057) worked the 1230 Bishops Lydeard to Minehead and return on Sunday 24th April 2022 and was pictured at Williton on the return leg with ex-SR ‘PMV’ in the consist. The recently-restored ‘PMV’ was moving to Bishops Lydeard so that it could participate in a photographic charter the following day. Photo by Ian Robins © CC BY-NC 3.0

Class 35 ‘Hymek’ D7017 – this loco is now receiving attention for a fairly short list of tasks that need to be dealt with before she can be returned to service. One task that was completed last Monday was the repainting of the bogies after all of the work that took place in March. The plan is to get the loco into a presentable external condition in time for the Diesel Gala that takes place between 9th and 11th June. 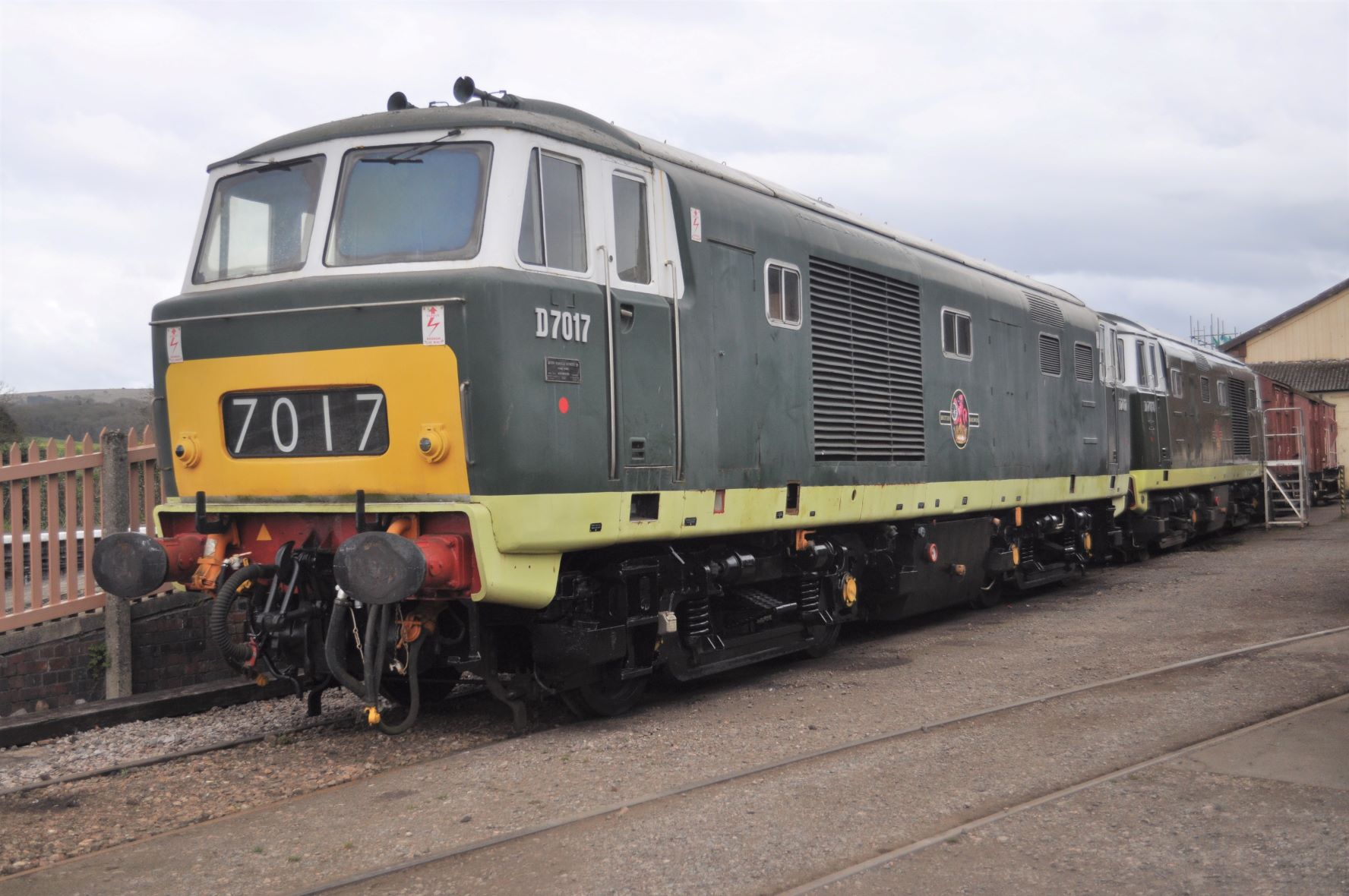 Class 35 ‘Hymek’ D7017 was pictured at Williton on Monday 18th April 2022 after receiving a coat of black paint to tidy up her bogies after the spring replacement work. Photo by Graham Perry © CC BY-NC 3.0 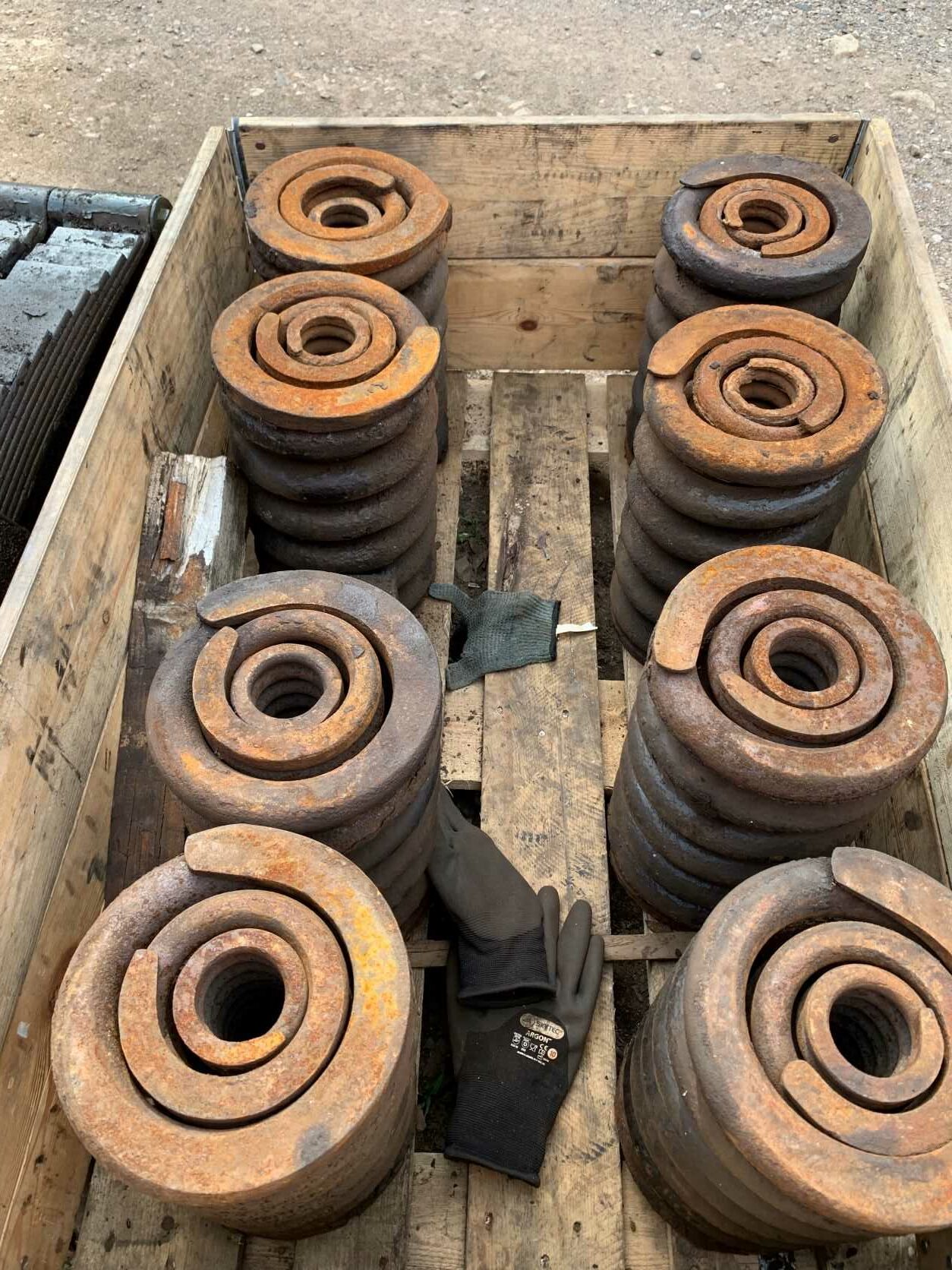 Class 35 ‘Hymek’ D7017 now has a complete new set of helical springs, so her old springs are available for sale to collectors of such parts. It is important to note that these parts saw service with BR in the 1970s and have been supporting the loco throughout her 47 years in preservation. Send an email to contact@depg.org if you are interested in acquring one or more of these sets of springs. Photo by Andy Royal © CC BY-NC 3.0 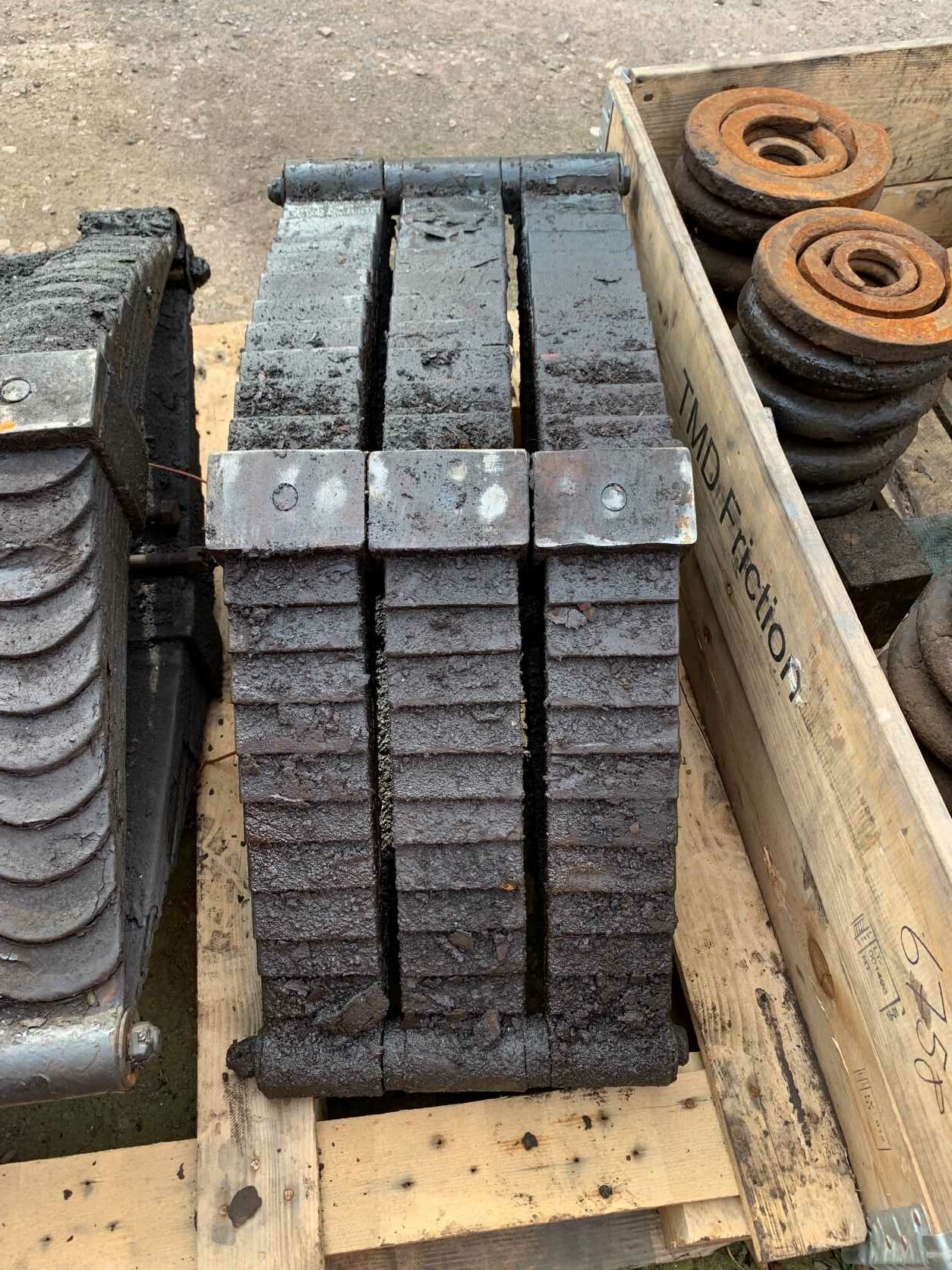 Class 35 ‘Hymek’ D7017’s old elliptical springs are also available for sale to collectors of such parts. It is important to note that one of these parts saw service with BR in the 1970s and has been supporting the loco throughout her 47 years in preservation. Send an email to contact@depg.org if you are interested in acquring one or more of these sets of springs. Photo by Andy Royal © CC BY-NC 3.0

Class 14 ‘Teddy Bear’ D9518 – after the major move-around of the previous weekend, work has continued on refitting of parts to the frames. The trim panels that are used to dress each corner of the loco were refitted on Tuesday 15th April, and preparations were made to reinstall the generator, to be followed by the brake frame. 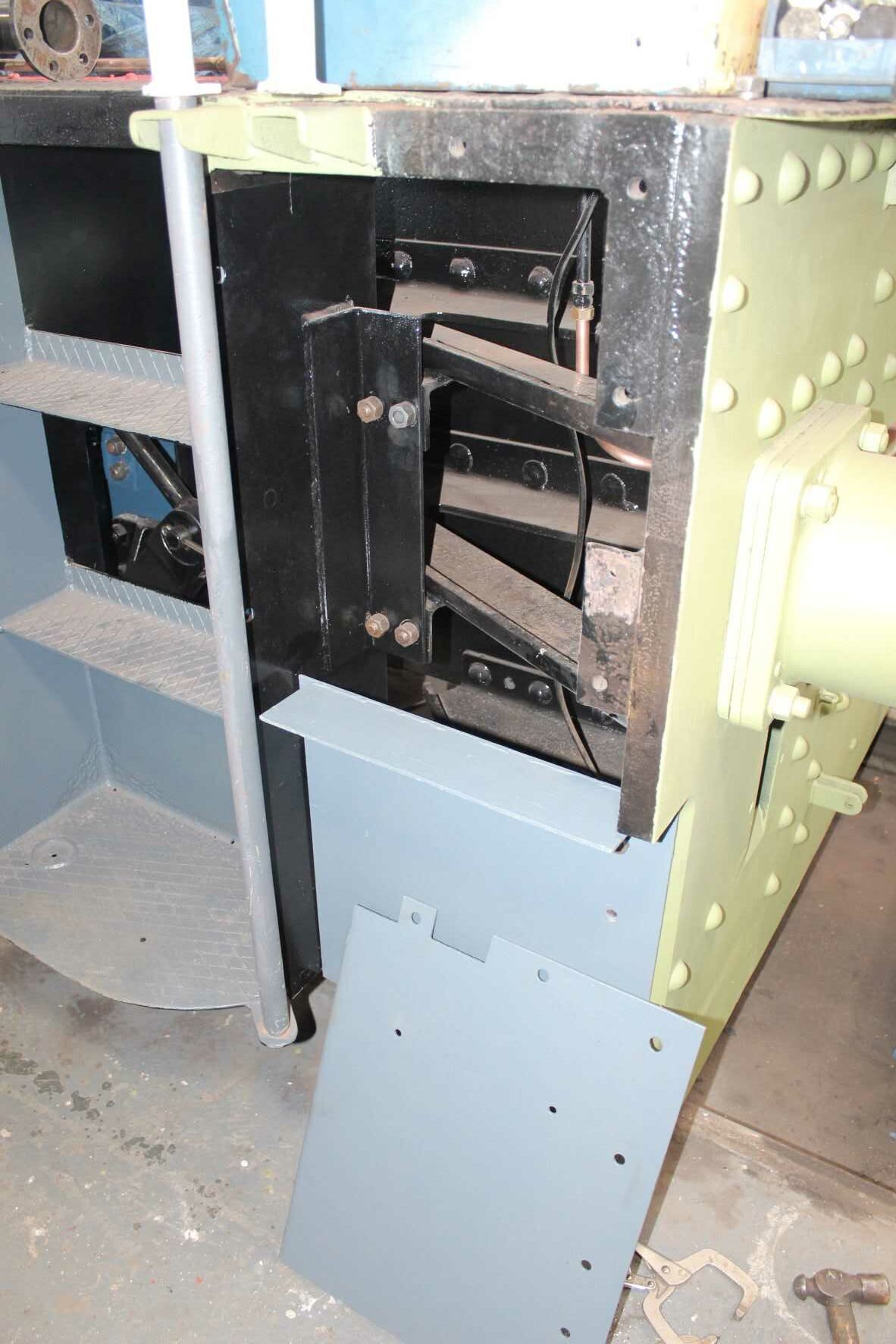 D9518 – the corner trim panels were prepared for refitting to the loco at Williton on Tuesday 19th April 2022. Photo by Terry Deacon © CC BY-NC 3.0 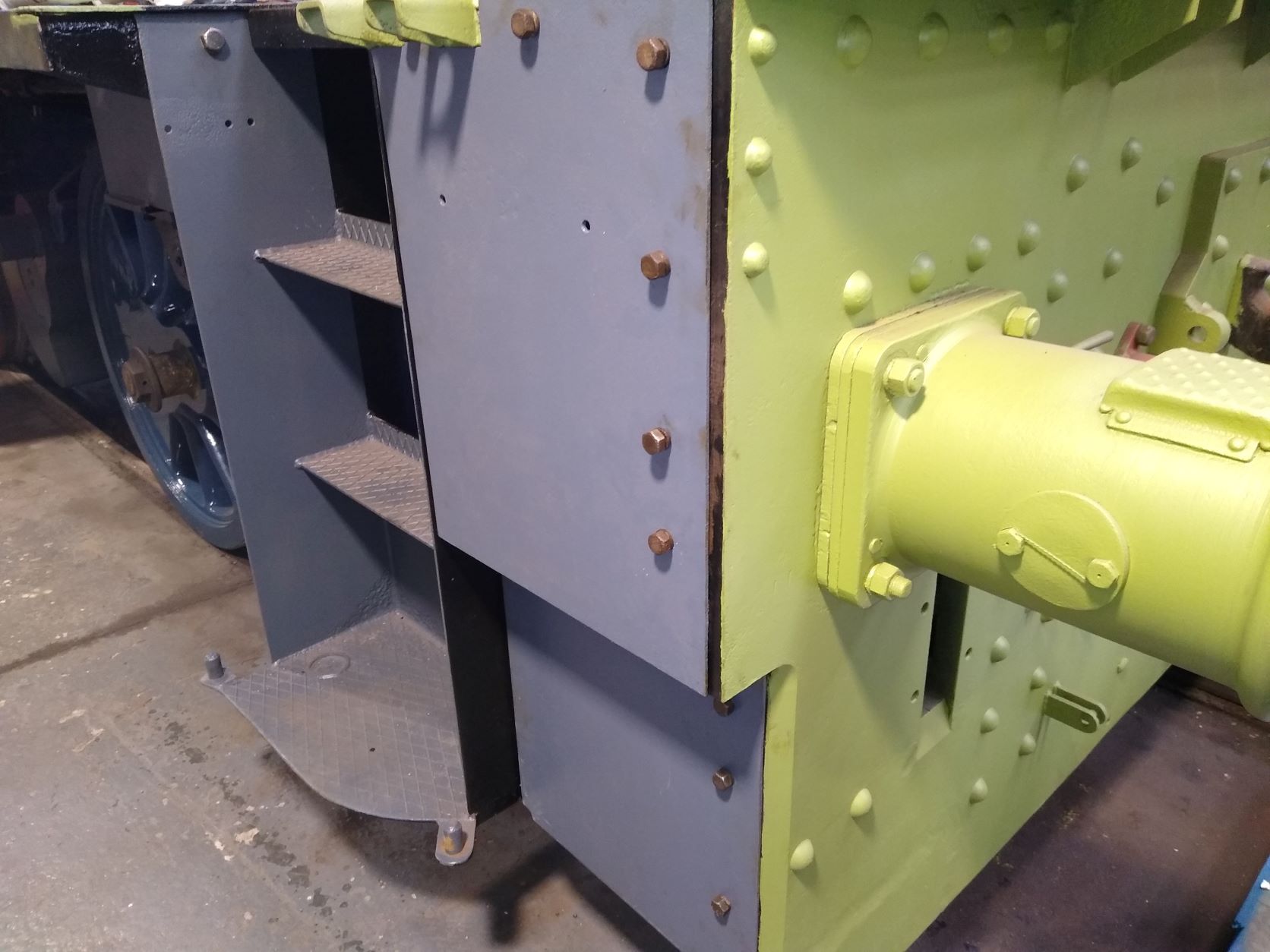 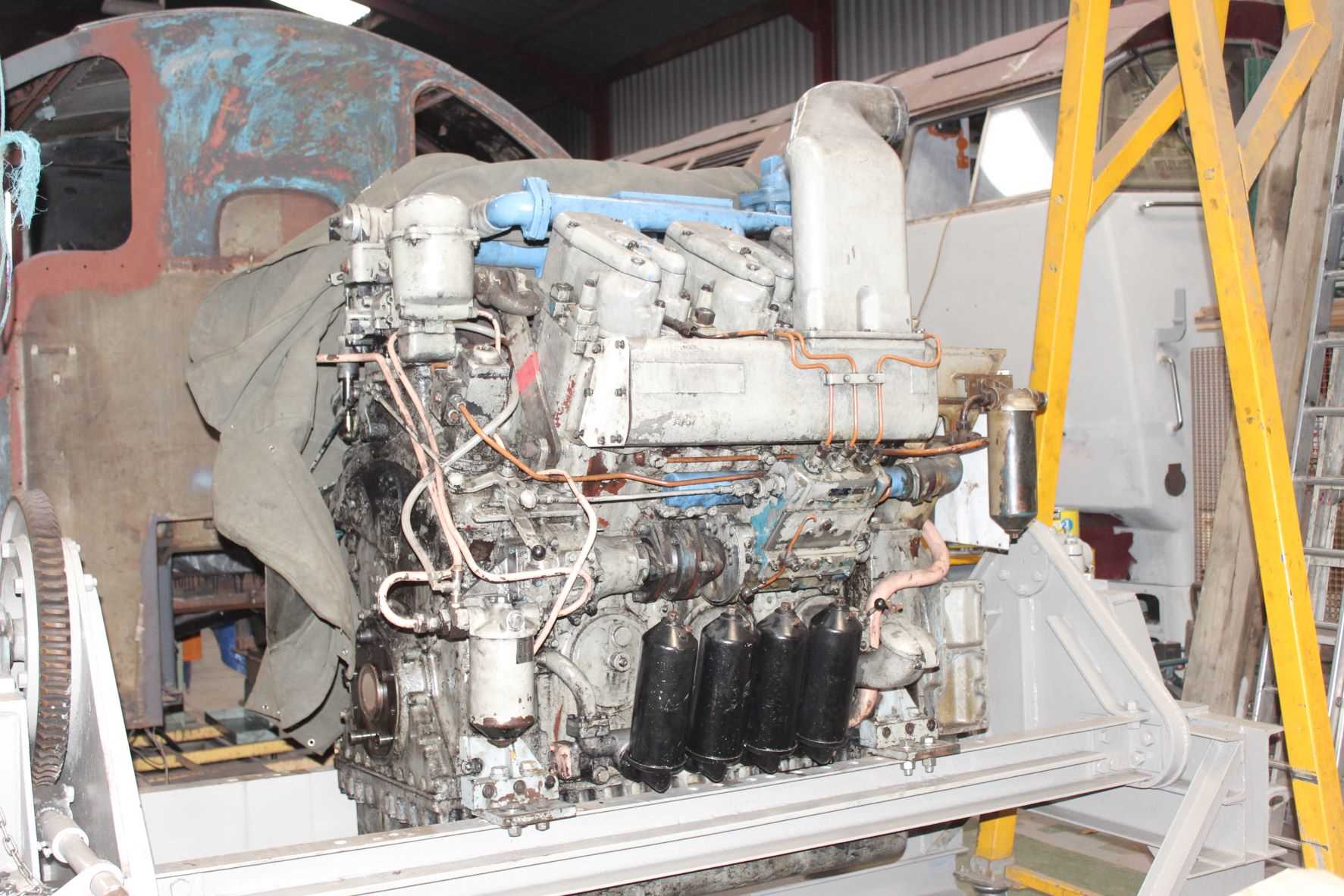 Class 14 ‘Teddy Bear’ D9526 – this loco continues to be in regular use on the Kent & East Sussex Railway. By agreement between the DEPG and the K&ESR, this loco will now be staying at the K&ESR for the rest of this year to cover for sister loco D9504 which is undergoing a heavy overhaul.

Class 47 47077 ‘NORTH STAR’ – this loco is currently stabled at Pickering on the North Yorkshire Moors Railway, and we are waiting for news about her moving to Grosmont to enter the loco works for completion of some overhaul tasks. The loco is expected to be readied for entering service in the summer of this year.

Continuing her visit to Williton is Bishops Lydeard-based Class 09 shunter D4107 (09 019) which is with us for battery replacement and electrical testing. The loco has had the old batteries removed and the battery compartments cleaned up, along with inspection and maintenance of her main generator. The new batteries are due for delivery this week and the loco will be dispatched back to Bishops Lydeard next week. Meanwhile, it is a pleasure having this loco adorning our yard. 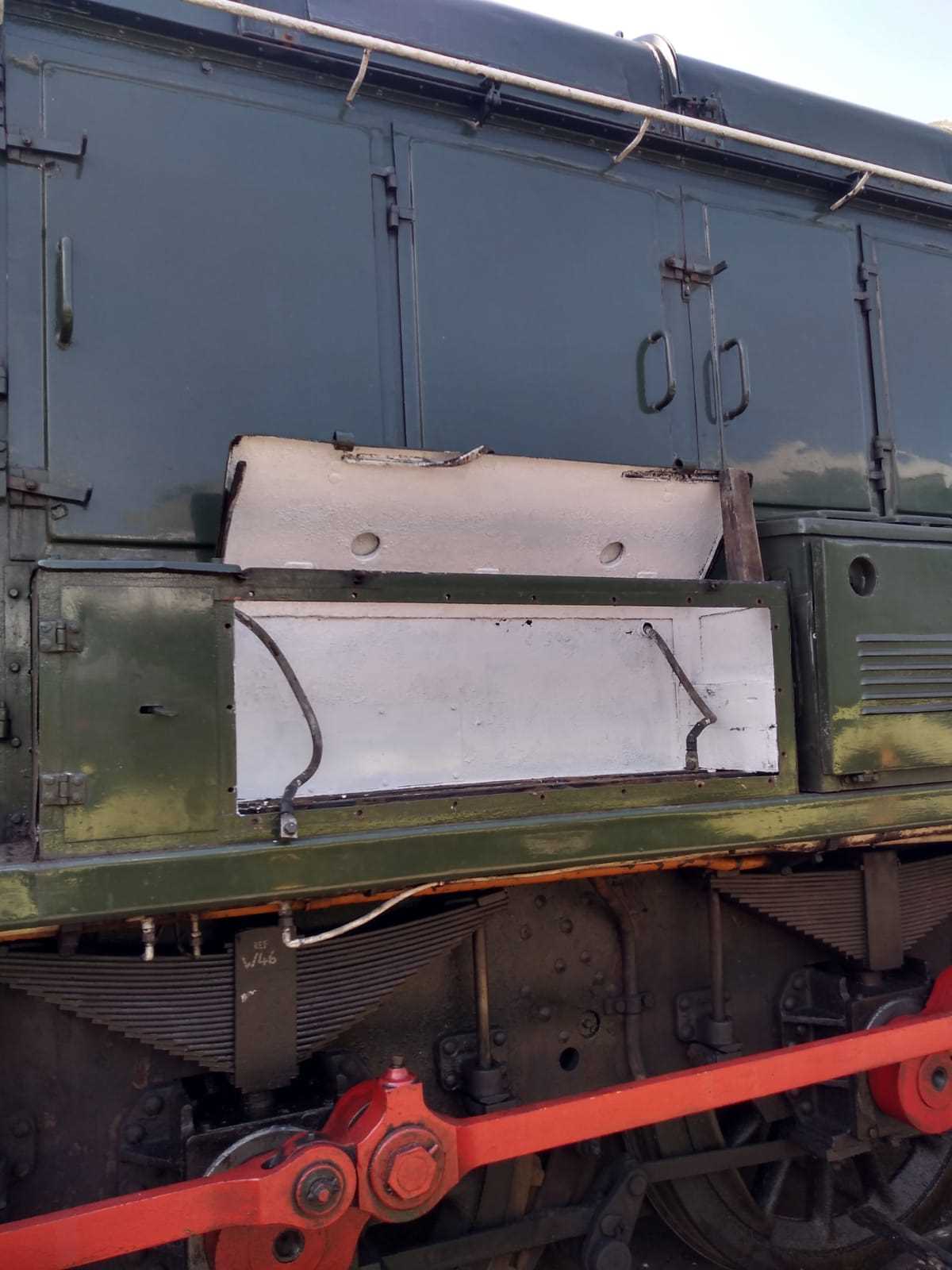 Can you help by donating your time ? If yes, please JOIN US and come along to the depot for an introduction to what we do and how we do it. We currently have people on site from Saturday through to Tuesday and we can open on other days if we can be sure of getting at least two volunteers on site at all times, so there is plenty of scope. We have tasks of all types to suit most capabilities, both skilled and unskilled.