BOOK REVIEW – 05-Apr-22 – this week, we include a detailed report by long-term member and regular contributor Neale Long, who has purchased this newly-released book and reports as follows: 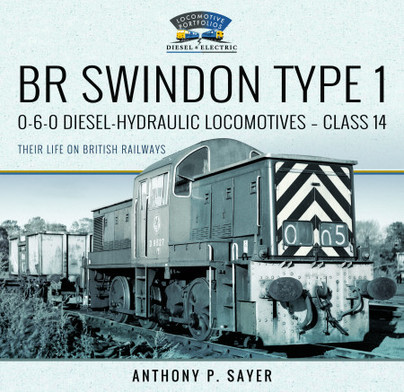 “For the latest in his series of locomotive profiles on some of the less successful early modern traction classes, Tony Sayer turns his attention to a class of locomotive with which the group has a very close connection, namely the Class 14 diesel-hydraulic locomotive. In view of the lack of published material on the subject, the author has produced a fine publication which sets out the history behind the class, production, introduction into service, performance, utilisation and ultimate demise. This being the first of two volumes featuring the class, this one exploring their history on British Railways (BR), the second volume will tell the extraordinary story of the class post-BR.

It is important at this point  to remind readers of the group’s (D&EG/DEPG) involvement with the class which started in the late 1970s following the successful purchase of ‘Hymeks’ D7017/18. The need for a locomotive that could be used without route restriction and gain a modest income was identified and a group member discovered D9526 virtually disused at Blue Circle Industries (APCM) at Westbury. A deal was done and the group (then known as the D&EG) had preserved the first class 14. With the rundown of the class at British Steel Corby, the group assisted with the restoration and operation of privately-owned D9551 until its subsequent sale. More recently, one of the fleet made redundant by the National Coal Board (NCB, British Coal) D9518 joined the DEPG fleet as a partner for D9526 and is now under long term restoration.

Much research was carried out by the group on the class prior to acquisition and it is pleasing to see that one of the sources of that research, the book “Class 14: The Cinderellas of the Diesel-Hydraulic Era” published by the group in 1980, being acknowledge as a source of reference for this new tome. Successfully restored and overhauled, D9526 in the meantime remains a popular and much loved member of the fleet at Williton with an enviable reputation for reliability. So, apart from the group publication and the occasional magazine article, the class was largely ignored by modern traction enthusiasts/historians in terms of any further substantial publication – until now.

Most modern traction enthusiasts will be aware of the class 14 story of a short life on BR followed by a rather more successful period of operation in industry, principally through British Steel Corby and the National Coal Board at Ashington. Ultimately and thankfully, this led to the potential of the class 14s being noted by enthusiasts, resulting in 19 examples being rescued upon their final redundancy at their second owners.

So, with interest in the class particularly in terms of preservation rising again, it is appropriate that Tony Sayer has now turned his attention to this class. The author, having produced several fine locomotive portfolios of other unheralded diesel locomotive classes such as classes 21/29, 15/16, 17 and 28, uses the same formula and format to produce this excellent study of the class. Along with the usual preface, acknowledgement, abbreviations, sources and references, there are 20 chapters:

The author, through primary sources, admirably tells the story of their short life on BR and the use of official documentation sets the story in context, most notably debunking the often repeated tale of the class being essentially redundant before they were built. The genesis of the class began in 1957, but as Swindon was pre-occupied with classes 42/52, the perceived need was not tackled until 1960 by which time privately built diesel-hydraulics had already been procured. Equally interesting was the legal requirement for BR to offer freight services until the 1963 Beeching report recommendations were implemented between 1964-1967. The author traces the official documentation from 1957 with the modernisation scheme submissions made by the WR to the BR Board and these make for fascinating reading with the WR desperately trying to increase the pace of modernisation against a backdrop of declining finances.

He then tackles the actual design itself and reviews the technical issues which affected the class, providing a fleet history of all 56 locomotives, complete with individual sightings. Of particular interest are the thoughts of respected railway engineer Brian Penny especially in regard to the transfer of 33 examples to the Eastern Region at Hull in order to hasten the demise of steam in that area. The transfer of the class to the Eastern Region is less well known but it is clearly set out in the book, fascinating to learn of the opposition to the proposal to operate the class on the ER, indeed at one point only two out of twenty locomotives were actually in use, despite them being officially sanctioned to work. Another fact that has come to light is that the ER were considering fitting the class with multiple working equipment. The book continues in the same vein unearthing more information about the class whilst in service, two spectacular derailments involving D9529 & D9542, service problems and reasons for withdrawal.

The book is very well produced with good use of diagrams and tables, all of which help to educate those not familiar with the story of the class. One of the most attractive facets of this fine book is that several people intimately involved with the class on BR, namely David Maidment, Brian Penny and Brian Rolley provided information for this account. Additionally, the thoughts of highly respected preservationists David Hartley  and John Hembry are included and add to the credibility of the whole volume. A wide range of both monochrome and colour images all help to tell the story, plenty of photographs of the Forest of Dean and South Wales, the rarest being of those in Hull and the colour images of D9506, D9513 and D9531 at Arnott Young scrapyard, Rotherham.

In conclusion, this is another fine publication from Tony Sayer to add to his earlier titles, focusing on less successful diesel locomotives and he has produced the most comprehensive account to date of this much overlooked and misunderstood class. All diesel-hydraulic enthusiasts, and indeed modern traction enthusiasts in general, will appreciate this long overdue appraisal of the class 14. Hopefully, the author will be able to complete the story of the class in large scale industrial use in the second volume. This book fills a  large gap in modern traction publications which until now had largely overlooked the BR Swindon Type 1, Class 14.

This title can therefore be recommended without hesitation.”

Click here for the book review covering the second volume. 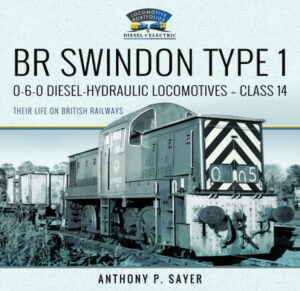 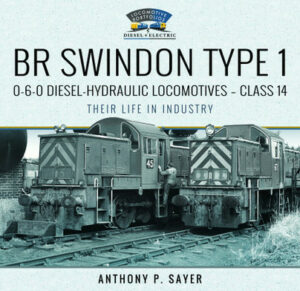