Another week of action and progress at Williton, the focus of activity being 47077 ‘NORTH STAR’ and Class 14 ‘Teddy Bear’ D9518. Restrictions on depot attendance remain in place but we again managed to operate on four days out of the last seven, minimising risk and making better use of facilities.

47077 ‘NORTH STAR’ – Efforts were made to get her massive Sulzer 12-cylinder diesel engine ready to start after a long period out of use. The various tasks that were in progress around the loco had to be stopped and put in a safe condition to allow power-up and start-up. The ‘triple pump’ was run to prime the oil, fuel and water systems and everything was looking good. Several volunteers stood by with their cameras, ready to take a video of the event. 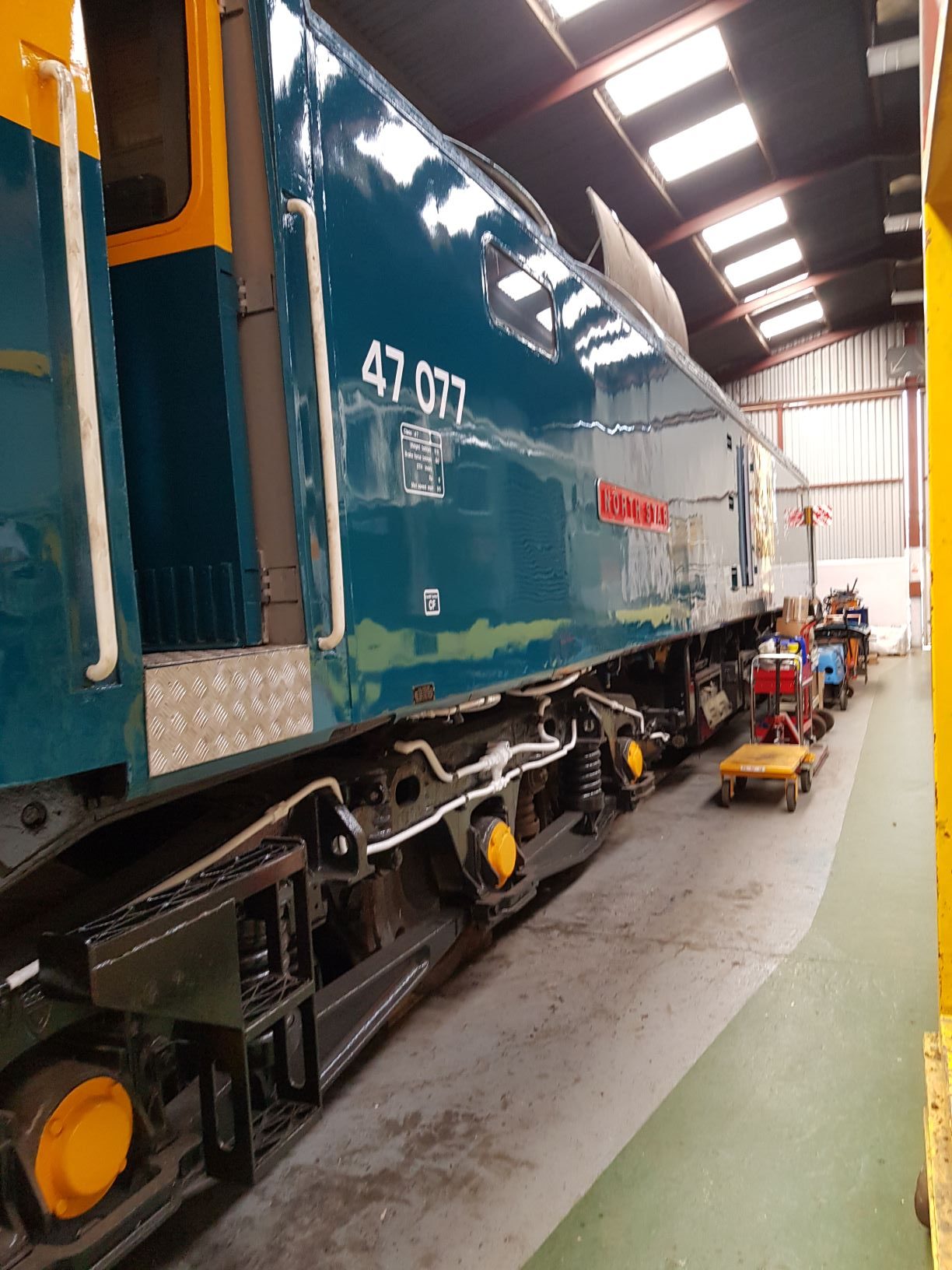 Unfortunately, when the moment came to press the ‘START’ button, there was a click – but the engine did not turn over. The batteries had decided that they were not going to co-operate and that was the end of it. Although the batteries had been kept in a fully charged condition over the last year or so, the combination of the age of the batteries and the lack of use has meant that charging had become ineffective, leaving the batteries too weak to be able to do their job. A locomotive without batteries is useless, so we now have to replace the 48 individual batteries that make up the full set.

Undeterred, our volunteers went back to their tasks and carried on, such disappointments being part of railway preservation life. Further attempts to start-up may be made this weekend using batteries borrowed from other locos and connected in parallel to boost capacity. Once started up, we will be able to complete our assessment of the work remaining to be done to get this loco ready for service.

Class 14 ‘Teddy Bear’ D9518 – The ‘Tuesday’ crew comprising Terry, Colin F, Chris and Mark continued on renovating the sandboxes and getting them ready to refit to the locomotive frames. On the weekend, Colin G continued his work on the wheelsets, filling and sanding the surfaces to provide a good smooth surface for painting. The rate of progress is very encouraging! 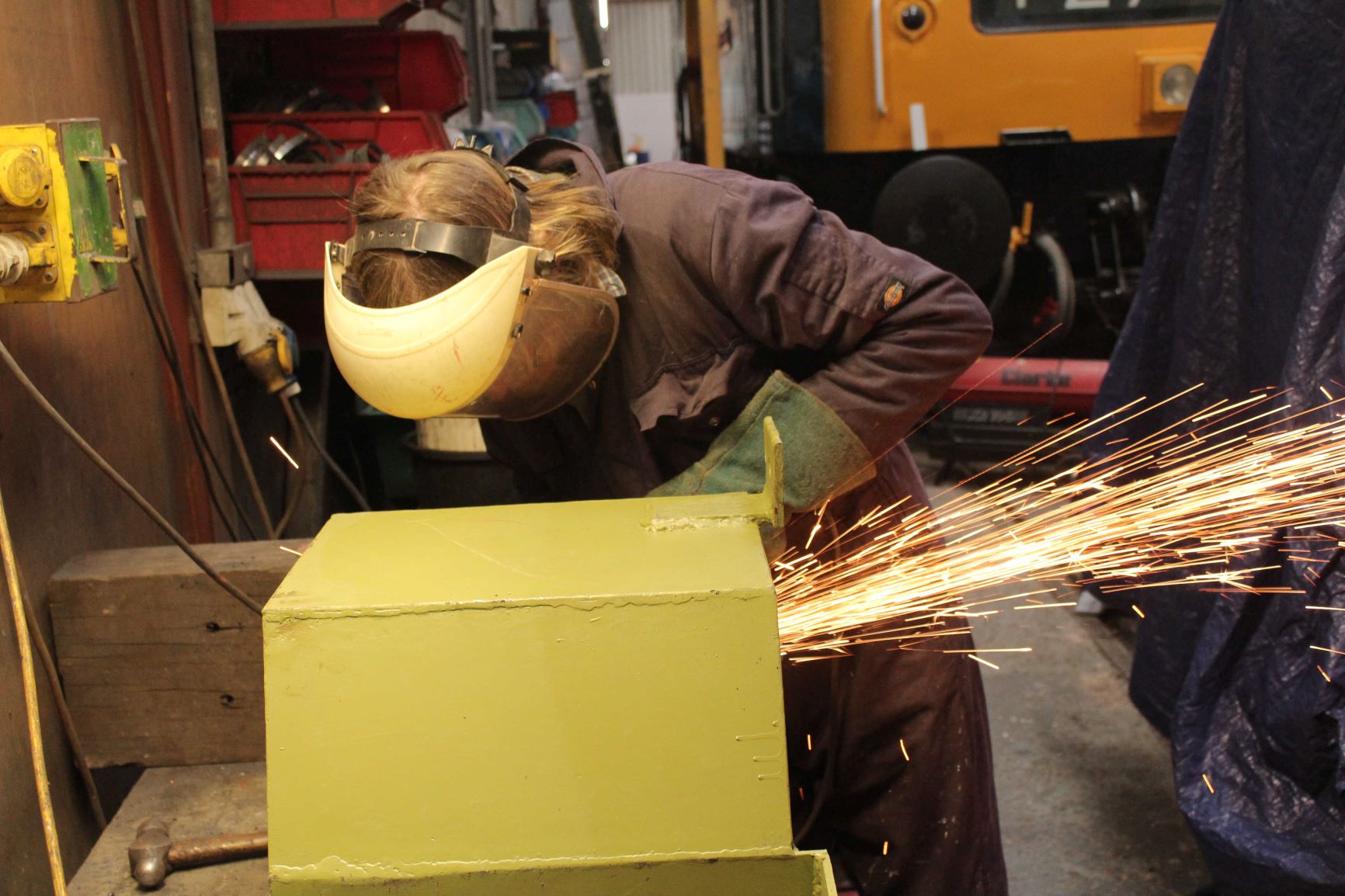 One of the sandboxes from D9518 gets some serious attention from Colin at Williton on 27th April 2021. Photo by Terry Deacon © CC BY-NC 3.0 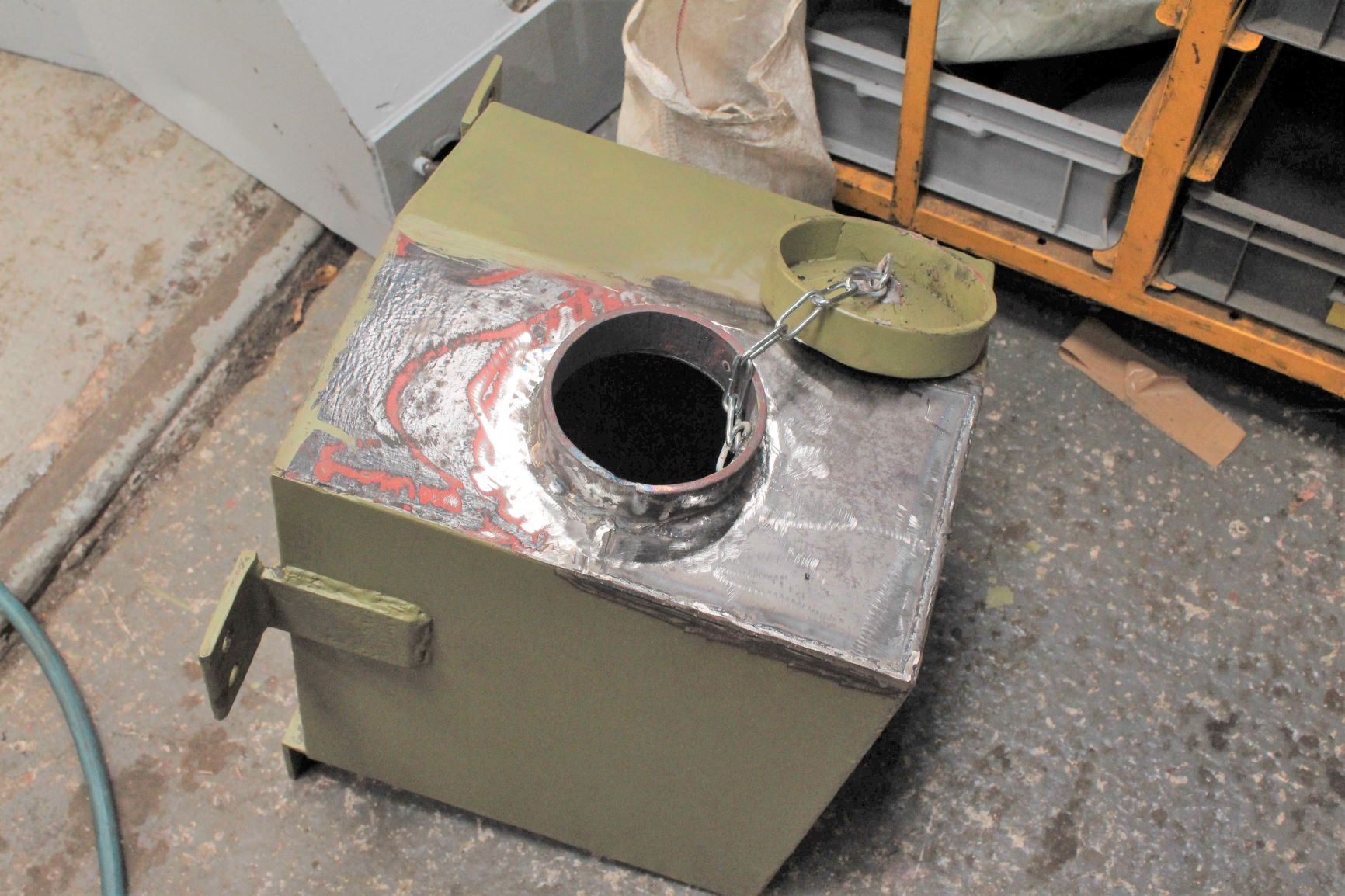 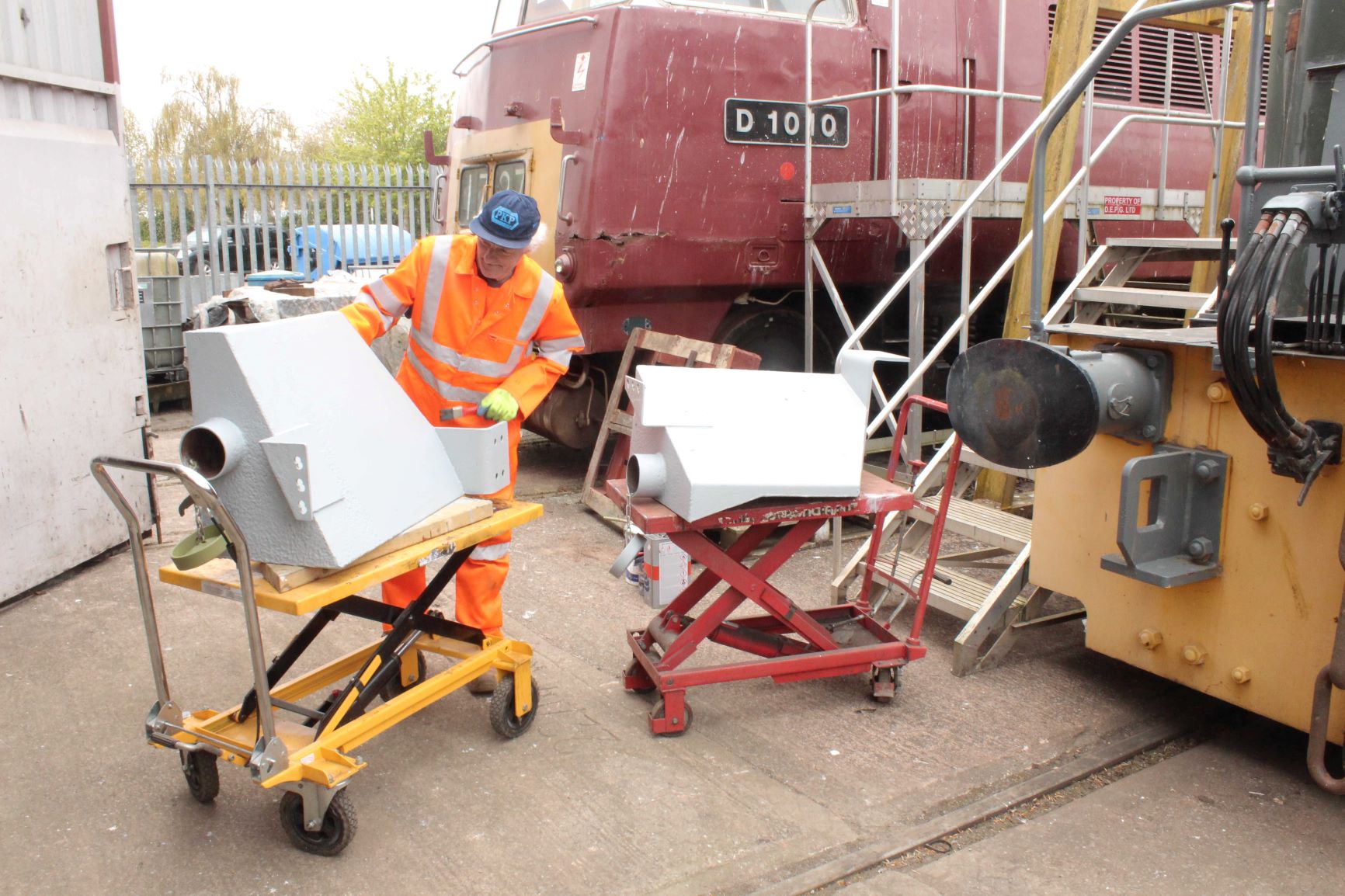 Chris makes sure that the sandboxes from D9518 get a good layer of undercoat at Williton on 27th April 2021. Photo by Terry Deacon © CC BY-NC 3.0

Class 33 ‘Crompton’ D6575 is in action this weekend on crew training specials between Bishops Lydeard (BL) and Williton (WN). This news was broadcast yesterday via our DIESELGEN email bulletin service. This loco will change places with sister loco D6566 (33 048) during Saturday afternoon and D6566 will then work back to BL and will also work the crew training turns on Sunday. An additional working that is scheduled for Thursday 6th May is an Empty Coaching Stock (ECS) move from BL to Minehead, where D6566 will attach to some newly-repainted coaches and haul them to BL in conjunction with BR(W) 4-6-0 number 7828 ‘ODNEY MANOR’. These moves are part of the preparation for the re-opening of the WSR on 22nd May 2021.

Class 35 ‘Hymek’ D7017 – this loco remains in the yard at Williton, having had her tarpaulins removed and having had a wash, courtesy of Ian. The plan for this loco is to be ‘lifted’ in late June or July so that her bogies can be rolled out so that the springs can be changed. No doubt there will be other work that will need to be done while the loco is lifted, but we hope to complete the work during the autumn so that D7017 is available for service in 2022. 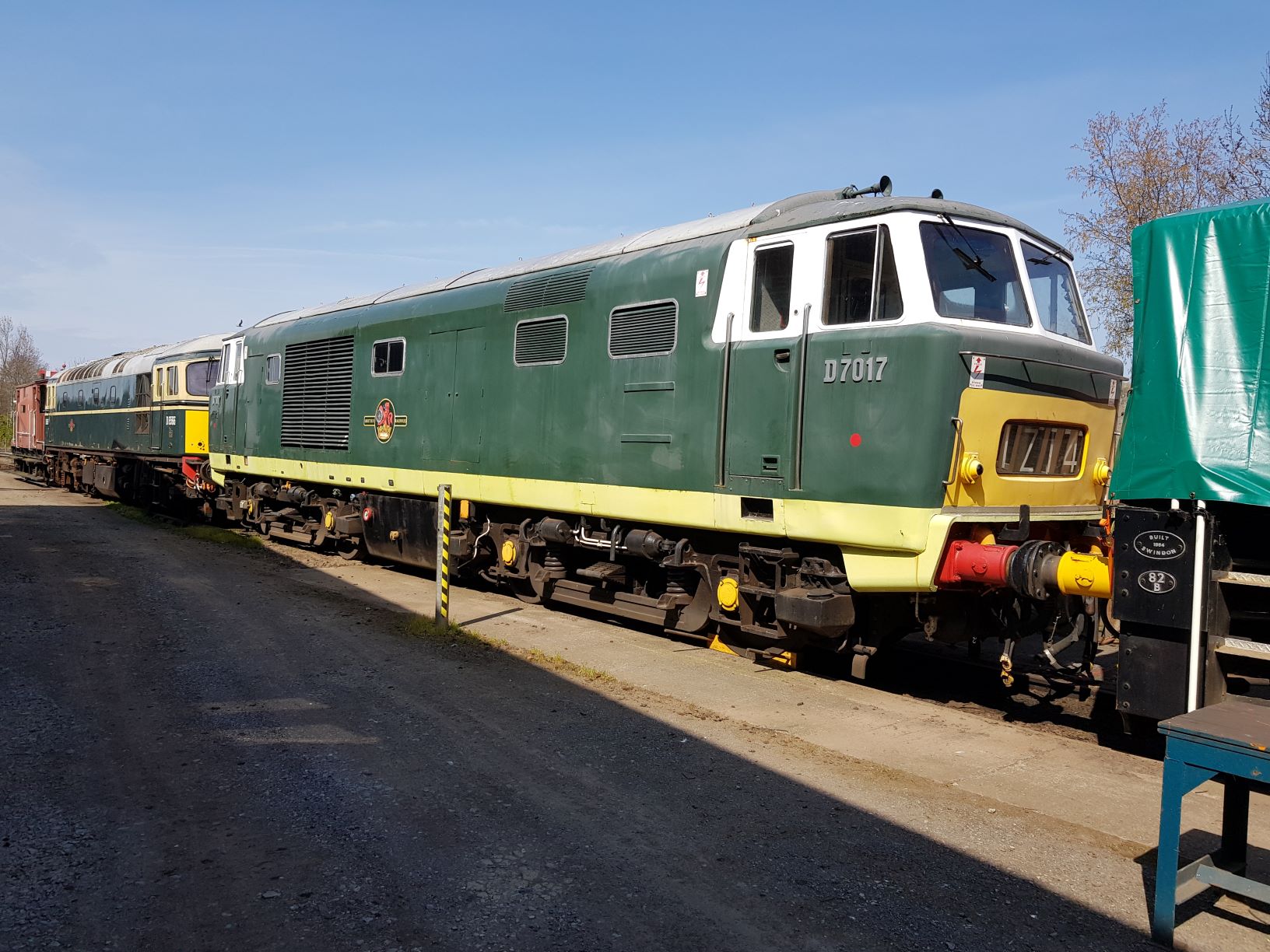 Class 35 ‘Hymek’ D7018 – this loco is inside the shed on number 2 road and is undergoing an investigation on the control block of her Mekydro hydraulic transmission. After several attempts to get the automatic gear change function working as it should, it has been decided to switch the control block for a known good control block that was in use at some time in the past. This will hopefully resolve the problem and allow more time for the delinquent control block to be further investigated to find the blockage (or stuck valve) that is preventing proper operation. In the worst case, the transmission will be locked in second gear and she will operate on the WSR in the same way as she did in 2019. 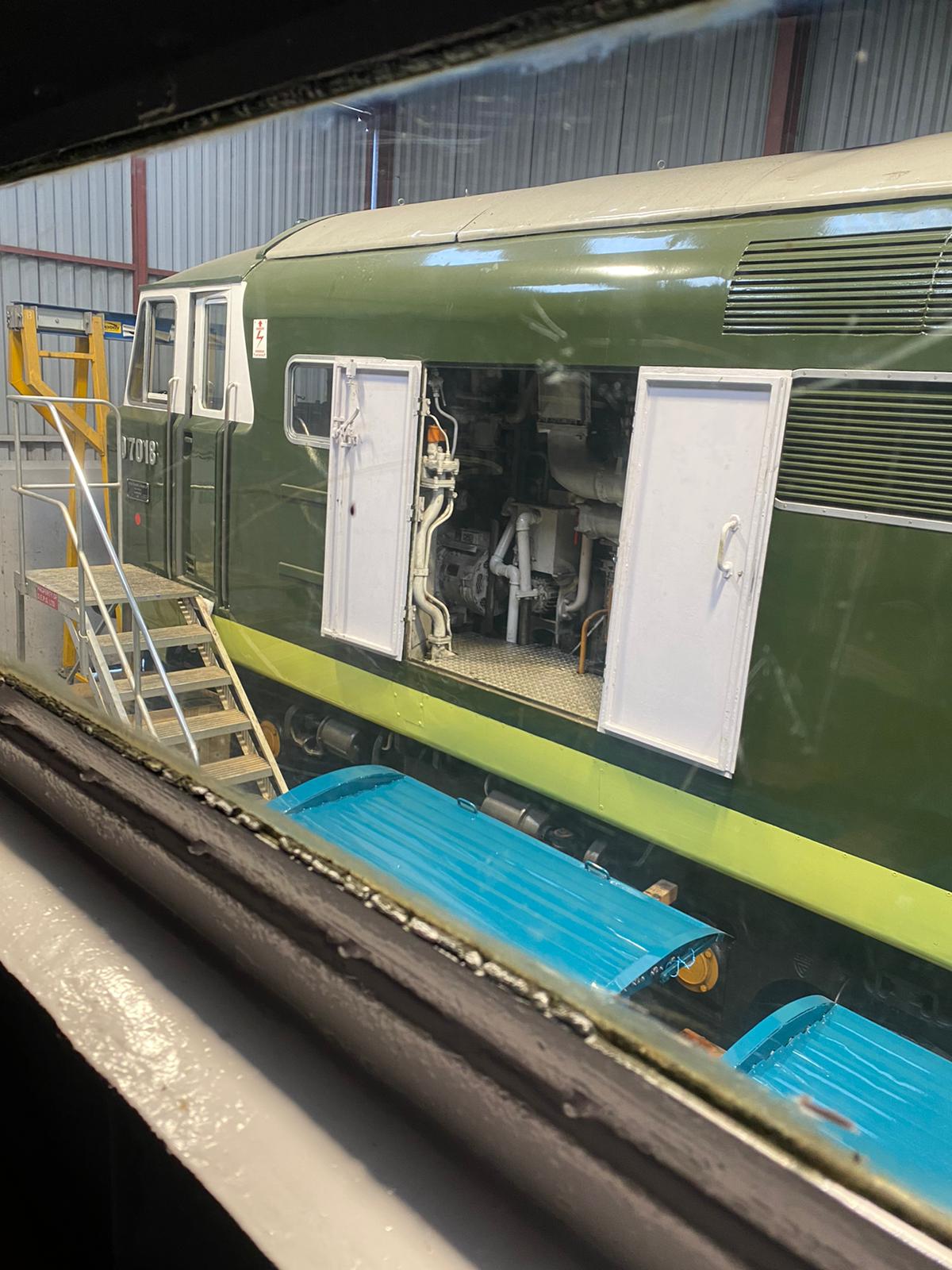 Class 52 D1010 ‘WESTERN CAMPAIGNER’ – this loco is waiting patiently outside the shed on number 3 road for her opportunity to displace 47077 and enter the next phase of her own restoration. With the remedial work on her failed transmission still held up by lockdowns, volunteer effort will be focused on the cooler group renovations and long list of bodywork repairs. This loco will be the subject of a fund raising campaign to cover the cost of specialist sub-contract services that will be needed to return this loco to service. The funds generated by our new booklet “D1010 WESTERN CAMPAIGNER – FROM MEREHEAD TO MINEHEAD” will go into this fund, along with revenue from sales of pre-owned books, so please help the fund grow by buying from our online store. Thanks ! 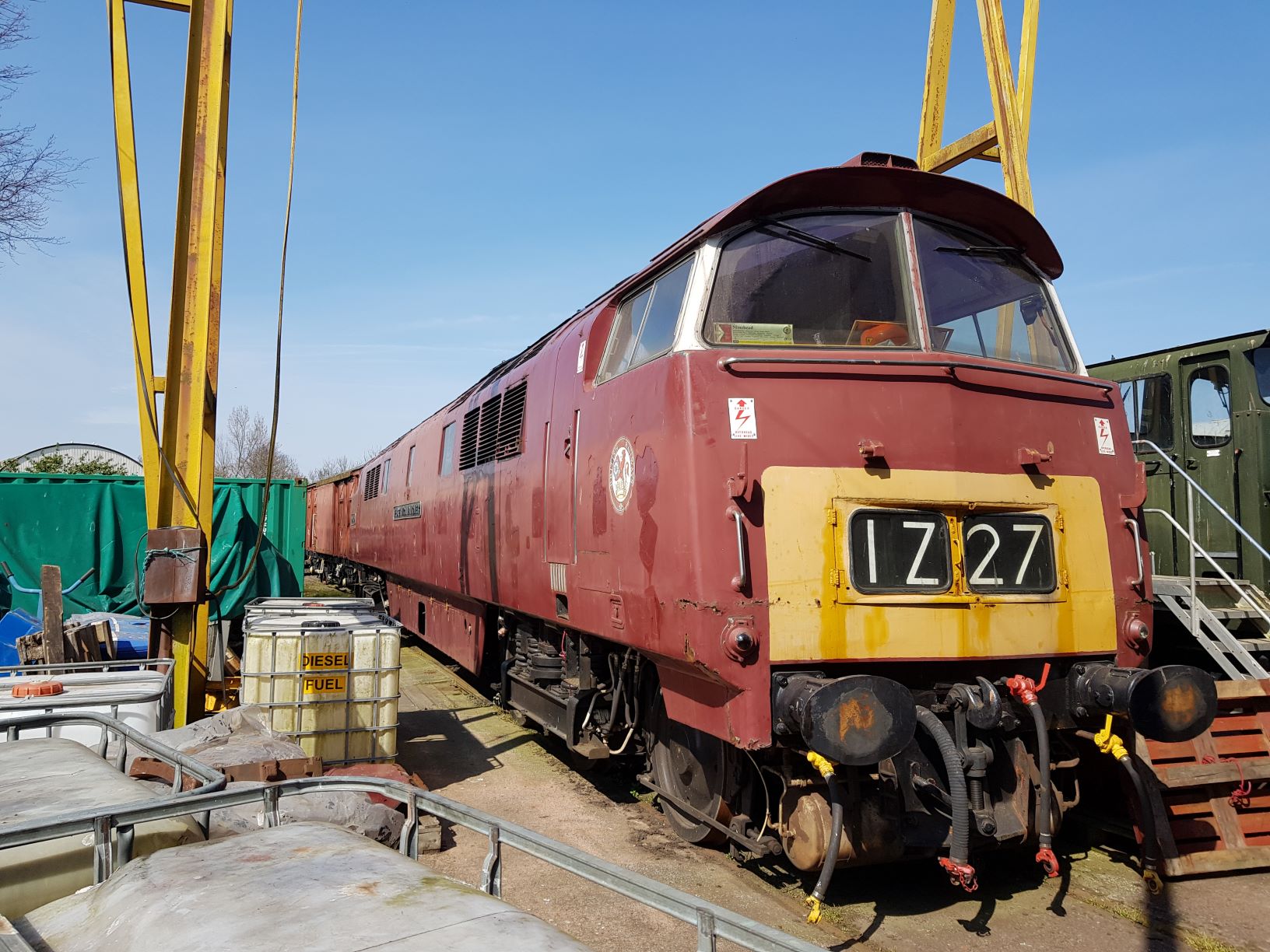 Class 52 D1010 ‘WESTERN CAMPAIGNER’ outside the loco shed on number 3 road at Williton on 20th April 2021, minus her lower front valances (already removed for restoration) and clearly in need of some bodywork repairs. Photo by Chris Shields © CC BY-NC 3.0

Class 14 ‘Teddy Bear’ D9518 – information that was posted on rmweb earlier this week reminded us that our loco was the LAST of the class to perform work on BR back in April 1969 and one of the last ten to be withdrawn from service. Here’s an extract of some posts made by rmweb member “br2975” :

Many thanks to Neil Evans and to rmweb member “br2975” for bringing this information to our attention. After serving BR for a mere four years, our loco went on to do seventeen years of hard labour at NCB Ashington Colliery before retiring and eventually coming into our hands. 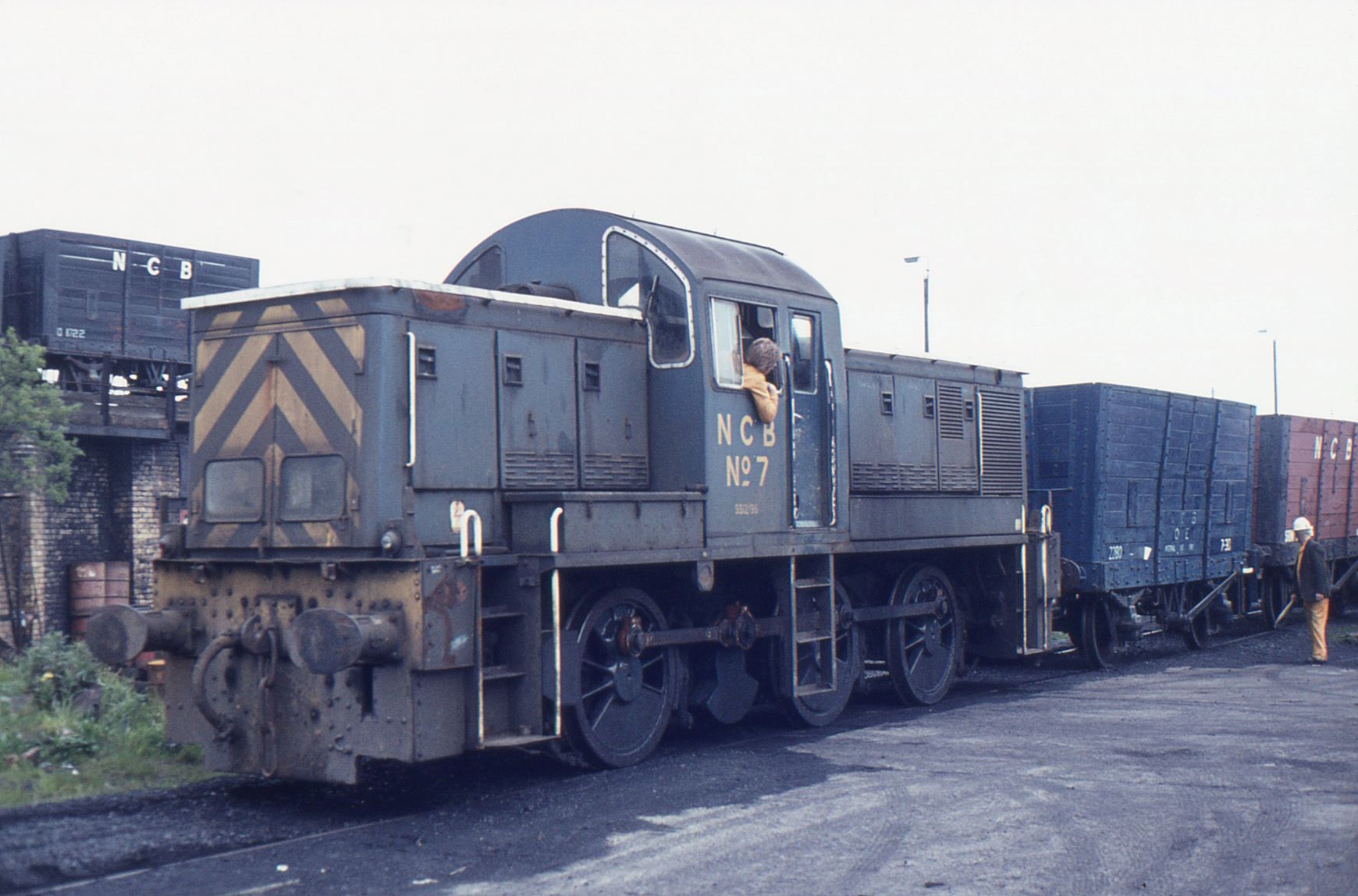 Class 14 ‘Teddy Bear’ D9526 – this loco remains hidden by tarpaulins on number 1 road, just outside the Old Goods Shed after being ‘evicted’ from its shelter because of the structural issues that are currently affecting that Grade II listed building. This loco has undergone a 250-hour inspection and is waiting for a test run to Bishops Lydeard so that she can go over the pit at Westridge shed and have an underframe examination. After that, she will be ready for service !

Many thanks to all of our volunteers who are hard at work maintaining, restoring, managing and fund raising for our fleet of heritage locomotives !

BOOK REVIEW – This week, we have another pre-owned book to offer via our online store, but this one is rather unusual and appears to be quite rare. “TRIBUTE TO THE FORTY’S – 1958 to 1986” is a paperback booklet, A5 in size (21 x 15 cm) with 100 printed pages and more than 200 photographs, all in black and white except those on the cover page. The booklet was published by the CLASS 40 APPEAL in 1986 and was clearly a success because seven members of the class have made it into preservation, including two mainline-registered examples. 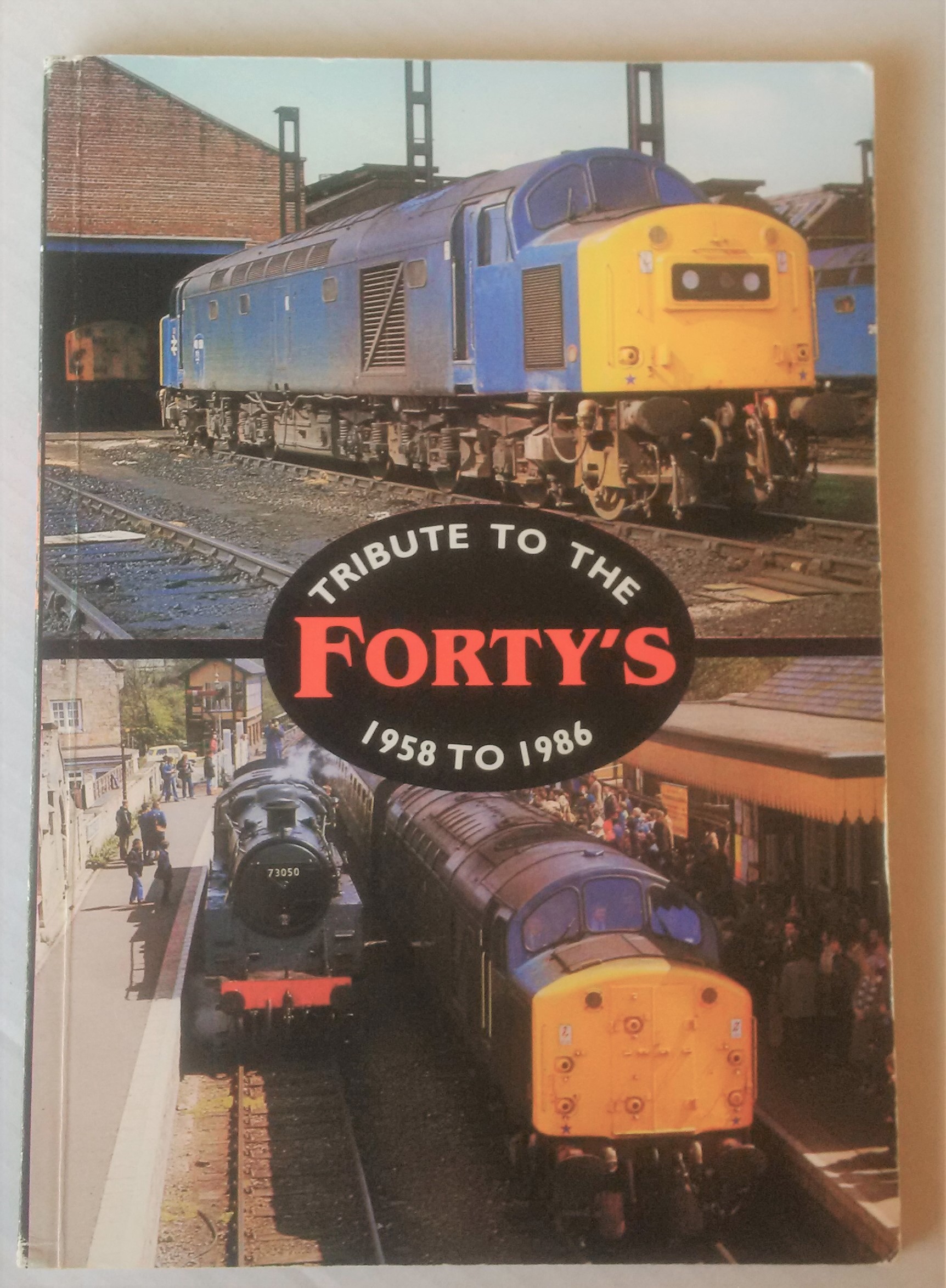 This rare booklet has been very kindly donated to the DEPG for the purpose of fund raising, so we are offering it at £15, the entire proceeds of which will go to the D1010 restoration fund.

If you have railway books that you want to donate to us, please let us know by return email or by using this contact form so that we can work out an economic way of getting them from you. We appreciate your efforts to give us more items to sell to raise funds for the DEPG fleet.

ON SHED: We didn’t have time to include our usual ‘On Shed’ feature last week, but I felt a bit annoyed with myself afterwards because I found that the very next day, Monday 26th April 2021, I had a note to release an ‘ON THIS DAY …’ post to share two photographs that were taken exactly 40 years ago, so after waiting all that time, I missed the boat ! Here they are today instead. 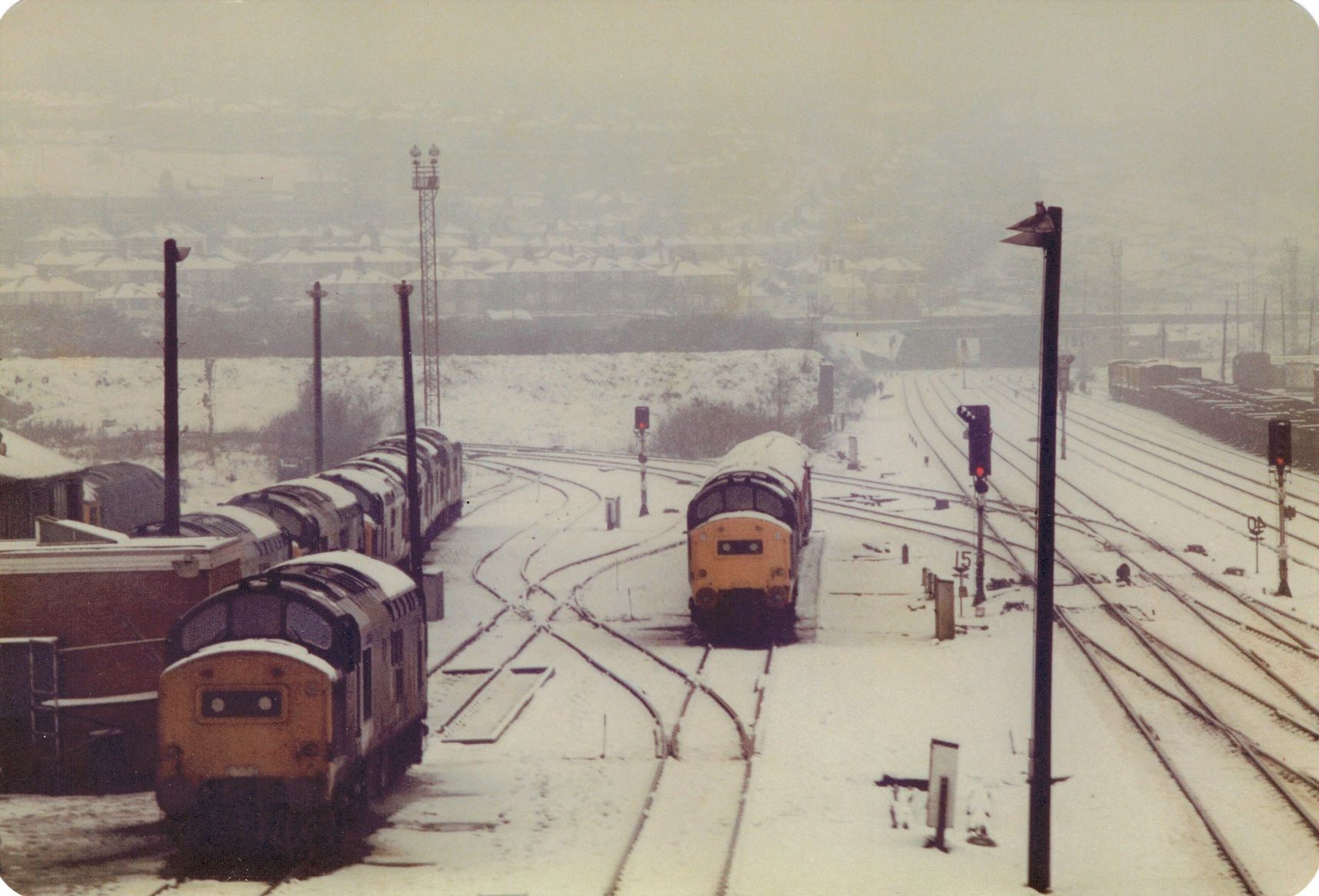 FORTY YEARS AGO – there was an unexpected snowfall at the end on April, blanketing many parts of the country, including South Wales. This view of Ebbw Junction depot, on the western side of Newport, shows seven Class 37s and one Class 47, probably 47 901, at rest on the morning of Sunday 26th April 1981. The line going left is to Ebbw Vale, the four track South Wales main line is to the right, and Alexandra Dock Junction sidings are on the far right. Photo by Andy Royal © CC BY-NC 3.0 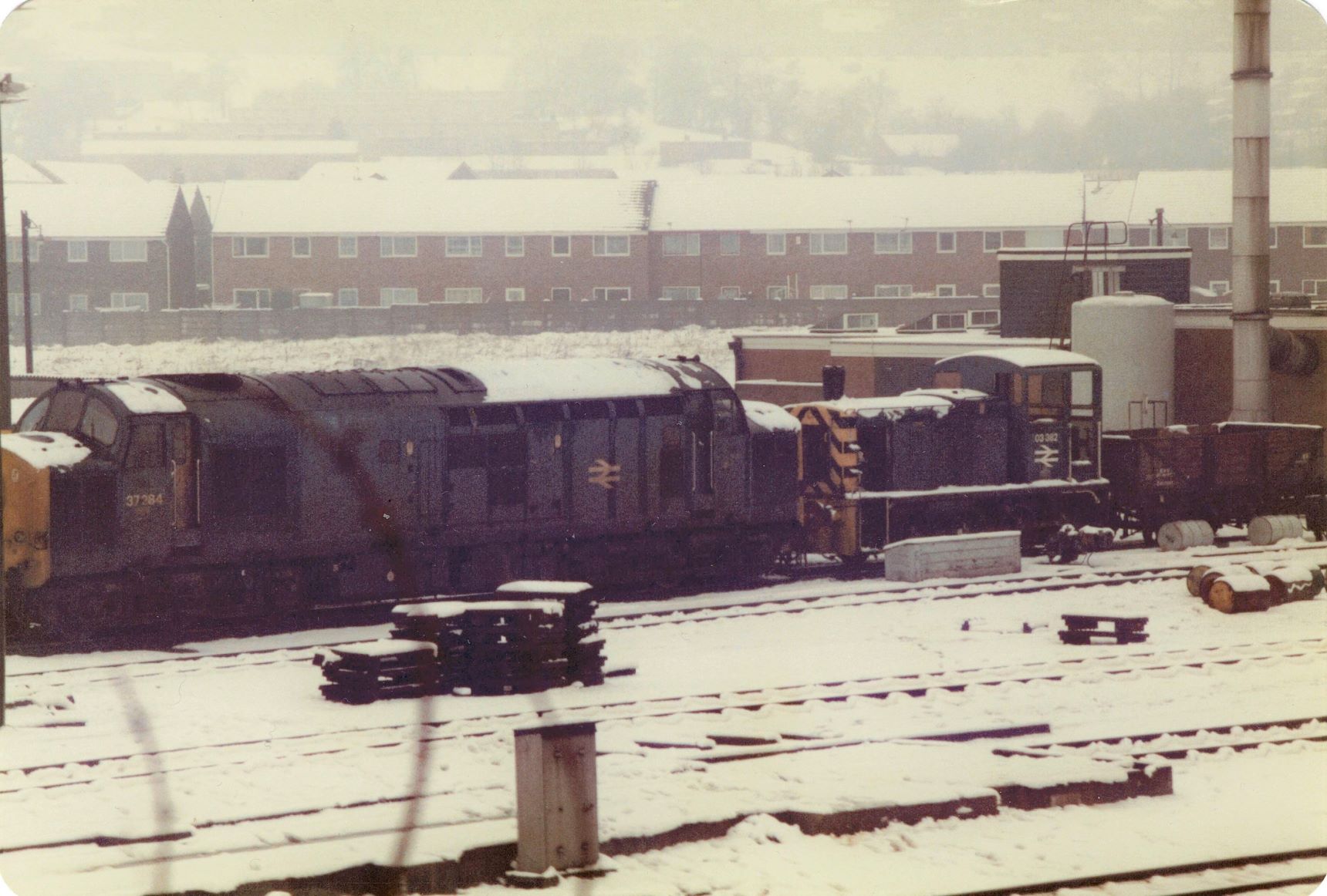 FORTY YEARS AGO – 37284 rests at Ebbw Junction (EJ) depot on the morning of Sunday 26th April 1981 along with 03382, a loco that was destined for use on the Burry Port and Gwendraeth Valley line in West Wales. Low bridges on that route meant that the 03 needed her cab cut down, so for reasons unknown, that task was allocated to EJ. The loco had come from Bristol Bath Road and hung around the depot for months before being modified and then heading west. Photo by Andy Royal © CC BY-NC 3.0

DEPG NEWS: The DEPG held a Board Meeting last Saturday, partly on site and partly by Zoom, and a synopsis will be prepared and included in next weeks’ roundup.

Last week, we asked this question …. which railway magazines do you buy on a regular basis ?

We had several replies so we say thank you to those respondents, but we did not get enough responses to make a clear picture. Please reply to this email with the titles that you read and we will collate the results and share them in a future roundup. Thanks !

Membership – is your membership up to date ? If not, please renew by going to our Join Us page and selecting the appropriate membership ‘product’. This is a quick and easy way to keep your membership current. It doesn’t matter if you don’t remember your membership number – we will sort that out for you.

DEPG WEBSITE: Our ONLINE SHOP IS NOW LIVE so go ahead and visit our store!

Our new booklet, ‘D1010 – FROM MEREHEAD TO MINEHEAD’ is in stock so get your copy now! This booklet covers our Class 52 D1010 ‘WESTERN CAMPAIGNER’ and its life in preservation, from Foster Yeoman’s quarry at Merehead to the West Somerset Railway to Minehead plus some interesting stories from the days when the loco was still working on the mainline. All proceeds go to the D1010 restoration fund. 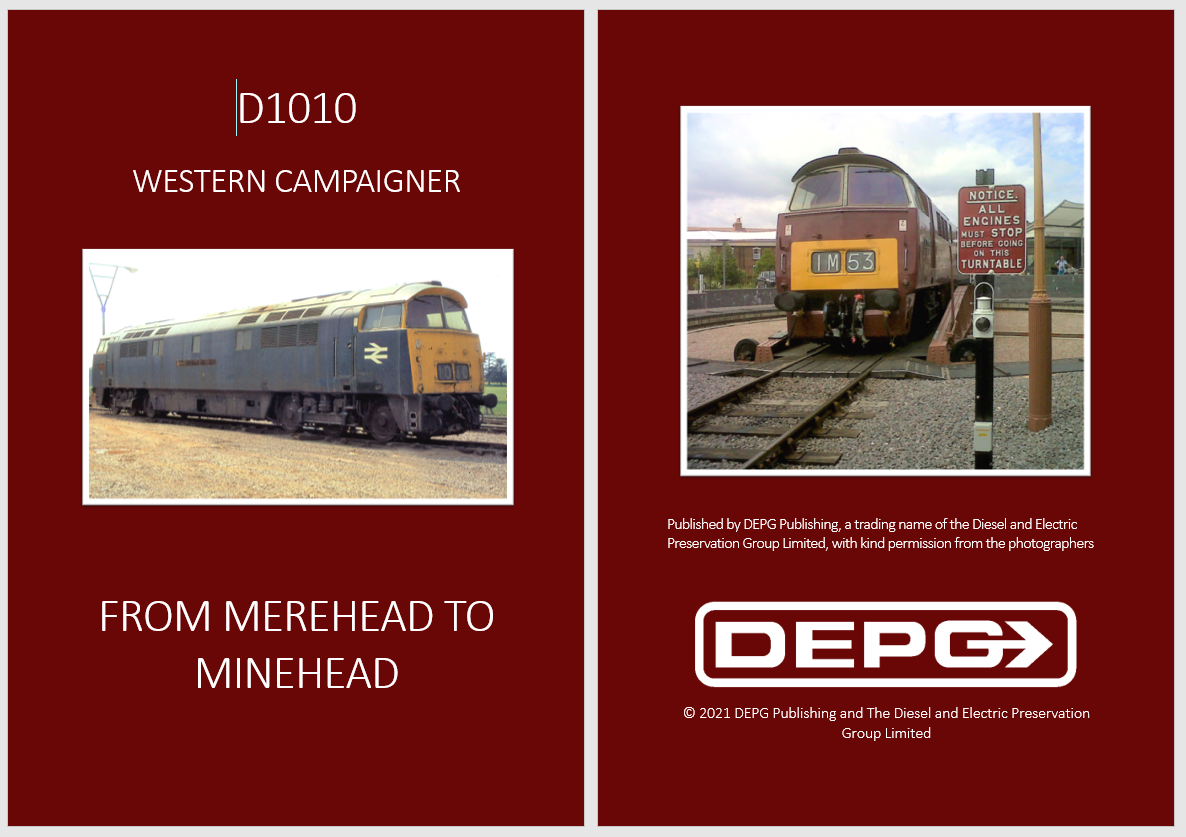 WSR NEWS: The WSR ran another of their popular Zoom sessions for volunteers last week and again it was well attended and very useful and interesting. We applaud the WSR for their investment in time and effort to hold these very informative sessions.

Traincrew training activities continue with diesel haulage this weekend, as reported earlier. The weedkilling train will run this week to avoid a repeat of last year where volunteers spent many back-breaking hours performing hand weeding along the whole 22-mile length of the line!

The priority is to ensure that everything is ready for the return of public services on Saturday 22nd May 2021. These ‘excursion style’ services will run between Bishops Lydeard and Williton and must be pre-booked via the WSR website. It is really important to support the WSR to ensure that these services are a commercial success. Please buy a ticket if you can. Thanks !